Perhaps the biggest difficulty when retelling a well-loved classic is finding a unique flair which will encapsulate a modern audience.

Sarah Punshon’s adaptation of the story does exactly that by capturing the magic of the original source whilst being brave enough to step outside the traditional frame of the narrative.

For this outing, the production takes place in Bolton’s Octagon Theatre which centres its stage in the middle of the room, presenting the audience with a great view so you can’t miss out on the action.

The show tells J.M Barrie’s original tale mostly as how we all remember it; a magical flying boy called Peter Pan embarks on an adventure with Wendy across the magical Island of Neverland, encountering the wicked pirate Captain Hook, joined by a fairy named Tinker Bell and a group of Pan’s followers named the lost boys.

But it’s the outstanding performances from its cast that make the show truly special. 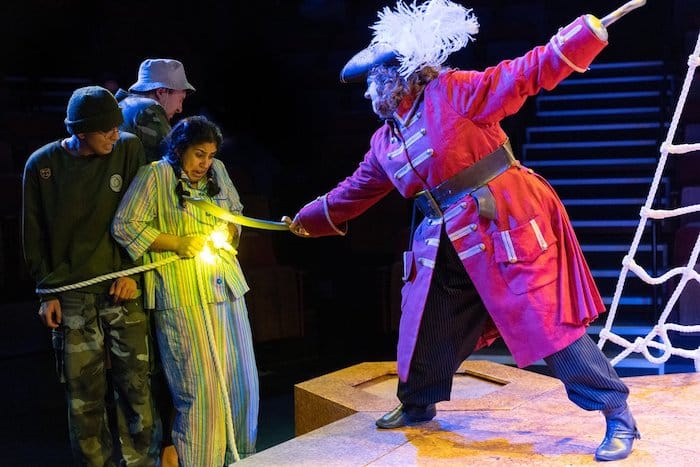 The gender-blind casting across the many characters is spellbinding and it works brilliantly.

Despite appearing small, the set design is colourful and visually impressive, the five actors manage to keep the show moving at a good pace as they each add new props and change the surroundings to fit each new scene.

High flying acrobatics, humorous dialogue, ingenious use of on-set props and a larger than life clock-swallowing Crocodile is enough to immerse you into Neverland.

However certain songs did feel unnecessary and a little bit drawn out in parts, but the impressive vocals from its cast saved them from walking the plank.

Throughout the show, the children and adults alike were both well engaged with all the interactions between themselves and the actors; I even found myself getting off my feet to partake in a Mexican wave!

Each of the actors brought a great deal of passion, humour and originality to their roles making it hard to pick out a standout performance.

With tickets from £15, Peter Pan is a wonderful show which will make for a great festive treat for all the family.

Peter Pan is on at the Octagon Bolton until Sunday 9th January 2022. Tickets are available here.