Review: The Newspaper Boy at 53two 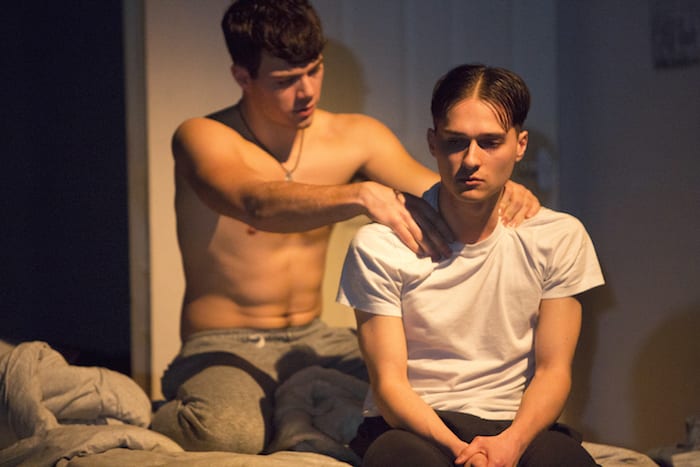 Chris Hoyle’s The Newspaper Boy is filled with nostalgic references to adverts from the early 1990s that give us a rose-tinted view of the past. Wispa, Mr Kipling, and Wrigley’s chewing gum amongst others.

But behind the facade lies something less feel good – the tabloids’ desire to out famous people, and the effect it has on their families.

The newspaper boy in the title is Christian Dibimore, a working class lad from Moston who is riding the crest of a wave in a northern soap opera, Mancroft Walk. Popular with viewers, his scripts start to contain more dialogue, and he is paired up with Mandy, who plays Rosie Chadwick.

Off screen they become pals and she introduces him to drink, parties and Canal Street. Suddenly, Christian finds himself tabloid fodder, following his relationship with Mandy’s gay half-brother Max. Why? Because Christian is 15.

But the nuanced writing from Chris Hoyle gives the audience something real to grab hold of. The characters don’t act like people in a play. They seem authentic.

Part of the story is based is on Chris’s brief time in Corrie as a child actor, when the tabloids found out he was caught in possession of cannabis.

And this means that there are little nuances which speak volumes throughout.

Daniel Maley’s Christian is always awkwardly touching up his curtain-style hair. Hollie-Jay Bowes (Mandy) frowns whenever anyone does let her get own way, and this fills in gaps for the audience, as she has been in Mancroft Walk since she was a baby.

Samantha Siddall holds court as Christian’s mum, brilliantly brittle one minute and as soft as a new pillow the next.

All the performances are incredibly naturalistic and like a brilliant episode of The Royle Family. It’s almost as if you have a place on their couch.

Sam Retford plays a blinder as Max. He gives a fully rounded turn as someone the press portrays as a predator, but we see his soft side, and the fact that Christian hunts him down and he resists at the beginning. The chemistry between these two reminds you of Jonathan Harvey’s Beautiful Thing.

There are a couple of scenes that add very little. One in the TV studio, when Christian gets a ticking off by Eve Steele as the under written Dawn, goes on way too long. And the first act tries to pack too much in, leaving you in no doubt what is going to happen at the end.

These are minor niggles, though, as there are some killer lines and some brilliant observations.

When Christian discusses when he realises he is gay, and recalls his past, he says he watched The Blue Lagoon and didn’t know whether to look at Brooke Shields or Christopher Atkins first.

His nan, played with a real glint in her eye by Karen Henthorn, talks about a lipstick lesbian she knows of whose partner who ‘looks like the Incredible Hulk!’

53two is a really welcoming venue and a more open space than most theatres, so the audience is different from the usual theatre audience and generates a genuine atmosphere for a play like this.

Funny, incredibly poignant towards the end, and filled with likeable characters, The Newspaper Boy is one of those plays that makes you proud to live in Manchester. There’s nowt as queer as folk. This city welcomes everyone and thank Manc for that.

The Newspaper Boy is at 53two until 24 February.