One of the city’s most quietly impressive restaurants... 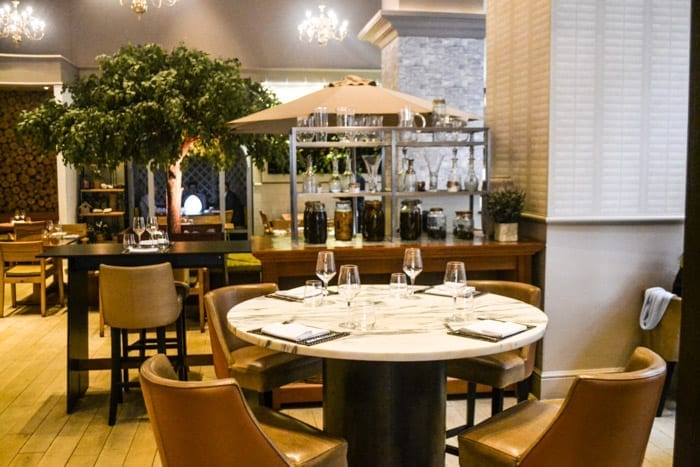 The first thing you notice about Mr Cooper’s House, nestled inside The Midland Hotel, is the 30 foot tree that sits within the restaurant.

It’s a botanical statement, but perhaps surprisingly, doesn’t alter the elegance of the room, nor deny it space and light.

‘one of the city’s most quietly
impressive restaurants.’

In fact, there’s an awful lot of that in Mr Coopers – which means there’s plenty of room to stand back and admire the food.

The bar and restaurant is divided into sections that represent different areas of the former house and garden of Mr Cooper, who came from a family of coach makers and in the early 1800s, had a garden on this very site,

There’s the library, study and lounge. The dining room, surrounding that tree, is fashioned on the famous green space that was often used the public for picnics on special days of the year.

Mr Coopers in its current form is the second project in Manchester’s historic hotel by Simon Rogan.

After declaring his fine dining ambitions at The French; Rogan wanted to use Mr Coopers to present a more casual and reasonably priced menu, with no style of food off-limits.

It’s Rogan’s version of casual of course – which means the menu is an extremely refined modern three-course a la carte affair with the skill and invention you’d expect.

Where Rogan often sticks to local ingredients, in Mr Coopers, they come in from everywhere and anywhere. Descriptions of dishes are suitably theatrical and impressive.

I met my companion in the bar/library area where I found her comfortably sipping her signature glass of Prosecco in a classic glass. Being a respectable lady in the city, it’s always my duty to treat her like the queen. Not a good start as I turned up late – not that she minded that much, as the bar is a great place to day dream into an aperitif.

Finally, after a few giggles, we were escorted to our table by the very charming manager Fernando.

After breaking the menu down with a few American Psycho impressions, we firmly decided on our 3 courses. For starters, my lady chose avocado and sweetcorn relish, crab kataifi, red pepper sabayon and perilla leaf (£7.50). The sharp and tangy crab cut through the sweet, silky avocado paste that happily washed over the tongue.

The house favourite is Nick’s meatballs (Nick is Rogan’s approved head chef) with hyssop, baked apricots in two halves and tzatziki (£6.50). A rich and robust little dish that keeps you guessing. You’ll love it.

My fabulously chic companion opted for fish; plaice served with thinly sliced chorizo, cumin potatoes and a clam chowder sauce (£16.50). Dinky comfort food that a modern day gourmet Barbie might rustle up to impress Ken. Or the other way around.

We fought fork and spoon for helpings of our enormous side order of cauliflower cheese (£4). So rich and creamy, clustered with bread crumbs. We couldn’t get enough.

The Cumbrian rib steak served with truffle pudding and purple potato latkes (£22.50) is a thing of rarefied and gloriously dark beauty. Supremely tender, you can slice through this cut of beef with any given knife. In fact, they don’t have a steak knife in the house, even if you wanted one.. The potato latkes adds a contrasting texture to each mouthful of steak, absorbing the juice like a hungry sponge, while the truffles offer a sweet onion finish. Glorious.

Dessert builds on an already impressive meal. My date enjoyed the caramelised white chocolate, milk mousse and espresso (£7.50) which she saw as a lighter way to enjoy a sweet – ‘like an angel’s cloud’ apparently – as the sweet frothy mousse gives way to an indulgent creme anglais.

I got stuck into the signature caramel tart with mascarpone ice cream (£7), desperately calculating if I had enough ice cream to accompany each fork full of tart.

Mr Cooper’s offers a mesmerising blend of skill and flair at a price point that makes it as much as a ‘drop in while you’re passing place’ as much as it does a ‘book in advance’.

So go, and discover one of the city’s most quietly impressive restaurants. Just try not to be late.