When this epic musical was first staged in 1989, images of the spectacle of the iconic helicopter landing on stage filled newspaper column inches. Like the crashing chandelier in Phantom of the Opera, it signalled the arrival of the blockbuster musical.

Tastes may have changed since then but, judging by the packed audience on the night I attended, the love for this spectacular show has not diminished.

This production by Laurence Connor is a revival of the 2014 production which came back to the West End to break box office records and led to an equally successful return to Broadway.

Set in Vietnam in the 1970’s, it follows the love story between Chris, a US army lieutenant, and Kim, a South Vietnamese girl. She is forced to work in a seedy bar in Saigon run by a notorious money-grabbing, Fagin-type dubbed The Engineer.

Based on Puccini’s opera Madame Butterfly, it explores love, loss and separation, as a raging war and the impending arrival of a communist regime creates chaos, poverty and confusion.

But it’s far from dated. The themes of war, lost children, and people fleeing conflict in search of a better life are still being played out daily on our TV screens.

What anchors the show, though, is the universality of the classic love story. Kim is enamoured with Chris as soon as she claps eyes on him. From that moment, she forgets the terrible life she is living and has one hope – that they can flee together.

Sooha Kim (Kim) starred in the show in the West End and Japan, and it shows. She conveys the naivety that comes with first love, and her wide-eyed wonder draws you in completely. So much so that you long for her dream to come true. Her vocals are as soothing as honey and she has genuine chemistry with Ashley Gilmour who plays Chris.

He gives a multi-layered turn as a man in several conflicts, including one with himself and what he thinks he stands for. When he sings Why God Why, he does not over sing it as I have seen done before. This gives it the quiet power and intensity that it deserves. You can hear every word.

One of the most memorable songs is the wistful Movie In My Mind sung by another ‘trapped’ character, the seemingly confident Gigi who struts across the set wearing suspenders, bobbed wig, and high heels.

But this facade is for her customers. She conjures up a movie in her mind of the dream she longs to find. Na-Young Jeon’s delivery is heartbreaking as you feel every inch of her pain.

The supporting characters add different elements to the musical. Zoe Doano’s Ellen is far more than a stereotype of ‘the other woman’. She fills in the three-year gap for Chris and presents Kim with a sad realisation.

Ryan O’Gorman’s John is stoic, his vocals study, solid and memorable. The show is never dull with him around.

Gerald Santos as Thuy, representing the old meets the new, has genuine stage presence and gives a performance which is far more than mere filler.

This poignant love story set against a backdrop of war and bloodshed needs some humour to ground it. This comes in the form of Red Concepción’s Engineer. 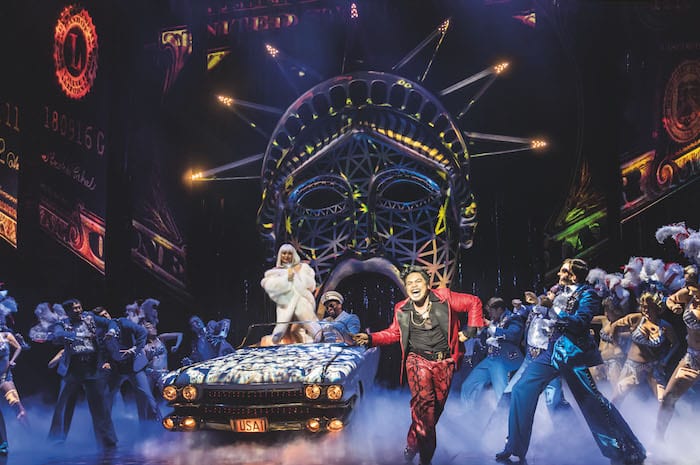 His American Dream is a tour de force. Even though it is a huge show stopping number, he has no one backing him until the end, and the range of emotions he covers and the versatility that he exudes is pretty damn special. It makes you want to jump to your feet.

The ensemble and swings deserve a special mention as this is no show without them. They each add something to the musical and provide it with the epic feel that it needs, particularly during the club scenes and the famous helicopter landing.

Totie Driver and Matt Kinley’s constantly changing set design is fantastic. With one mighty push from the stage hands, it represents the chaos of war beautifully.

Miss Saigon may be almost 30 years old but, like a fine wine, it gets better with age. This was my seventh visit. My eighth is next month.

It still soars, still has the power to move you beyond tears, and still breaks you in two. The entire cast deliver at every turn.

Manchester’s weather may be a mixed bag but the heat is definitely on in Saigon. This is the hottest ticket in town for the next two months and with good reason. It’s one of the best musicals you will ever see.

The Palace Theatre until 12 May.