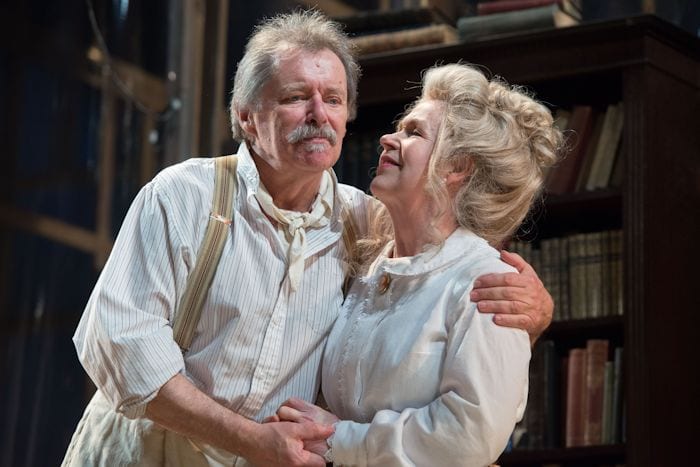 Eugene O’Neil’s Long Day’s Journey Into Night is a gift for any actor.

You can see why it has attracted many fine actors such as Jack Lemmon, Jessica Lange, David Suchet, Laurie Metcalfe, Jeremy Irons and Lesley Manville.

It has meaty dialogue and a family set-up that many of us will recognise, even though it was first published in 1956. It offers actors the chance to explore a complete range of emotions, as each character changes like the wind, as they flip flop, back and forth, each of them addicted to something.

James Tyrone (played brilliantly by George Costigan) is a stoic family man, berated by his sons berate him. But deep down they love him, and his wife Mary (Bríd Ní Neachtain) relies on him for everything.

In the course of one day, the family explore what they mean to each other, as the Connecticut summer house harbours secrets and lies, and the audience find out that there is something about Mary which troubles the family.

Pain is an essential part of this rich and gripping play. Each member of the family has a vice which numbs them, and they rely on alcohol, talking themselves up, or out of a situation, to get through each day.

And even though the action takes place in just 24 hours, you come to realise that this very day has been played out many times. The dialogue has a repetitious feel, whereby the characters go round in circles, just like a real family.

Bríd Ní Neachtain flits across the stage like a firefly, coming to life at night, and rattling around the house, whilst the rest of the family neck the watered-down whisky, in the hope she will go back to bed.

Edmund (Lorn MacDonald) is the youngest son who, in his mother’s eyes, is the sweetest.  She babies him but, like a child with mumps, he seems fearful of using his voice, so he plays a part for the family. Until he is pushed to go beyond the ‘sick son’ role he plays.

James Tyrone, JR (Sam Phillips) is described by his father as having a tongue like an adder. This is aided by alcohol, and the fact that he is constantly reminded what could be, as opposed to being happy, where he is now.

Both sons have come back home and are living off the bank of mom and dad. This feels incredibly relevant to a contemporary audience, given the huge number of young people in the UK desperate to get a foot on the property ladder.

Dominic Hill’s production of O’Neil’s leisurely play takes its time to take hold, but every scene is built on conflict. Unlike Edward Albee’s brilliantly biting Who’s Afraid of Virginia Wolf, however, these characters are not playing games. They want a way out, they long to help Mary find some inner peace, but their fears and frustrations make her worse. So she resorts to lying about her regular visits to the spare room.

Mary is an addict. This aspect of her personality is brilliantly portrayed by Neachtain as an illness, her hands constantly shaking, her words becoming slurred, her memories become fragmented and her conversations lacking a beginning, middle, and end. Neachtain is  unafraid to show that, at times, Mary frustrates the audience as much as her family.

Costigan is fantastic as James Tyrone, the head of the household. Once a well-respected actor, he is reduced to the role of nurturing husband/carer. His facial expressions convey  disappointment, love, obsession and shock at being lied to and, during one pivotal moment, disdain.

Lorn MacDonald and Sam Phillips are also wonderful as the two sons, living off their father, but criticising him as they go. Welcome light relief comes in the form of Cathleen (Dani Heron), the housekeeper who hears and sees everything.

Tom Piper’s set design gives the feel of a half-finished property wrapped in transparent plastic sheets, offering Mary no hiding place from the audience, as well as the members of her family.

Ben Ormerod’s lighting reminds you of a Tennessee Williams play, with the characters shielding themselves from the light, but here it’s because James wants to turn them off to save money.

Long Day’s Journey Into Night is one of those great plays that demands your full attention to truly work its magic. I would love it if young men smelling of beard oil came to see a classic like this, as it has so many layers and is incredibly relevant to today’s generation.

Gripping, relentless and at times, incredibly painful, this is a beautiful production of one of the greatest family dramas of all time. And it’s a must see.

Long Day’s Journey Into Night is at HOME until 26 May.