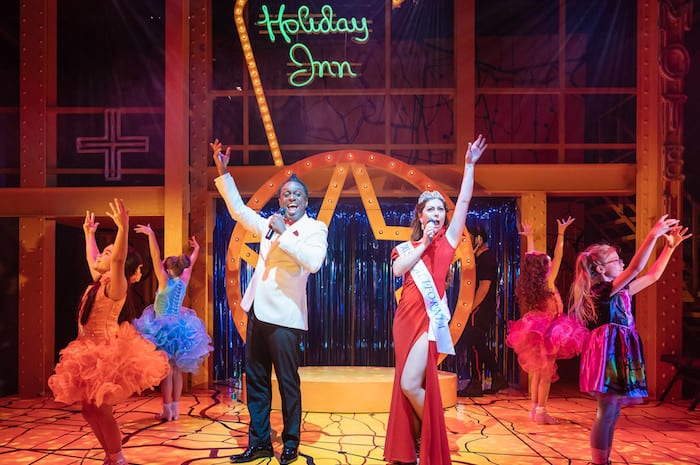 With hit Broadway musical Waitress currently giving audiences in London a big old slice of American pie, it’s no surprise that the latest indie film to get the stage musical treatment is Little Miss Sunshine.

These quirky tales often take a few more risks than a big blockbuster movie but often have brilliant characters so adapting them into musicals means there is so much to work with.

Little Miss Sunshine features a great motley crew of characters – the Hoover family who find themselves stuck in a camper van on a long journey so Olive, the youngest, can take part in a beauty pageant.

This 800 mile trip means the family face potholes in their lives as well as on the road – and it sure is bumpy.

Mom Sheryl (Lucy O’Byrne in fine voice) has to contend with her husband’s failing pyramid scheme, Grandpa’s lust for life and the fact that he never really wants to act his age, Uncle Frank’s recent attempted suicide, her son Dwayne who refuses to speak, and Olive’s dreams being crushed.

All of these ingredients made for a fine film which starred Toni Colette, Steve Carrell, Greg Kinnear and Alan Arkin was nominated for four Oscars. But does it work on stage as a musical?

Well, the performances here are very strong and the cast do their best to make the roles their own. Lucy O’Byrne does very well as the matriarch of the family but lacks a big song to fully showcase her wonderful voice. So she ends up becoming a fed-up character with no real back story.

Paul Keating’s Uncle Frank is as fully drawn as he was in the film, and his scenes with Sev Keoshgerian’s Dwayne are beautifully done. But Dwayne needs a voice through a song, because having a character choose not to speak in a musical means that there is scope to give him one big number so that we can hear his inner voice.

Mark Moraghan is playful and loving as Grandpa and his chemistry with granddaughter Olive (an effervescent Evie Gibson) gives the piece real heart.

The problem is William Finn’s songs are forgettable and some need the magic of a musical in terms of staging. You can sing in a camper van but you don’t have to stay there because musicals can transport you anywhere under the guise of a fantasy.

Director Mehmet Ergen has created a small chamber piece but the Hope Mill would be a much better fit as a venue.

Watching the actors move the yellow chairs which represent the van back and forth takes time and slows the narrative. Luckily, the van does break down so at times it works, but not always.

When you adapt a film into a musical, it either becomes slavish or pointless unless you bring something new to the stage. The performances here lift this show as the actors are committed and enable you to have a good night.

And Imelda Warren-Green has such great comic timing in two supporting roles that you long to see her take centre stage.

If you love this road movie, you will get to relive it and it sure beats sitting in watching Netflix again. But it still feels like a missed opportunity to make something far more memorable with a voice as a big as its heart, leaving you with something to shout about.

Little Miss Sunshine is at The Lowry until 1st June.