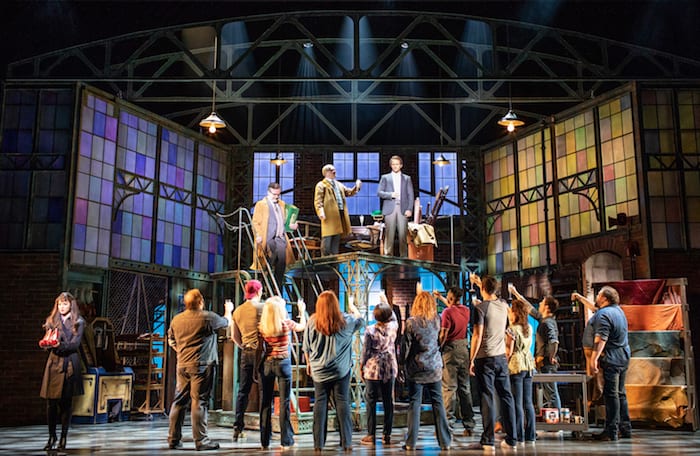 Kinky Boots is based on a little seen British film which has had a new life on the likes of Netflix.

The premise follows Charlie, a young man who has taken over his late father’s failing shoe factory, who meets a complete opposite – the magnificent Lola (Callum Francis), a drag queen who has been pushed to one side by her father.

This meeting of minds means that Charlie has the perfect solution for his financial woes – to manufacture boots for drag queens.

The show is set in Northampton and features salt of the earth characters, with London not really perceived as the land of milk of honey.

Cyndi Lauper is on songwriting duties, and she shows her true colours.

Not My Father’s Son is a stunning back story number, which superbly fills in the gaps and shows the audience that beneath the high heels and lip gloss, lies real heartache for lovely Lola, and it also shows the two leads that they have more in common than they once thought possible.

It doesn’t stop here though. What a Woman Wants busts a few stereotypes along the way and shows you that not one size fits all.

Callum Francis gives a performance filled with the wow factor, from the minute he steps on the stage, your head is turned and your heart swells. He explores Lola’s vulnerability with ease, and minutes later is strutting around the factory in high heeled boots with the grace of a new born gazelle.

Joel Harper-Jackson’s Charlie is an interesting character who is ruled by his overbearing girlfriend who makes all the decisions. Harper-Jackson explores the new-found freedom the character receives once he has befriended his long-legged pal.  His vocals are superb, as he conveys a quiet and still quality and then buy klonopin online without prescription hits the high notes when it really counts.

Former Coronation Street star Paula Lane (the late Kylie Platt) has a ball as the quirky and nervy Lauren who has her eye on Charlie. Her song, History of Wrong Guys, is ferociously funny and Lane clearly enjoys exploring her comic side and does so with real aplomb.

Helen Ternent does well in a thankless role, as Nicola, Charlie’s girlfriend, who is really a romcom plot device character whose sole purpose is to make you long for he and Lauren to get together.

Lola’s Angels, a group of sidekicks like a Greek chorus in wigs and lippy, perform the splits and rise to the challenge of Jerry Mitchell’s choreography with ease and dazzle every time they on stage.

A special mention must go to Lizzie Bea, who has vocals to die for. Even though her character Pat is often at the back of the stage, she is an excellent performer and you cannot take your eyes off her.

Harvey Fierstein’s book is a real crowd pleaser as it is all about accepting people for what they are.

Lauper’s superb songs back this, none more so than Everybody Say Yeah Yeah. Sure, at times you may feel they would suit an American story far more than this dusted off Brit flick turned musical. But it would be gritty and not as empowering.

Tim McQuillen-Wright’s set design is functional but has lost the depth of the West End and Broadway versions, but Jerry Mitchell’s direction is clever and you are never far away from a brilliant song.

Kinky Boots is a soulful and funny musical which has razzle dazzle, tear-jerking and comic moments. It proves that there’s no business like shoe business.

Kinky Boots is at the Opera House until 1st December.