Review: Joseph and the Amazing Technicolor Dreamcoat is too good to miss 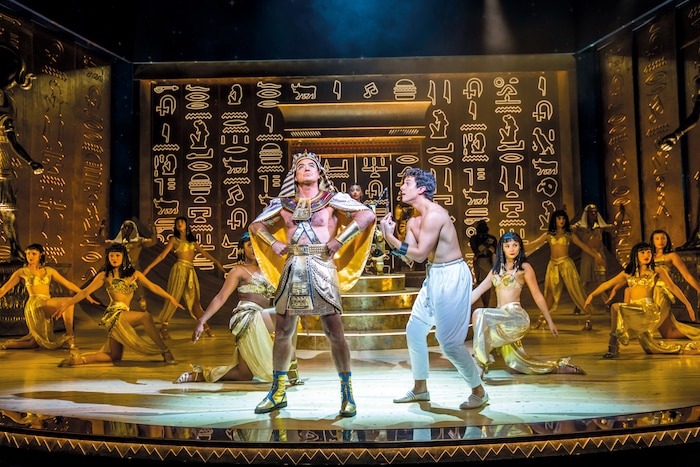 Be transported from Manchester’s Opera House to Egypt with the latest adaption of the fantastically colourful Joseph and the Amazing Technicolor Dreamcoat.

With lyrics by Tim Rice and Andrew Lloyd Webber’s music, a story based (loosely) on the book of Genesis has transformed over time to the amazing show we have today.

Joseph brings you into a rags to riches story that is encouraged by sibling rivalry, obscure dreams and a wonderfully flamboyant Pharaoh.

Jacob has twelve sons, but defies the definitive rule of parenting by declaring Joseph as his favourite. Jacob shows Joseph how much he means to him by presenting him with – you guessed it – an Amazing Technicolor Dreamcoat.

Now this coat is a thing of beauty. A work of art featuring nearly thirty different colours, it illuminates Joseph and his father’s preference for him, but the eleven other sons do not like living under Joseph’s shadow.

So, they take it upon themselves to turn off his light… But Joseph trusts in his talent of reading dreams, which ends up guiding him into the presence of the Pharaoh, where the direction of his life changes forever.

He has been in the role since it revised production in the London Palladium in 2019 and is currently touring with the company across the UK.

Alexandra Burke takes on the main – and incredibly full-on – role of Narrator, who within the role also plays Jacob and Potiphar’s wife amongst others.

She is hardly off the stage and is charismatic throughout each aspect of her performance.

Pharaoh is undertaken by the iconic Jason Donovan, who plays a significant part in this show’s history as he was Joseph in the show’s revival in 1991 and features on the official Joseph and the Amazing Technicolor Dreamcoat soundtrack from the London Palladium Cast Recording.

These brilliant talents intertwine beautifully on stage, the chemistry between them is palpable and genuine, contributing to the joy you feel when you are in their presence.

Joseph is a cantata musical, whereby the story is told entirely through song with very few words spoken in between.

There are, however, breaks within the lyrics to make room for fabulous instrumental fragments in which lively choreography takes place with the ensemble as well as the children of the cast and the three primary parts.

Particularly spectacular are the sandals that double as tap shoes when the eleven brothers dance with Burke in Act One.

Every single change of staging brings a new, eye-catching scene to your eye.

Magnificent sets are created from the most vivid yellow gold, which is representative of the Egyptian desert while the striking contrasts of the fluid, floating costumes of fuchsia, amber and royal blue material glide with the dancers that are donning them.

With the desert-like staging, the lighting charmingly imposes shadows, pink sunsets, stars, and a moon that glows with intensity.

Significant changes to the set are introduced when Pharaoh joins the party.

Golden sphinx-like statues stand on each side of the stage and the servants are dressed in metallic gold with harsh eyeliner. Everything is intensely gold and Egyptian.

That is, until Donovan breaks into the rock and roll Song of the King and Egypt turns into Las Vegas and Pharaoh turns into Elvis with the help of brilliant purple and magenta lights flashing across the stage.

The striking up of the music, whether you are familiar with it or not, will give you goosebumps, especially when the grand overture strikes up.

The orchestra is fantastic and is composed by musical director John Rigby. Rigby is clearly passionate about his role, and you can’t help but share in his joy when he begins the Entr’acte and turns to encourage the audience to clap along to the melodies.

And where would we be without the exceptionally breath-taking Technicolor Dreamcoat?

It is a wonder, your eyes are immediately drawn to the patchwork of rainbow fabric that construct it’s outer layer, and when Yarrow spins and swirls around the full lengths of the mesmerising outerwear, flashes of the golden lining not only ring true with the lyrics of Joseph’s Coat but captivate the audience.

Remarkably, it could be considered a character in its own standing, as it receives ooo’s and ahhh’s from the crowd whenever it appears on stage.

Joseph and the Amazing Technicolor Dreamcoat is an astonishing piece of theatre.

It successfully appeals to an audience that ranges from young children to seniors, and everyone in between. It sounds too good to be true, but it isn’t – it genuinely has something for everybody and anybody.

Children are a central part of the cast, and the fourth wall is broken, which completely draws you in and means the audience utterly engages with it.

The tongue-and-cheek looks and winks that are thrown into the audience create this unique dimension, and everyone feels included and involved.

This show is too good to miss.

It is the perfect way to kick off your Easter break. You’re guaranteed to leave with a grin that will be with you until the following morning.

Joseph and the Amazing Technicolor Dreamcoat is playing at Manchester’s Opera House until Saturday 2nd April 2022 before the rest of the UK tour. Tickets start at just £13.