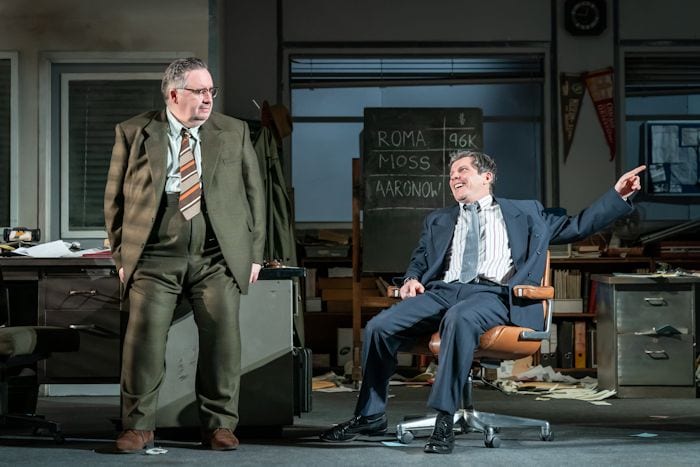 David Mamet’s fast talking and relentlessly ruthless characters have no choice but to make as many real estate sales as they can.  You can see the life being drained from them as they strive to stay on top. You can see why this play has been dubbed Death of a F*cking Salesman.

This fascinating group of men are all incredibly different, but the one thing that unites them is that when they are out seeking a sale, they become lone wolves.

When they meet a potential client, they try many different approaches before going in for the kill. Once it feels like the gullible customer is biting, the scene resembles a David Attenborough documentary as the king traps its prey.

Shelley “The Machine” Levine (played brilliantly by Mark Benton) is desperate to cling on to his failing reputation as a powerful salesman. He was one of the best and now blames his terrible leads for any failed deals. Watching this proud man trying to stay afloat is heartbreakingly real thanks to Benton’s layered performance, as he manages to capture not just his humour but his desperation. 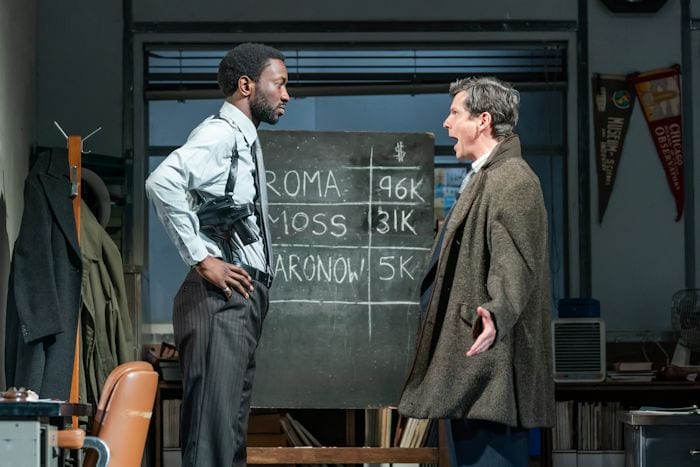 Meanwhile Dave Moss (Denis Conway) attempts to cook up a plan to steal the best leads, using his friend George (Wil Johnson) as his foil. Again, thanks to the great performances, this becomes truly gripping, even though you know this is headed for disaster. Each character reeks of despair and dejection.

Office manager John Williamson (played with a cold and indifferent edge by Scott Sparrow) tries to retain some order, but he can see this house of dodgy deals collapsing. Poor James Lingk (James Staddon) is a customer caught in the cross fire, as top dog Ricky Roma (Nigel Harman) attempts to snare him like a rabbit.

Sam Yates’ excellent production grips throughout. David Mamet’s dialogue is a gift for any actor. It is aggressive and fast, with words used as weapons as each character fights to keep their head above water.

Chiara Stephenson’s set design perfectly captures the cool and calculated sales in the first half, the smart Chinese restaurant contrasting with the messy ransacked office of act two which resembles these men’s lives as the ground beneath their feet slips away.

Nigel Harman is commanding as Roma, the foul mouthed, smooth talker. Mark Benton breaks you in two as a fallen man providing for his daughter, and Denis Conway’s Dave Moss, with his constantly red face and popping veins, highlights how close these men are to meeting their maker, due to the poisonous atmosphere and unachievable targets.

Wil Johnson’s George Aaronow bring welcome humour as Dave’s stooge. Each time Zephryn Taitte’s Detective Baylen barks one of the men’s names it is a reminder that time’s up.

Glengarry Glen Ross is a play that requires a sharp ear else you will miss some of the wonderful wordplay which is fired out of the characters’ mouths with the precision of a heat seeking missile.

But you will be rewarded with rich and nuanced performances and a timely play that reminds you that, beneath the bluster and the insults, these men are running scared.

Glengarry Glen Ross is at the Opera House until 30th March.