Review: Ghost – The Musical at the Palace Theatre Manchester 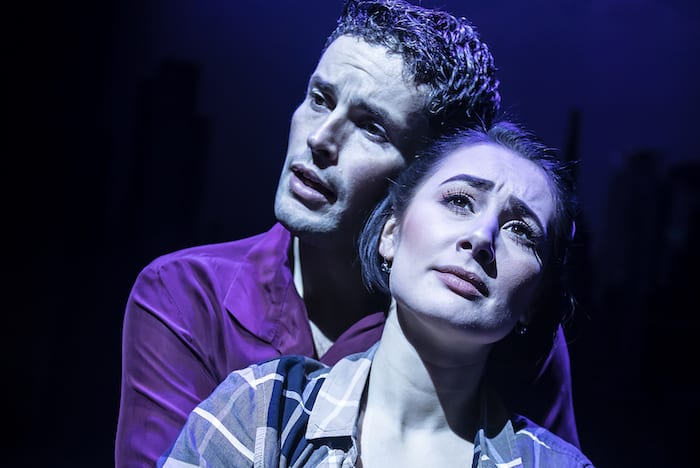 Ghost is up there with the likes of Dirty Dancing, Grease and Top Gun as iconic movies which continue to appeal to audiences decades after their initial release.

The storyline isn’t the most detailed or profound, but perhaps its appeal has always been in its simplicity and the universal themes of love, death and losing someone too soon.

It tells the tale of Sam and Molly, a couple in love and enjoying their new apartment in Brooklyn. When Sam’s murdered in a botched robbery on a walk home one night, his spirit remains in limbo, and as he comes to term with his new existence, it slowly dawns on him that his death wasn’t due to a random attack.

Realising Molly’s in great danger, he enlists the help of the medium Oda Mae Brown to warn her.

Ghost didn’t have the smoothest journey from script to screen, but the film grossed more than $500 million at the box office, made superstars of Patrick Swayze and Demi Moore, and earned Whoopi Goldberg an Oscar after its release in 1990.

Two decades later, it was reincarnated as a stage musical, which received its world premiere here in Manchester in 2011 with a book by original screenwriter Bruce Joel Rubin and songs by Eurythmics’ Dave Stewart and songwriter Glen Ballard.

Eight years on, following various tweaks in the ensuing years, it’s once again back in the city where it all began with an expanded production.

There’s no denying the vocal talents of this production’s two leads Rebekah Lowings and Niall Sheehy as Molly and Sam, but the opening scenes feel rushed and lack any real emotion or connection.

It doesn’t help that Sheehy often delivers his lines in a peppy tone, whether he’s depicting moments of comedy, romance, or deep sentiment.

One of the movie’s most memorable scenes is early on, before Sam’s death, when the pair takes to Molly’s potter’s wheel as the Righteous Brothers’ Unchained Melody plays in the background. In this telling of the story, the moment feels like a let-down because the pair plays for laughs rather than romance and as a result there’s zero sexual chemistry.

It transpires there’s a more heartfelt scene at the potter’s wheel later on in the musical, but while you understand the creative decision to hold back and try a new angle on such an iconic moment, it feels like a missed opportunity to truly encapsulate Molly and Sam’s love story earlier.

The star of the show is undeniably the charismatic Jacqui Dubois, who reprises the role of Oda Mae and receives a warm welcome from the moment she appears on stage to the rousing Are You A Believer? brilliantly supported by Jochebel Ohene MacCarthy and Sadie-Jean Shirley as Oda’s accomplices Louise and Clara.

Dubois’ comic timing is spot on and you can’t help but revel in her tour-du-force performance as the fraudster who reluctantly agrees to assist Sam. It’s little surprise it’s Dubois who receives the biggest whoops at the curtain call.

There are also strong performances from the supporting cast including Sergio Pasquariello as Sam’s friend and colleague Carl, Jules Brown as Sam’s killer Willie, and James Earl Adair and Lovonne Richards as the hospital and subway ghosts respectively.

The set design is effective, particularly the beautifully-lit New York City skyline, which serves as a permanent backdrop and there’s brilliant choreography throughout, not least the Matrix-like slow motion moves in the subway scenes.

Tricky set-pieces in which spirits leave their body are inspired, as are the moments certain ghosts are dragged off to what we can only imagine is a hellish abyss.

The songs come thick and fast from the outset starting with Here Right Now, while Lowings’ solo rendition of the melancholy With You is a stand out musical moment in act one.

The volume at time produces a wall of sound that’s enough to wake the dead, but all credit to Lowings, Sheehy and Pasquariello who deftly continued when a medical emergency briefly halted proceedings shortly before the interval.

Although the second half is markedly stronger than the first, there’s a great pace throughout the production and the evening’s over before you know it. It’s not faultless but it does make for a great night out, and the standing ovation was well-deserved.

If they could just revel in the romance in those early scenes, it could truly be a haunting take on an enduring ghost story.

Ghost The Musical is at the Palace Theatre until 20th April.