They say you get what you pay for. Not at Filthy Cow you don’t. 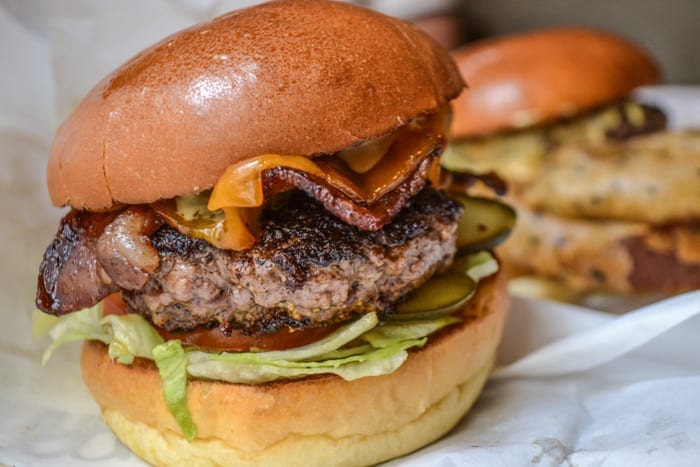 Last year everybody was going burger mad. The gourmet burger was the flavour of the month and new burger restaurants were opening left right and centre. So it might seem brave or foolish to open a burger joint in February. After all, there’s no shortage of places you can get a decent burger in Manchester, is there?

‘They say you get
what you pay for.
Not at Filthy Cow
you don’t.’

We’d heard good things about Filthy Cow since it opened in the former Lounge 10 unit about 3 months ago. They’ve been nominated for an award in the Cheap Eats category of the MFDF 2015 awards, so they must be good, mustn’t they?

This was our second attempt to dine there. We tried a couple of weeks ago. It took us about twenty minutes to find our way round the maze of fences surrounding the roadworks on Cross Street only to find that it closed on Mondays.

We made a second attempt on Friday afternoon. Time to find out what all the fuss is about.

It’s dark and industrial. Smallish downstairs but lots of room upstairs. Nice enough looking, but definitely not the most comfortable place we’ve dined.

The menu is pretty basic and the choice is limited. Five burgers (including one chicken and one veggy), three sides (fries, onion rings, slaw), three alcoholic drinks and three non-alcoholic. Ice cream for dessert (Ginger’s). No chance of being spoilt for choice here.

Don’t go to Filthy Cow if you’re looking for a six page menu of dishes to choose from.

Don’t go to Filthy Cow if you’re not a fan of burgers. It’s what they do.

Don’t go to Filthy Cow if you’re looking for chandeliers or a bloke in a tuxedo playing the piano.

Don’t go to Filthy Cow if you want waiter service. You have to order your own food. (We’re actually all in favour of this because there’s nothing more frustrating than waiting to be served in a restaurant, especially when your stomach thinks your throat’s cut).

Don’t go to Filthy Cow if you want little luxuries like cutlery or plates. There aren’t any. Just make sure your hands are clean.

But if you’re looking for a no-frills approach to gourmet burger dining, with no outrageous toppings and want what must be one of the most delicious (and almost certainly the juiciest) burgers to be found anywhere in Manchester (and possibly beyond) for up to 20% less than you would pay for one of inferior quality elsewhere, then Filthy Cow is for you.

Filthy Cow is all about the burgers. Nothing fancy. Just 70% brisket, 30% chuck steak, cooked pink and topped with filthy sauce, gherkin, tomato, lettuce. It works.

They’re likely to roll the brand out across the county – let’s hope they don’t lose their touch.

The future’s not bright. It’s filthy.