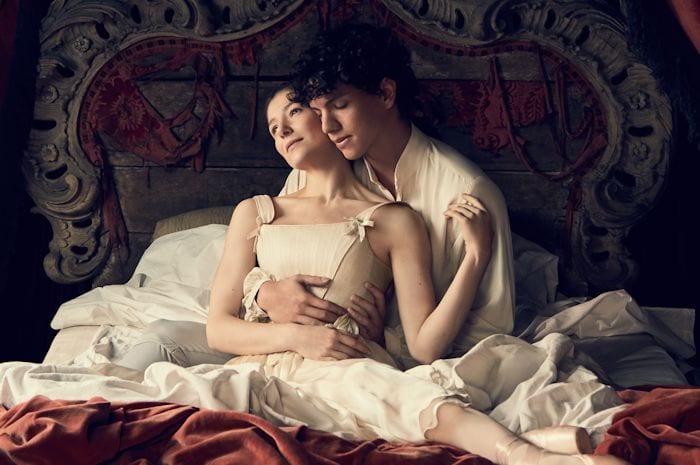 Manon is an epic tale which shares similarities with Les Misérables. It explores the choice between being rich or being rich in love. The title character is torn between two lives – one of opulence with a wealthy suitor or innocent love with a poor student.

The beauty of this production is evident from the minute it opens when we see a menagerie of colourful characters in 18th century Paris, from courtesans, harlots, and beggars to aristocrats.

Mia Stensgaard’s striking costumes separate the characters in our mind, but Manon finds it hard to choose between Monsieur GM and Des Grieux, which can only mean that heartache lays ahead.

Following a deal involving her brother and Monsieur GM, Manon finds herself betrothed to the rich but heartless man. She flees with her student lover to his apartment with her brother and her intended in hot pursuit.

Armed with diamonds and furs, they convince her to leave. This all sounds simplistic, but the joy in watching this stunning ballet is the high emotion which is on display during every moment. You see that Manon is torn and you feel for her, despite her fickle nature.

This is due to Alina Cojocarcu’s dazzling turn as the indecisive heroine. She moves like a gazelle and carries so much feeling with every turn that you are engaged with her plight.

Joseph Caley makes the perfect young lover, as he moves like a man with no worries and his whole life ahead of him, in complete contrast to James Streeter’s Monsieur GM, who has something of the night about him. But Streeter also captures his desperation. He wants Manon and he will buy her at any cost.

Kenneth MacMillan’s choreography is stunning, mixing classical with contemporary, and the action never flags, even with a long running time, because there is so much variety in the movement. He captures the contrast between those who have and those who have not, through every nuanced twist and turn of the dancers’ honed bodies and the effect is mesmerising.

Jules Massenet’s haunting music takes the audience on the journey with the characters, and it does so with without ever telling you how to feel. Your emotional response is natural and never forced. The pit is filled with talented musicians and you can hear every single note, transporting you with ease from the beauty of Paris to the Louisiana swampland.

This is a dark ballet with light touches and even though we are in the middle of a #MeToo movement, Manon still has a quiet intensity about it, even if the gender politics would not pass the Bechdel test.

A night out at the ballet offers audiences pure escapism, and English National Ballet’s Manon transports you to a world of beauty, grace, moving music and meticulous movement.

Manon is merveilleux. If you can get a ticket, go.