When I first came to Manchester in the 90s, the gay scene was thriving whichever way you swung. Three of my fondest memories crazily clubbing the night away are the Canal Street institution and daily staple Manto (the original one, not the hashed couple of relaunched attempts), the Hacienda’s monthly Wednesday night extravaganza Flesh, and dancing on that magnificent marble bar with a load of trannies at Athenaeum. All outrageously fantastic but sadly all long gone.

So it was with a little nostalgia in my heart that I sashayed over to Browns Brasserie & Bar, formerly my beloved Athenaeum, for lunch this week to give their newly launched menus a try. I say menus as we were handed four of them when we sat down at our table – bar menu, wine list, main menu, and tender beef menu (not to mention the after dinner menu later.) That’s a lot of paper, and at least two too many menus as far as I’m concerned. 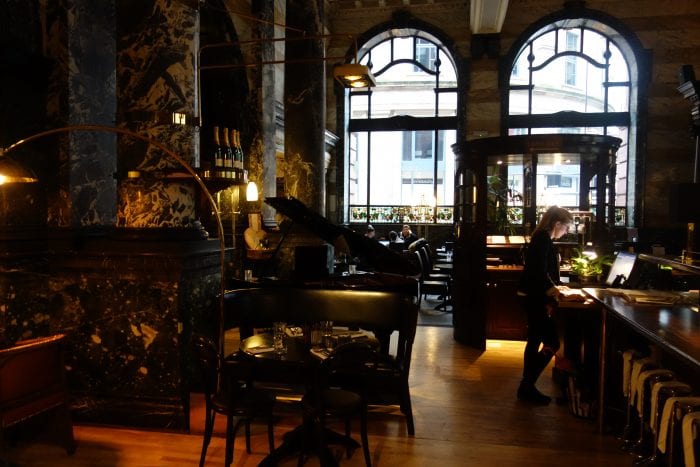 Putting that gripe to one side, the menus are well considered with the food leaning to a French brasserie style offer, with a really rather excellent wine list which only a building of this grand scale could comfortably house.

So what of the building? It’s still impressively opulent, if somewhat oppressive and dark, all that marble and mahogany unchanged since its early days as Parrs Bank designed by Charles Heathcote in 1902. I especially like the fact that it’s an easy building to get lost in and have a bit of privacy, with your own private space hidden behind vast columns characteristic of the Edwardian baroque architecture.

We chose the Jean-Marc Brocard Chablis from Burgundy, France (£29.50 bottle) as we wanted a big wine in this big space. It seemed apt. A well-rounded and greedy chardonnay, beautiful to drink and fantastic with food. A very good start.

Making use of all those menus, we chose the Slow Braised Beef Shin & Pan Seared Scallops (£9.50) from the tender beef menu. The beef was tender and the scallops excellently cooked, if on the small side for the price tag. Crispy shallots – posh onion rings in other words – were light and crisp and added texture, and the peas fresh and nicely green.

This could, and should, have been a brilliant starter, but the two elements didn’t work together as they were served with what tasted like Bisto gravy. It needed a decent sauce or jus.

For our second starter we chose Devon Crab on Toast (£8.50.) Toasted sourdough was unashamedly crunchy. We needed to use our fingers as the cutlery just couldn’t do the job. No problem with that. The problem was with the crab itself, all brown crab and mushy like baby food. The taste was there but the texture was off-putting. If they’d just thrown in some firmer white crab, it could have been so much better. I’m beginning to see a pattern here.

We wanted to try the lobster so chose the Lobster Risotto (£15.95) with parmesan, chive, courgette and lemon. It sounded simple but made well could have been excellent. It wasn’t. The lobster was chewy and overcooked, as was the overly creamy risotto. And although we could see fresh herbs in there, they tasted of nothing at all.

For our other main course, we asked for the Roasted Lamb Rump (£16.95) to come pink. It came overdone, saved only by the fact it was a great quality piece of meat. Crushed minted peas were lovely and fresh, nice and green again, with an OK potato gratin. The course was dry and needed much more of the red wine jus.

Could the desserts rescue the first two courses? Well they both looked good on the plate for a start, and I actually have to say that presentation was fantastic on every plate today, but one fared better than the other.

Caramelised Lemon Tart (£5.95) had all the right flavours but had some rather unusual and powdery setting agent in the curd which unfortunately ruined it for us. Luckily, Salted Caramel Profiteroles (£5.95) were naughty but nice – exactly as they should be. Washed down with a glass of lush and caramelly Hungarian Royal Tokaji dessert wine (£9.50 125ml), we at least finished on a good note.

What is so frustrating at Browns is that the ingredients are good and the menus have a lot on there you really want to eat. But it all falls down in the kitchen where the poorly executed dishes are just not good enough, especially at this price range. Staff are friendly and actually give a bit extra but this isn’t enough to salvage what was a very below average lunch.

I would happily come back and drink cocktails and wine at Browns all afternoon. Maybe I’ll jump back on the bar later in the evening for old times sake. But I won’t be needing the other four menus.