Review: Brief Encounter at Bolton Octagon is “intimate and wonderful” 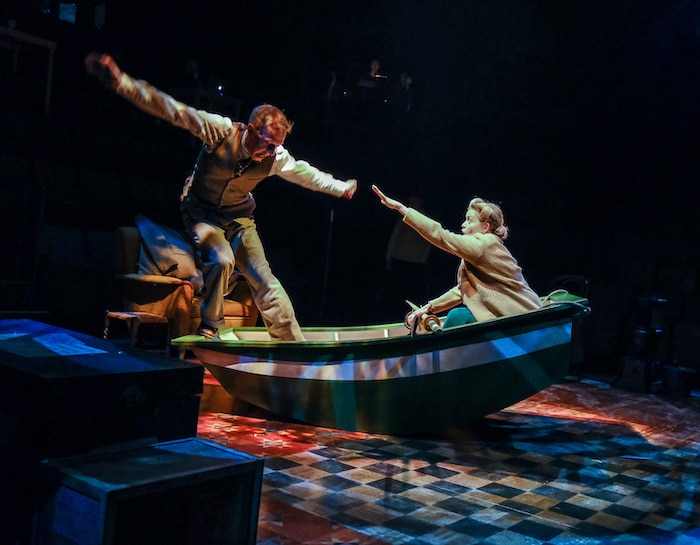 Stephen Joseph Theatre, Theatre by the Lake, and Octagon Theatre Bolton in partnership present this production of Brief Encounter, and it is being performed in the Bolton Octagon until Saturday 5th November 2022.

If you are yet to visit the Bolton Octagon, the charming Brief Encounter is definitely the show to trial it out with. Its intimate, eight-sided stage is very much like being in the round, and there is not a bad seat in the house.

The remarkable thing about this theatre is that your perspective on the story and character will alter depending on your seat, potentially seeing more of one character than another, or you may have a clearer view of some of the background action.

Although do be cautious, as sitting on the first row may mean you become a part of the play!

The stage floor may seem a bit small compared to conventional theatres, however lighting designer Sally Ferguson employs clever use of lighting, projection, and set to allow for the creative team to expand or close off the space as necessary.

Brief Encounter is an immersive play from the start, with train guardsmen vaguely helping to direct audience members to their seats, while having light conversation with anyone friendly. Eyes are drawn to the stage where Beryl (Lara Lewis), and Mrs. Bagot (Natasha Lewis) are whirling and twirling along to the live music being played on stage by Alex Weatherhill on piano and Maximillian Lamprecht on double bass. Once the lights dim and the play begins, Laura (Anne-Marie Piazza) and Alec (Pete Ashmore) cross paths by chance within a railway café. Though both married to other people, they strike up what is at first a platonic connection. This friendship is the start of the infamous slow burn forbidden romance. Act two heats up, picking up immediately where act one ends, this time with use of tango-like music, red lighting, and rose petals falling from the ceiling.

The small-scale cast of seven all equally shine bright as character actors. Anne-Marie Piazza takes the lead as Laura, opposite lead Pete Ashmore as Alec. It is their story that we follow, but we are also drawn to the lives of the characters that surround them. Natasha Lewis, Lara Lewis, Robert Jackson, Rishi Manuel, and Joey Hickman each take on multiple roles throughout the production with very quick changes between each character and discipline indeed. These roles include singing, dancing, and instrument playing on top of acting. Not to mention the musicians who are present on stage nearly all of the time, stationed at their respective instruments. They are a genuinely talented bunch. There are musical numbers dispersed throughout, such as No Good at Love, Mad About the Boy, and Romantic Fool, and while these are placed effectively – either to emphasise comedy or tension, Brief Encounter would probably be more considered a play with songs, rather than a musical.

One of the most compelling reasons to see Brief Encounter at the Bolton Octagon is how the production makes use of the connecting staircases, walkways, and stage hallway exits. While the set is simple and functional (featuring a counter, a coal burner, two sets of table and chairs, an armchair), the performance is lifted off stage and reaches a new height when characters are spread across the auditorium, intermingled with the audience. At points, there are actions of slow-motion movement when Laura and Alec are in close proximity, and these are washed over with sounds of ocean waves, of which run as a motif through Laura’s narration, and it all comes into play when projections of what seem to be sea waves cover the floor. Notable features of the stage floor include a small, circular, rotating centre, and two stripes of light which are used to indicate the inside of a train carriage.

This relatively modernised production is wonderful evening or afternoon entertainment, whether you are previously familiar with the story or not. The performances are well-rounded and pleasing, and the use of instruments is greatly diverse – featuring a saxophone and trombone battle that is not to be missed!

Brief Encounter is playing at Bolton’s Octagon Theatre most evenings until Saturday 5th November 2022, with some matinee performances taking place on Tuesdays, Thursdays, and Saturdays. Tickets start from just £15 and can be purchased here. Accessible performances are taking place in the evenings of the dates as follows: captioned – 25/10/22; BSL – 01/11/22; and audio described – 02/11/22.