Review: The Book of Mormon is foul-mouthed, fast-paced – and funny as hell

Shiny, sequinned and searingly satirical, this is a musical which isn't afraid to break the mould 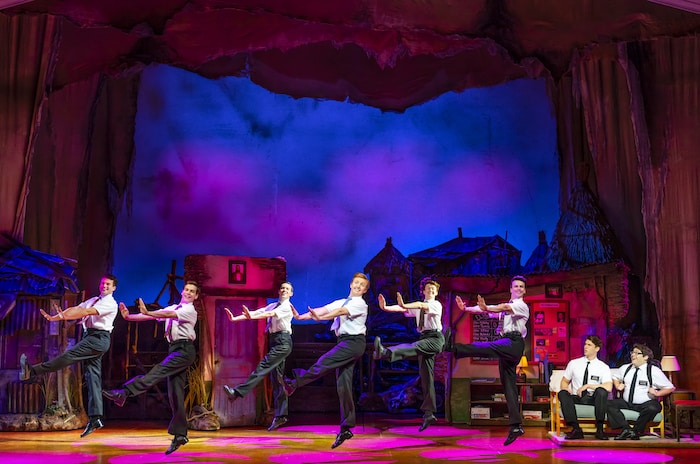 It’s been called the funniest musical of all time – and now the nine-time Tony Award and four-time Olivier Award-winning Best Musical, The Book of Mormon, has returned to the Palace Theatre.

This outrageous musical comedy is from the creators of South Park, Trey Parker and Matt Stone, and Bobby Lopez, the co-writer of Avenue Q – which gives you an idea why there’s an age limit for this production.

Indeed, the musical pushes the boundaries of good taste to the limit – but it’s laugh out loud funny, too, tackling issues which many comedy writers would shy away from.

For those unfamiliar with it, The Book of Mormon follows the story of two young mismatched missionaries sent to preach their ideology globally.

While their peers learn of the locations they’ll be packed off to – France, Norway, Japan – Elder Price (Robert Colvin) and nerdy Elder Cunningham (Conner Peirson) are sent on a mission to a place that’s about as far from Salt Lake City as you can get.

In a remote Ugandan village, the two are greeted by villagers devastated by the AIDS virus, drought and maggot infested scrotums to name just a few.

They join in with the local song denouncing worries, ‘hasa diga eebowai’ – an outrageous parody of the Lion King’s ‘Hakuna Matata’ – though the translation is considerably more offensive than “no worries.”

Shocking jokes about raping babies, having sex with frogs and genital mutilation land thick and fast with an open-mouthed but constantly sniggering audience, via some insanely catchy songs.

In fact, while the lyrics may be satirical and foul-mouthed, the song and dance numbers are really a celebration of Broadway musicals, with big tap-dancing numbers and show-stopping routines perfectly using the full ensemble.

It’s clever and close to the knuckle, too. A dream of Mormon hell features Hitler and Genghis Khan, but also Robert Kardashian, OJ Simpson’s lawyer.

Aviva Tulley gives a starry performance as the young Nabulungi – though, cringingly, none of the Americans can manage her name; she’s called Neutrogena at one stage, then Nutella, then Nala.

The Book of Mormon isn’t afraid to play with the sometimes rather strange facts of its founding story; the angel Moroni tells Joseph Smith to keep the unearthed golden scripture hidden: “Even if people ask you to show the plates, don’t… even though this might make them question if the plates are real or not. This is sort of what God is going for.”

But there are unexpectedly poignant moments, too. At its heart, this is also a story of hope and humanity.

The cast put on flawless performances, and at our showing are rightly given a standing ovation at the end of what is a non-stop riot for its full 2 hours and 20 minutes.

Shiny, sequinned and searingly satirical, this is a musical which isn’t afraid to break the mould.

The Book of Mormon is at the Palace Theatre until Saturday 1st January 2022. Tickets are available here.