Review: Blood Harmony is a delightful play about growing up and learning from siblings 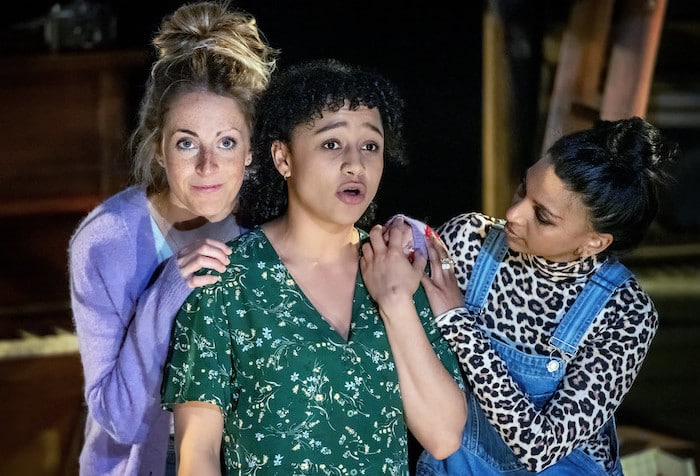 The play Blood Harmony starts with three sisters singing around the small yet intimate stage at The Lowry.

They are the only people who are physically on the stage, so they are the ones moving certain props on and off stage.

The play is written by Matthew Bulgo and is written with so much realism.

It doesn’t sound or feel scripted, it sounds like a real conversation you would have with your siblings.

The actors deliver their lines with rawness and realness that you can only get in the theatre.

Each one of the actors brings a directness to the different dynamics of sisterhood.

Keshini Misha (Maia) is the middle daughter who feels that they mess everything up and they can’t do anything right.

But in the end, it takes her sister to tell her that she isn’t for her to finally believe it.

She’s also the comedic element, with her quippy one liners and her direct and truthful statements.

Phillippa Hogg (Anna) is the eldest who hasn’t returned home due to fear.

Throughout the play, she learns of the hardships her sisters have had to go through while she was away – and only when Eve de Leon Allen (Chloe) ends up breaking, does Anna see the real truth.

She’s the big sister who means well and is only hard on her younger siblings because she knows what they’re capable of.

Eve de Leon Allen (The House with Chicken Legs) is the youngest daughter, Chloe, the one who really sets the play in motion and the one I related to the most.

At the climax of the play, Chloe reaches breaking point. She’s held in her emotions and her thoughts for so long that once her sisters start arguing, she breaks.

And that’s my favourite part in the play. Allen knows what they’re doing, and at that moment they bring their emotions to the forefront for everyone to see.

The set is a simple old, rustic attic with stacks of old things and a wooden piano which plays a heavy part in the play.

The set is designed by Hayley Grindle, and hats off to her for making the room feel like a home.

If you butt heads with your siblings but you love them dearly and would never tell them, take them to watch Blood Harmony and let the play do all the talking.

Blood Harmony is at The Lowry until Saturday 18th June. Tickets are available here.