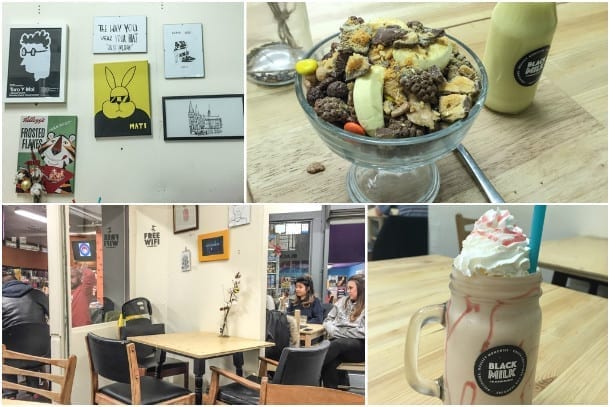 Although most people would associate cereal with breakfast, a bowl heaving with chocolate, sauce and sweets isn’t exactly first thing in the morning material. And so it was that Polly Newby enjoyed a three course lunch at Black Milk Cereal Dive…

Black Milk Cereal has been somewhere I’ve been meaning to try out since it opened early last year. As the name suggests, it specialises in cereal and making it seriously lavish. They won’t be serving you a full English anytime soon.

It’s tucked away in a corner of the second floor of Affleck’s, but with its bright lights, enticing shelves of edible goodies and thumping soundtrack, it’s hard to miss. Compact and cosy, Black Milk is furnished with mismatched furniture and cool quirky artwork – very trendy. My boyfriend and I made ourselves comfortable, and soon after a smiley waiter bounded over to explain the busy menu.

First, you pick your bowl – an edible chocolate bowl, sundae bowl, or superbowl. Next you agonise over the variety of cereal ‘cocktails’ with witty names such as Crumble Stiltskin and Usain Bowl, and including anything from the quintessentially American such as Reese’s Puffs to the tamer and more familiar Weetabix.

I went for Cameron’s Mess in a sundae bowl, a cocktail of Colossal Crunch, Golden Nuggets, Golden Grahams, strawberries, meringue, cream, sprinkles, strawberry milk and strawberry sauce. Wow. You have the option to ‘pimp’ your cereal, going for three mini ‘slider’ bowls so you can try as much as possible, swopping cereal for topped porridge, or even creating your own bespoke concoction. But as it was my first time in this alien territory, I played it safe. 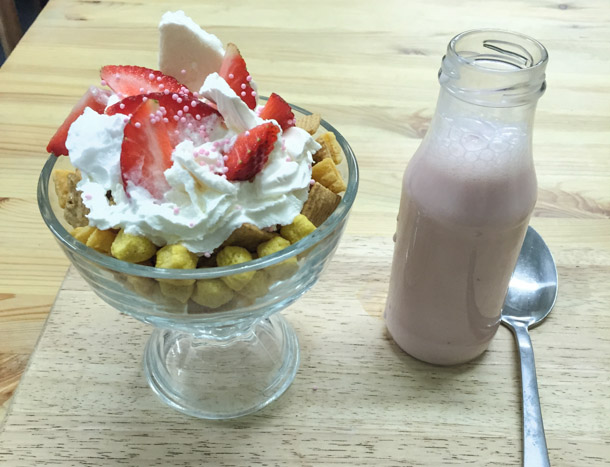 Black Milk also offers luxurious milkshakes such as the Triple Salted Cheesecake Stack, a shake with a generous wedge of cheesecake balanced on top. It’s pretty pricey at £7, but also very impressive! Again, I found myself playing it safe, slightly intimidated by the blowtorching of marshmallows going on in the kitchen. We opted for The Pile On, with strawberry, caramelised white chocolate and strawberry milk, and Reese’s Monkey Split with banana, caramel, Reese’s Pieces and banana milk. Finally, to wrap up our sugar loaded order, we added some plain toast-a little savoury something to somewhat neutralise our palettes.

Whilst we waited for the cereal wizards to work their magic, Black Milk’s music choice of tracks with dominant, thumping beats began to grate slightly, and watching the party opposite us receive their giant milkshakes adorned with toasted marshmallows and chocolate bowls full to the brim with goodies made the wait feel even longer. The decadence of Black Milk cereal feels so excessive, American-esque and almost exotic, that I couldn’t wait to get my hands on my own treats. 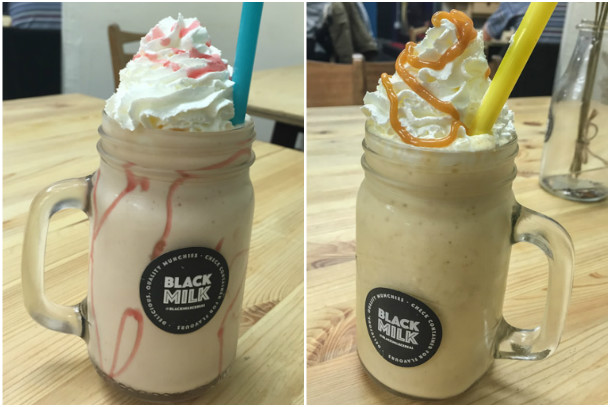 The milkshakes arrived first, served in trendy mason jars. They were divine. Thick and creamy, with chunks of chocolate and caramel, they are substantial and feel like a meal themselves. We shared them, as both the strawberry and banana concoctions were delicious, and neither were synthetic, which can be the case for such sweet and fun flavours.

The main event arrived soon after – glass sundae bowls overflowing with cereal and toppings, served on wooden boards with an adorable milk bottle on the side. I dived straight in and started on the mountain of soft meringue and whipped cream, and then I got to the cereal itself. Golden and fresh, this was a far cry from my usual Fruit ‘n Fibre.

My boyfriend’s A Banana Ate My Lion cocktail was even sweeter, with heaps of candy, chocolate and scoop of salted caramel sauce. His savoury tooth struggled to process it, but if I’d had a few less ounces of self-control, I could have finished it for him.

After I’d polished off my own cocktail, the waiter admitted that they’d forgotten our toast, and asked if it was still wanted, probably expecting me to say no, as he’d just witnessed me consume a mammoth amount. But, I confess, I was ready for a break from all that sweetness and needed some savoury back in my life. Although not Black Milk’s speciality, the toast was great! Lovely, hearty wholemeal bread and real butter. I enjoyed a couple of slices and had my sweet-savoury balance somewhat restored.

Our indulgent lunch came to just over £20. Quite steep for cereal and milkshakes, but the team at Black Milk go the extra mile to make everything as decadent as possible.

My three course meal at Black Milk Cereal was a fun experience, and the café has made its way onto my Saturday treat location list.

If you need an excuse to go, check out their January offer: buy one get one for £1 on all food and drink. Sign up at: www.blackmilkcereal.com/offers

There’s talk of Black Milk Cereal Café moving to a new unit on Oldham Street in the Northern Quarter. We’ll let you know.