Review: Babe the Sheep-Pig at The Lowry Theatre 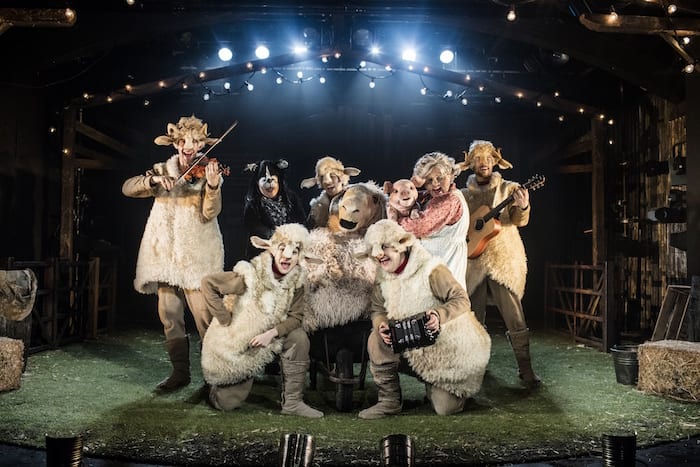 Last night saw the premiere of Babe the Sheep-Pig at The Lowry Theatre. Adapted by David Wood from the 1995 Oscar-winning movie based on Dick King-Smith’s book, this touring musical production has a lot to live up to.

We are greeted with a large barn and half the cast of eight who play both sheep and other smaller characters in the production. They work the audience and kick off with a song, introducing the characters and the story of Babe, the pig that dared to think outside the box. A good move for those not familiar with the story and younger members of the audience.

Farmer Hogget wins the pig in a weight-guessing competition, bringing it home for his wife to fatten up for Christmas dinner. Taken in by trusty sheepdog Fly, the mother figure in the farm, Babe develops a natural talent for sheep herding with his friendly innocent manner winning over the flock. He also wins over the farmer and his wife, going from future feast to favourite pet in a short space of time.

The puppets are the absolute stars of the show from the start. Ingeniously designed by Max Humphries and Dik Downey, with the help of puppetry director Matthew Forbes they bring to life the animals on the farm through their wonderful attention to detail, especially in the way they move.

What’s also amazing is how the cast working the puppets blend in and almost become invisible. Babe is loveable, the puppies mischievous, the geese gaggling, head ewe Ma wise and cuddly, and a superb menacing wolf ominously constructed around one of the cast down on all-fours.

Madeleine Girling’s set is simple but very clever. Getting a whole farmyard and farmhouse on to the stage must have been no easy feat, as this is no big budget, special effects production, yet the scenes change fluidly and playfully.

Props are used to great effect. Hay bales become a sofa then a dining table with multiple fence changes bringing movement and creating new perspectives and different views of the same yard.

Ben Ingles is brilliant as Farmer Hogget, a man of few words. His favourite word, “Ay”, expresses countless meanings. Emma Barclay’s Mrs Hogget is the polar opposite, a delightfully chatty country bumpkin adding bags of humour. Their half-masks, quite dark despite their personas, add depth and age to their characters.

Narration is by the assured Fly, played masterfully by Nicola Blackman, a touch of vulnerability coming through as she loses her puppies and learns a thing a two from Babe.

Thomas Gilbey may not have quite as cute a voice as Christine Cavanaugh in the film, but he does manage to make the pig just as loveable and curious. The show dances on with some catchy tunes, courtesy of Barnaby Race’s soundtrack, introducing the uplifting story to an audience packed with children and adults like me who loved the film.

There were a couple of sound glitches but this was the first night and nothing that can’t be sorted by the next performance.

It’s a really magical and fitting production that manages to get across the heart of the admirably moral tale in the process. Defy the odds and reach for your dreams. Anything is possible. It surpassed my expectations, despite the odds.