Review: Annie at the Opera House 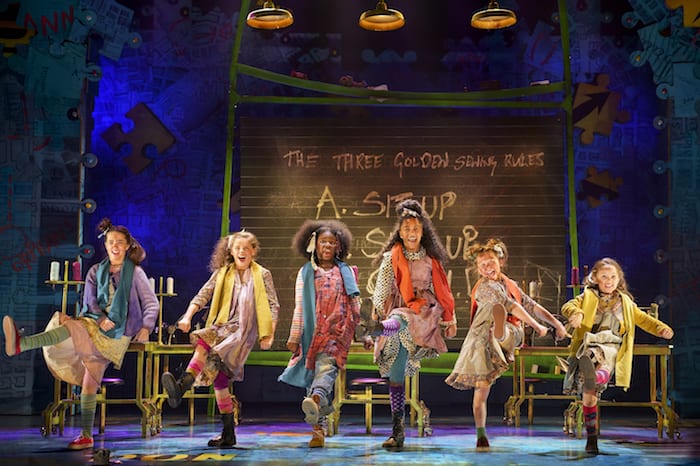 Annie, the hit Broadway musical about the little red-haired orphan who wins the hearts of all she meets was first staged in 1977. I’ve seen it many times and I have always found it fun but a bit twee and sugary.

Some changes have been made to this production which began life at the West Yorkshire Playhouse – and they work. The show has a contemporary feel to it and no longer feels like eating candy floss for two hours. And this is a good thing.

Annie (the brilliant Taziva-Faye Katsande) is a feisty young girl who is stunted by the cruel Miss Hannigan (Anita Dobson, having a ball) who runs the orphanage where she lives. They clean the establishment most days and for this hard knock life all they receive is cold mush for breakfast and no love. They are forced to chant “We love you Miss Hannigan” but the only thing she loves is her booze.

The only bright spot for orphan Annie comes in the form of a stray dog called Sandy (played with a real sense of ‘I will go where I want to’ by Amber, a lovable Labradoodle) who wins her heart and that of the audience.

So far, so twee. But there is something special going on here because Annie and the orphans have been given fresh new life by Nick Winston’s stunning choreography. There is something ‘stomp like’ about these moves, and they give the show a real sense of modernity.

Katsande’s Annie is full of life and is sweet and grateful to anyone who shows her respect. You really sense that she has been mistreated. This is not always evident in this family show, so kudos to director Nikolai Foster as he does not shy away from the reality.

Anita Dobson flails about with real aplomb and reveals the heartache behind her character’s plight as well as playing it for laughs. Alex Bourne oozes warmth as Daddy Warbucks, as does Carolyn Maitland as his secretary, Grace. Richard Meek and Jenny Gayner are both fantastically funny and deliberately devious as Rooster and Lily who pose as Annie’s parents so they can get their mits on Daddy’s bucks.

The orphans have enough energy to light up Manchester’s night sky and have fantastic stage presence considering how young they are. And Kacey Agwuegbo and Orla McDonagh make stunning stage debuts as Duffy and Molly.

The supporting cast dance their way across the stage bringing Easy Street to Quay Street. Every one of them has a joyfulness which suits this show perfectly.

This production of Annie has something for everyone. From the songs you know and love like Tomorrow and You’re Never Fully Dressed Without a Smile through to Colin Richmond’s jigsaw style set design which cleverly focuses on putting the pieces together, so that Annie can make sense of the world.

Street wise, slick and with a cast that can only be described as superb, Annie will put a big smile on your face. I bet your bottom dollar.

Annie is at the Opera House until 16th February.