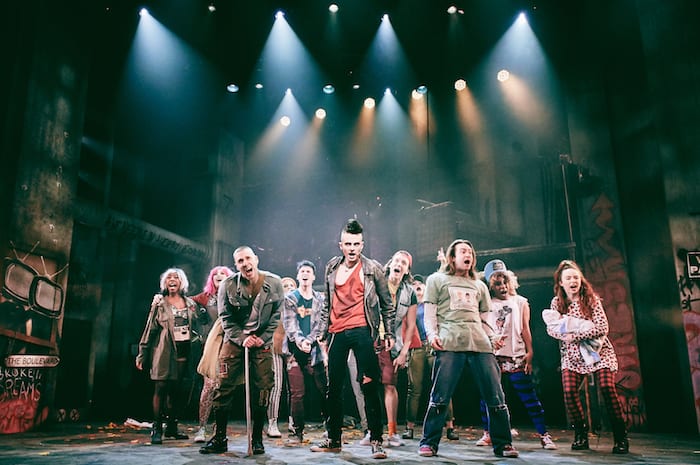 Green Day’s American Idiot is an amazing concept album so it’s no real surprise that a stage show has evolved from it and that it’s been a huge success since it debuted at Berkeley Rep Theatre in 2009.

So has it all gone a bit jazz hands since it started filling theatres? The answer is no. The album that fans love and the image of the band themselves remains intact.

With a book by lead singer Billie Joe Armstrong and theatre director Michael Mayer, the feel of this show is very much like attending a gig or a rock opera. In other words, if you liked The Who’s Tommy, you’ll love this.

American Idiot takes swipes at the American media and the conflicting images we all saw post 9/11. Stereotypes were formed which resembled characters from Star Wars. We saw George Bush represented as the saviour and the enemy was all around us. This is where the clever lyrics of Billie Joe Armstrong kick in like an adrenalin rush. “Information age of hysteria/Calling out to Idiot America.”

Instead of representing the United States as the place where dreams are formed, this is as far from American Idol as you could get. The show speaks of frustration and pours scorn on the propaganda that we all witnessed whilst still in shock at the scale of 9/11.

Here we follow three friends and the journeys that they take. These are rebels with a cause. They want people to listen to them. Their story is told mainly through the songs of Green Day but this is not really a jukebox musical. Why? Because all the songs on this highly acclaimed album are linked together anyway so there is no shoe-horning required here.

The band are visible to the audience and are the backbone of this piece. Robert Wicks, Chris George, Nick Kent and Charlie Maguire are all marvellous musicians and provide the show with a heartbeat.

Tom Milner, who leads the cast as Johnny, is really striking. He captures the sensibilities of a rebel who is desperate for change and his character is intelligent enough to know that he is being played. But he is also quite childlike and needs direction.

Luke Friend plays St Jimmy, Johnny’s flip side. Think of the Bad Idea Bears in Avenue Q and you’re halfway there. Or Jiminy Cricket on drugs and with a bad attitude. Friend has a field day with this character, as it as far away from his time on X Factor as he could get. He has excellent stage presence, raspy vocals and has a ball in his Adam Ant get-up.

Samuel Pope and Joshua Tunny also have a blast as pals Will and Tunny. The vocal ability on stage is quite incredible as the entire cast are so in synch with each other that they barely come up for air. Watching them take in the applause at the end is genuinely moving as they clearly immerse themselves in these riotous rock songs.

Cynics may claim that there is not much to the show and they are right. But when you have an album as fine as this one, sung and delivered by such terrific talent, who needs anything else? Fans will go home feeling like they have been to a great gig, with all the emotion that comes with that.

There is the odd sticking point. One that stuck with me is that you feel exhilaration and solidarity but the show gallops through the songs with such speed that beneath the slick delivery there is no time to pause, reflect or feel moved by any of the proceedings.

But when you have Sam Lavery belting out these iconic hits, in the underwritten role of Whatsername, she does bring a certain amount of emotion to the stage, as do the entire cast.

If you prefer your musicals to be like your Friday night drinks, fast and free flowing with no pause button, then American Idiot will be right up your Boulevard of Broken Dreams.

American Idiot is at The Palace Theatre until 6th April.