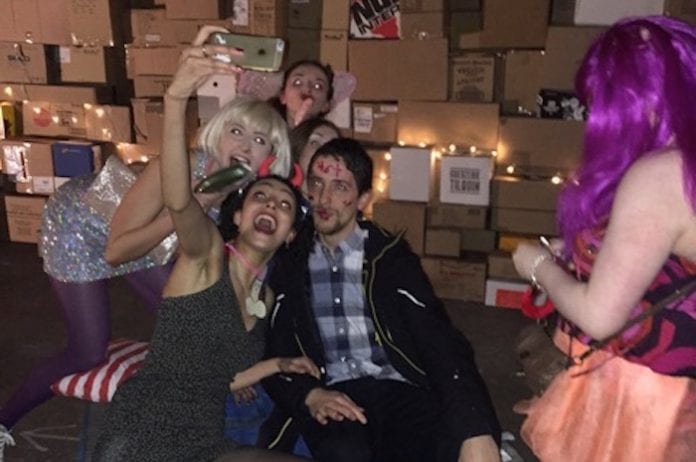 The Northern Quarter is the home of the alternative lifestyle in Manchester. With its vintage shops, funky bars and hip cafes, it’s hard not to feel the hipster vibes. But the bohemian style seems to be slowly spilling out into the rest of the city. The new theatre inside the Great Northern has a feel to it that wouldn’t go amiss on the streets of the Northern Quarter.

With the atmosphere of an underground bar in San Francisco, the space itself is truly awesome. The main feature wall is brick layered, while fairy lights are strewn all around to create a welcoming ambience. The bars, and some of the seats, are made from crates, and an entire wall comprised of cardboard boxes separates the foyer/bar area and the theatre space. These are just a few of the things that make this place the epitome of alternative theatre.

This production of A Midsummer Night’s Dream is perfect for those who love things outside of the mainstream. It’s incredibly eccentric – a theatre experience like no other.

As you first step into the performance space, you immediately realise that there are no seats for the audience. If you haven’t realised how quirky this particular venue is, you will at this point. The crowd simply gathers and waits to see where the actors will go, often following them around the space and sometimes circling them.

This version of A Midsummer Night’s Dream is set in a modern day nightclub, where the fairy magic seems to be some kind of drug. There’s sexy dresses, a giant inflatable penis and glitter aplenty. In fact the play begins with Titania swearing loudly from offstage, while the audience glance around awkwardly trying to work out if this is actually part of the performance. It is.

This works well. But with the characters walking in and out of the crowd and moving around the space at a quick pace, it did get a little too chaotic in parts. I know that had I not already known the story, I would have been confused at times.

If you don’t like panto – or anything with audience participation – this may not be the play for you. There is a great deal of audience interaction when the audience is encouraged to join in and dance. So it’s a good job there’s a reasonably priced bar at hand to give you the liquid courage to strut your stuff.

The cast’s stamina to dance consistently (even when there was no music) is very impressive and they’re certainly a ballsy bunch to be able to encourage an awkward audience to shake their hips.

The two stand-out performances for me were Nicole Evans who played Titania and Jessica Noonan (Helena). Both captured my attention completely, even in the chaos of the street-theatre style performance and had great vocal reach and wonderful facial expressions.

Although not usually the kind of performance I would choose, it was fun and unique and I feel certain that nobody could ever call it boring. It’s the perfect evening for anyone looking for a good laugh, to have a drink and be entertained before going out and to get into a stupidly happy mood.

If you love vinyl, ironic T-Shirts, sea salted caramel ice-cream and beanie hats (not necessarily in that order), this theatre will be a dream come true.

If you just want a night of light-hearted fun and silliness, you’ll find that this show is the perfect ingredient.

And even if you feel like you just might not appreciate its style, I’d recommend going anyway. After all, who doesn’t want to feel like they’re in an underground, hipster-style bar in San Francisco?