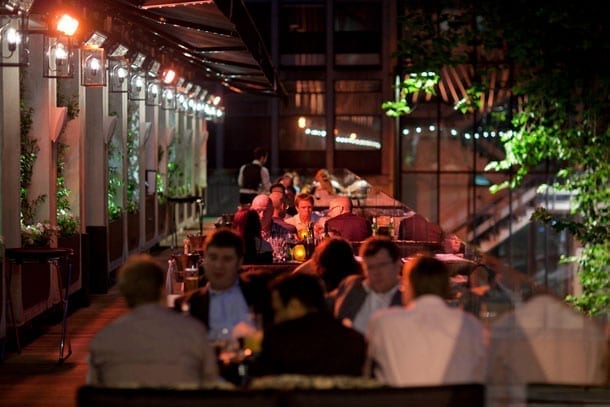 I’ve always enjoyed the food at Restaurant Bar and Grill but have often found the room a little too stuffy and formal. Not anymore as they have launched a new terrace that stretches the length of the restaurant.

It seems a bit weird to open this in winter but it works. The booths are cosy and the heat lamps blast you with a warm glow that also makes everything look red and there’s also blankets on hand if you want to snuggle.

There’s a bar at one end, so you can go for drinks or to dine. Weirdly, it’s no smoking which I don’t quite get because it’s an ‘L’ shape and I reckon everyone would be cool people fagging it over John Dalton Street, away from any eaters. I just don’t see the point of no-smoking terraces, rather like small diamonds.

I went with the Gay (Sam) and was told beforehand that the chef is great with meat but not with fish from a real foodie – funny because the Gay’s just the same. 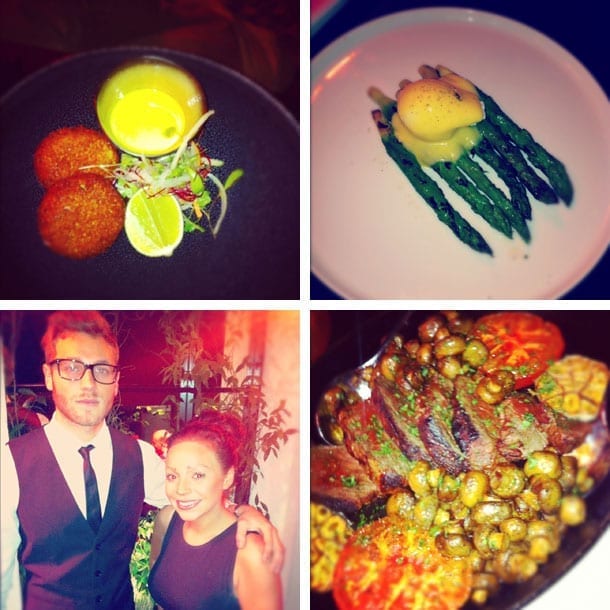 We were joined by Turks (Natasha) who entered into the spirit of the occasion, dipping in and tasting like a good one.

The Gay and I had starters. He had Thai fishcakes, which he manfully ordered to test the ‘not being able to do fish theory’. He adored them so much we had to wrestles morsels off him to taste as well. They were delicately flavoured and spiced perfectly – they do good fusion here.

My asparagus and poached egg with hollandaise, was light and just wanted I fancied to dip into with crunchy asparagus perfect to drench with yolk. Starters are from £5.25 and there’s a good range of English and slightly Asian-inspired choices.

We were washing this down with Prosecco at £25.95 and there is an impressive wine list, the cheapest bottle I saw was £22.95 as well as cocktails from £7.50.

But it was the main that has us groaning and doing Meg Ryan impressions. In fact both mains as recommended by our gorgeous and attentive waitress Sigourney.

The Chateaubriand – let’s see that one again.

OMG, it was the best piece of meat I have ever put in my mouth as you can see by the picture. It costs £52.50 but as there were three of us tucking in and squirming with delight, it is wealth worth it and if you’re on a date what could be more sensuous than cuddling under blankets and tucking into that.

They pride themselves on their beef here, using only the best British Hereford and Aberdeen Angus cattle and if you’re on a budget steaks start from £17 for rump. It is worth that bit more if you have a red meat hankering as so many restaurants get this wrong.

The other main was king prawns from the grill to dip in a coconut sauce as recommended by Sigourney.

The prawns were perfectly charcoaled and the sauce like a gorgeous runny soup I just wanted to pick up and drink.

This chef can do fish and again I would recommend if you have one dish on the terrace, go for this one.

There was absolutely no room for dessert, though we did try the Espresso Martinis, again one of our cocktail tests – as you would expect RBG came through.

If money is tight – and when isn’t it – it’s also really worth picking up a Club Individual loyalty card which you can use throughout the group of restaurants. Points really do mean prizes and if you eat out a lot, you could treat yourself to a free Chateaubriand.

This will be the spot to be in Summer but works well in Winter too, on the I Lovemeter – I’m marrying the Chateaubriand and probably having the prawns on the side too.