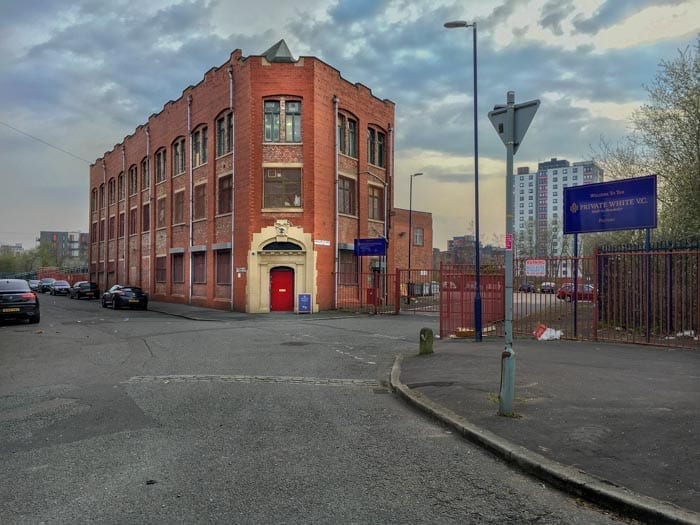 “There are three things that make Manchester great. Hard work, tolerance and its sense of humour”. These are the words of Mike Stoll, the owner of the building whose roof we’re standing on, and co-owner of luxury clothing brand Private White VC.

No one stays
in a job for forty
four years. I’m a
bloody lunatic

To our right, across the Irwell, is the new city centre, its glassed skyline sparkling like a magpie’s nest in the afternoon sun. To our left are Strangeways and other Victorian survivors and, beneath our feet, is a 19th century factory that is manufacturing clothes once more, just like when King Cotton ruled the Empire from this dirty old town.

Mike has been here since he joined as an apprentice at the age of 14. “When they had the Strangeways riots in the 80s I came up here to watch. I used to wave at the prisoners.” He rests his hands on his hips and looks around. “No one stays in a job for forty four years. I’m a bloody lunatic. I take perverse pleasure in going against the grain.”

“You and all Mancs,” I say in return.

We step inside onto the top floor where yellow, pink, white, beige and blue card dress patterns hang in their thousands, like an odd test for colour blindness, and ghostly particles drift in the light.

Derek, who has been at the factory for at least 10 years, looks up from where he is cutting 225 coat collars by hand with oversized scissors. The veins in his lean, pale forearms stand out like limbs beneath a cotton sheet.

“When I started here,” continues Mike, as we march down through the varied floors of endeavour, each stuffed with material, machines and staff, “there were 70,000 people in Manchester making shitty polycotton raincoats. Horrible. There were four hundred staff in this building alone when I arrived. When it got down to thirty I took over.”

We enter the floor where the machinists work. Seventy pairs of eyes glance up, but for no more than a second. They’re on piece work so it’s pointless paying me unnecessary attention. I listen to the speeding clitter-clatter of the machines and think that this is perhaps one of the most comforting sounds I’ve ever heard. Mike introduces me to Diane and Marian, who have been with him for more years than any of them wish to remember.

“I can’t see the cathedral out of the window anymore” says Marian “But the wildlife has come back to the river. I see kingfishers on the Irwell now.” Diane briefly halts her sewing. “We need to get more youngsters learning this trade. It’s a wonderful trade to have.”

Behind them hangs a Union Jack in the window. Another woman holds up a paper pattern further blocking the view into the city. Diane and Marian both tell me that the designer, Nick Ashley, son of Laura, often comes to see them.

“Well,” says Marian “You have to keep the machinists onside, don’t you?”

A colleague sitting opposite looks up and smiles. “That’s Ophelia,” says Diane, “She’s from Bulgaria and we’ve adopted her ‘cos she talks to us.” There are 16 different nationalities working in the building so English lessons are held three times a week in the staff canteen. “It’s a bloody good job,” smiles Marian, “we need the banter”.

Mike takes me over to Dot, whom he drove to her wedding 30 years ago. “I came here for an interview and there were police all outside,” she tells me, her olive green eyes twinkling but watchful. “It was in the days when wages were paid in cash at the end of the week, and they must have clocked what was going on. Anyway, the police let me through and I got the job.” I ask her if she’s from Manchester. “Born and bred” she replies, although her heritage is Italian. She’s marking jackets for buttons, and she tells me to take my coat off or “I won’t feel the benefit.”

We arrive in the office. Here we find James Eden, who is the son of Mike’s best friend and co-owner of the label. It was Jamie’s great grandfather, Private Jack White, who was awarded the VC in 1917 and who worked in the factory, before going on to own the business. Jamie’s bulldog, Brutus, is vaguely asleep nearby.

On the ground floor is the shop, which is beautiful. I run my fingers across the cloth of the coats and jackets and feel like I’m touching history. The material used is manufactured for them locally and is unique.

Coming here to buy clothes rooted in a world long gone, crossing the footbridge from Manchester across the Irwell, past the red bricks and rubbled grassland, must be a unique experience in the world of luxury retail. But then Manchester has never done things normally. As Mike put it, it takes a perverse pleasure in going against the grain.

The photographs for this story are taken entirely on an iPhone 6, using the native camera and various apps for post production. It’s a simple way of working.