Priscilla Queen of the Desert review: the cast are hot stuff but this production needs more colour and cash

When the hit musical Kinky Boots came to Manchester last year, the cast and set design gave it real West End quality. You really got bang for your buck.

Like Kinky Boots, Priscilla Queen of the Desert began life as a movie 25 years ago. This feels like the perfect opportunity for the producers to spend some cash on recreating the big bus, driven by two drag queens and a transgender woman as they embark on a road trip filled with self-discovery, comedy and conflict.

The story remains the same, apart from the odd contemporary reference and a bit more Kylie than the original show. These three mismatched individuals have one thing in common – they love to perform.

Tick (played with a real sense of joy by Joe McFadden) becomes Mitzi on stage but is keeping a big secret – he is a dad and a husband. Bernadette (Miles Western) is the leader of the pack and has been wowing audiences for years in her troupe, Les Girls. Adam (Nick Hayes) is bitchy and feisty but deep down wants to be loved, so his Felicia is the perfect mask for him to hide under a rock.

Aiesha Pease, Claudia Kariuki and Rosie Glossop play Three Divas, who hang around like The Supremes at a Motown convention, providing backing vocals and lifting the show with their vivacious vocals.

So far, so good. The show pretty much does what you expect. Stephen Elliott’s book sticks closely to the film and every now and then a hit song turns up like a bus to whisk you away whenever you are feeling you need a lift.

Donna Summer’s MacArthur Park is used to the best effect when Bernadette leaves a cake outside in the rain. Cue vocals. The hits are delivered at speed and some are more successful in conveying the narrative than others. An original song or few would not go amiss.

The problem is that Priscilla is a big show and The Palace is a big stage. It deserves a vast set, including the infamous bus. After all, the show is named after her. But here you get a few bits of MDF sprayed and pushed together. Corrugated fences surround the stage, there is no revolve and everything feels a bit too cheap, albeit always cheerful.

Ian Talbot’s production does what you want from a show like this and the performers give it all they have got, including a hard-working ensemble. But watching the Three Divas pushing bits of set on and off stage starts to feel like a drag, if you’ll forgive the pun.

Joe McFadden is a very good Tick. He feels like a man keeping something to himself beneath the lip gloss and Cher wigs.

Miles Western has the right number of pauses as the witty war horse Bernadette, as she contemplates her next move. Nick Hayes brings down the house with his waspish humour and Kylie tributes and you feel his character’s pain, when he confides in you. Daniel Fletcher is sweet and humble as Bob, an Aussie who arrives to the rescue in the middle of nowhere.

Bravo to the cast as they are hot stuff. You go expecting something with campery and splendour so it’s a shame that the costumes, set and production values could do with a bit more colour and cash.

Priscilla Queen of the Desert is at The Palace Theatre until 30th November. 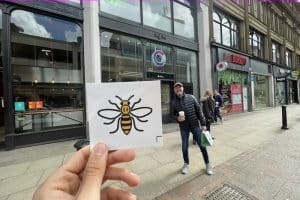 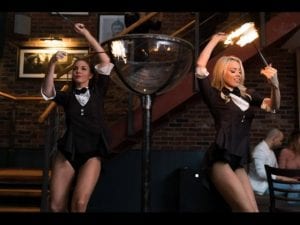 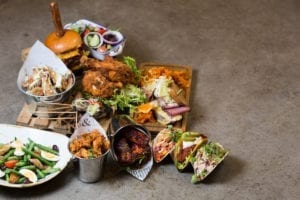