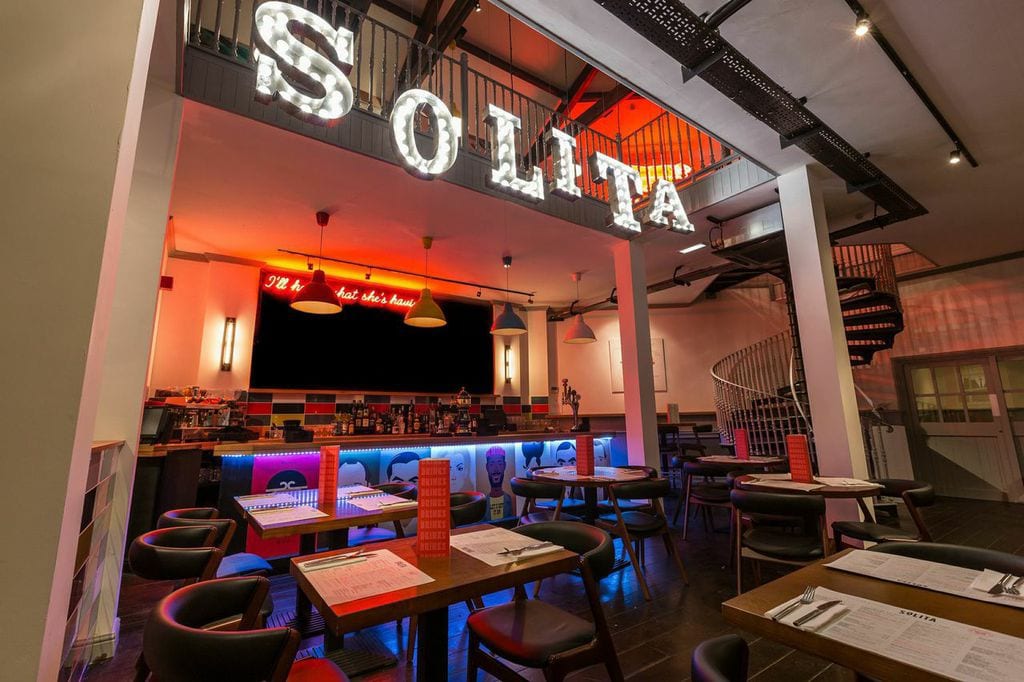 Solita, home to Manchester’s best burger is set to open the doors to its eagerly awaited second venue, Solita Didsbury, at 6pm on Thursday 18th September. Taking the popular concept south, the official opening of the bar and grill restaurant is after an invite only celebratory shindig (Wednesday 17th).

With a nod to its urban sister, Solita Didsbury on School Lane in Didsbury Village has been designed with rustic feature lighting, bright colourful accents and a flash of neon. Luxurious banquettes, booths and tables and chairs provide 140 covers over two floors and a south facing alfresco dining terrace offers the perfect people watching opportunity.

(Pictured above: soon to be the most blogged neon in town)

The menu echoes favourites found at the Northern Quarter restaurant, which is recommended in the Good Food Guide. Signature burger creations such as the Manc-Hattan and grain fed Angus steaks star with new burgers expected to be announced on opening day.

Solita’s weekend brunch offer, **loved by controversial critic AA Gill, also makes the menu. In a slight departure from Solita northern quarter, diners at the Didsbury restaurant can also opt for a lighter touch with choices including charcoal grilled chicken, grilled fish of the day and seafood skewers.

Co-owners Franco Sotgiu and Simon Pogson opened Solita on Turner Street, Manchester in 2012, aiming to deliver an American grill with a dash of Italian flair. Less than three years on, SoLIta Manchester has firmly established itself as a hit with diners and social media loving foodies. In fact many of the invitations to the pre-opening party on Wednesday 17th were given to fans that entered a competition to win an invite via twitter, stating why they deserved to attend. The lucky winners will attend the party alongside friends, family and Solita’s new commercial and residential neighbours.

“We’re excited; at last we’re almost here. We took our time, hoping to get it just right. We had to completely gut the kitchen and the interior has been transformed. As for the food –we’ve added to the menu, which we know is loved in Manchester but we wanted to add a lighter touch too. Of course we’re looking forward to bringing our burgers south of Manchester, we have some exciting new ones to reveal as we open. We’ve been busy in the development kitchen too – early taste tests have suggested our new lobster and sweetcorn hushpuppies could be the star of the menu and we’ve created what we think is a rather special new dessert –Jaffa cake ice cream pie with Grand Marnier sauce.”

Solita Didsbury opens 6pm 18th September and will open seven days a week, from noon until late during the week and from 10am ‘til late at weekends. Advance bookings are being taken now via www.solita.co.uk or 0161 434 4884.