Pound Pubs: Cheap Booze Or Bang For Your Buck?

Does your opinion of Pound Pubs depends whose bum is on the barstool? 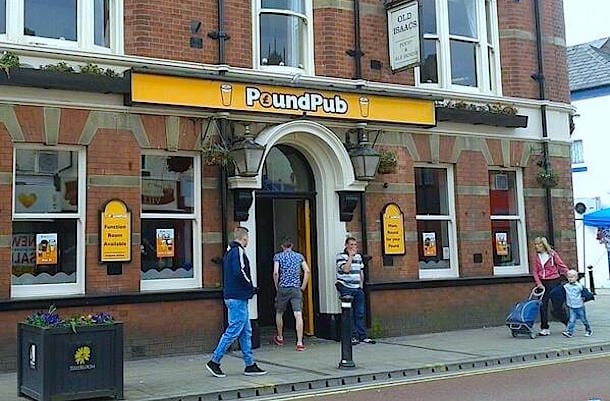 Believe that all publicity is good publicity?

Probably, if you’re Mike Wardell, the man behind the ‘Pound Pub’ – currently a chain of two (Atherton and Stockton), but with plans to grow.

“You can’t polish a turd,
but you should at least try.”

Eccles, a once bustling market town in Salford which has been in decline since the Trafford Centre opened up just down the road, further compounded by recession, is next on the list of locations.

In case you didn’t know, the concept is simple – all halves cost £1, and pints are an extra 50p.

The rhetoric from the business is that pubs are closing due to competition to cheaper supermarkets, so if pubs can reduce their prices to tempt back customers, then they should. 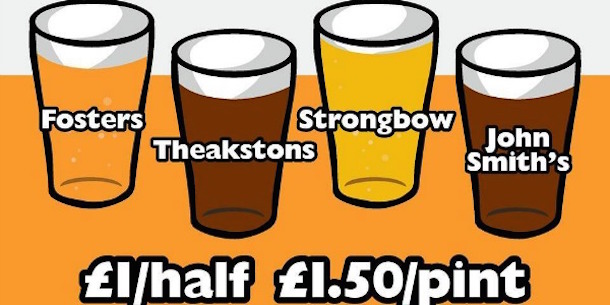 The Daily Mail et all claim it will encourage binge drinking, loutishness and all the other sorts of behaviour that people who pay more than £4 a pint never ever indulge in, officer. Honest.

If you look at the pubs in Eccles, most of them are up for sale. So a new operator coming in should be supported, shouldn’t they? If they adhere to the laws of the trade and participate in responsible drinking initiatives?

What’s sad is that it’s a reflection of the times we live in, but society can’t have it all ways. People are hard up, but you can’t promote ‘pubs as hubs’ and eulogise about them as glue that holds communities together for the sake of a local by-election soundbite, as many politicians and commentators do, then vilify them for effectively becoming what working mens’ clubs have always been.

I remember going to the Carlton Bowling Club near Chorlton a fair few years ago, cut from the same cloth as the workies’ that I spent my formative years drinking in, but which had been leapt on by the incoming suburban hipsters, and treated as some quaint, ironic glimpse into working class life. They guffawed at the cheap prices. The barmaid, who’d been there some years, rolled here eyes and contemplated the curious tension of simultaneously accepting money to put into the till and hoping your customers would leave and never, ever come back.

They were treating it like a novelty. Some funny little zoo with carpets, where the locals were treated like curiosities. I bet they’ve never even heard of ciabatta!

Nearer to me these days, Eccles Liberal Club still upholds the virtue of cheap drinks for the working man in a convivial atmosphere. It’s not a fad, or a response to the market. It’s their business model. It’s been there for years.

So if a Pound Pub or similar decides to adopt the same strategy a bit further down the road, in an attempt to breathe some like into the pubs of those high streets in decline, is that such a bad thing?

The way I see it, it’s all about the image.

Feted by The Telegraph among other over the years for its ‘value for money’, and go-to destinations for any Northerners living in London. In Manchester, Sinclair’s Oyster Bar in the city centre will do you a pint for not much more than £2. It’s regularly rammed out, especially on weekends.

Pound Pub has, however, gone for rather gaudy branding, that neither the pub purist nor the aesthetically minded are likely to fall in love with. It looks cheap, rather than ‘value for money’. The messaging is key.

But whereas The Guardian think it fine to ask ‘where is the cheapest pint in Britain?’ Pound Pub seems to be getting knocked around for providing the answer.

And here’s a thing to ponder while you’re nursing your £1 half. Sales of Prosecco went up by 74 per cent in this country last year, according to Kantar Worldpanel. And why is that? Are we all getting posher? Or is it that actually, Prosecco is getting cheaper?

Not just for us urbanites as we dance around the supermarket aisles, where you can happily buy a bottle of sparkling plonk for under a fiver. But in ‘posh’ bars too.

Kantar claims 13% of the category’s volume is accounted for by couples having a night in and it’s the discount chains such as Aldi and Lidl where sparkling wine sales are flying – up by 25.4% in the last year.

But its also cheaper for bars to buy than champagne and thereby cheaper to re-sell to the customers they are trying to entice through their doors. CGA Strategy reporting an on-trade sales growth of 14% in the 12 months to May 2014.

No cries of outrage there though. It seems that beer merchants get a far harder time for rejigging prices to get bums on seat than wine bars. But they all do it.