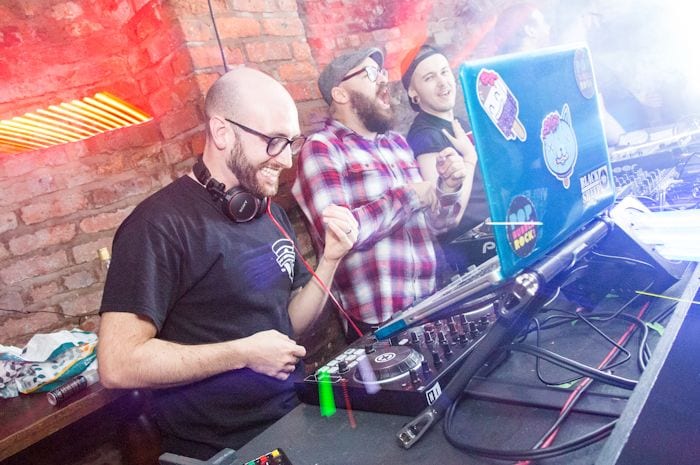 In 2006, University of Manchester student Ben Hiard decided to throw a party. He’d saved up the money and bought himself some DJ decks. All he needed was a crowd.

In the build-up to the big night, he acted like an eternal optimist, stuffing freshly-printed flyers into the hands of passers-by and promising them an evening to remember. But his happy face was a façade. In reality, Ben was fighting the inescapable fear and doubt that haunts every party host. Would the event look any good? Would it be fun? Would anyone actually turn up?

“I quite simply wanted to organise a club night which played the music my friends and I wanted to hear, in an atmosphere that we’d enjoy,” Ben says. “I didn’t think anyone would actually come.”

That first Pop Bubble Rock completely sold out. Manchester had officially had its first taste of the offbeat independent club night and, from then on, the hunger for PBR became insatiable.

Pop Bubble Rock hit a big milestone on Saturday – celebrating its 10th birthday. From the moment we arrive to join the revelries, Ben is buzzing around Joshua Brooks like a bluebottle on Red Bull to help keep things in full swing.

The party he threw a decade ago is still going strong and evidently so is his enthusiasm. He’s not spending huge chunks of time behind the decks this evening, but his trusty team of fellow record spinners are doing alright without him, throwing on banger after banger to keep the party jumping late into the night.

The PBR team promised to pull no punches for their anniversary bash and they’ve made their jovial presence in the Princess Street venue felt with extravagant use of decorations. The underground room – which usually caters well for nights of grungy hip-hop and dirty tech house – has been dressed up to the nines with vibrantly coloured balloons and ribbons.

Every half hour or so, confetti tumbles from the ceiling and drifts down to join the twisting limbs on the dance floor. It’s as though the Joshua Brooks basement has decided to take a quick holiday – ditching its ordinary dark vault look in favour of something more flamboyant and carefree.

The upstairs bar is set up a bit like a college common room. Some guests stand in the corners, holding takeaway boxes aloft and tackling greasy slices of pizza. Others spend their time button bashing on a retro games console hooked up to a big projector screen. Everyone else is squeezed onto the dance floor downstairs, roaring along to pop-punk, hip-hop, chart house and indie tunes.

But wherever you look, everyone is genuinely enjoying themselves. JB’s is suffused with smiling faces, a palpable, pleasant atmosphere permeating the thick brick walls.

“Pop Bubble Rock is all about having fun,” Ben explains. “It’s about being with your friends and making new ones and being too busy dancing and smiling to stop and worry about what anyone else thinks.”

After chatting to a few different people during the night, it was evident that the ticket holders in attendance at PBR were as eclectic as the music that engulfed the venue itself. Ben’s ideas for the event have changed over time, but diversity was something on the agenda from the very beginning.

“Pop Bubble Rock is an inclusive party where girls call the shots and not just pour them like at some other nights,” Ben says. “Everyone feels welcome and it’s the crowd who make it what it is. They’ve always got what we’re trying to do and it’s simply the most friendly and fun club night in Manchester.”

Perhaps the success of Pop Bubble Rock can be attributed to its authenticity. Ben and his buddies aren’t in the events business to make a quick buck. They don’t crank up the bar prices when they come to town or flog tickets for fees that would make The Viper Room bosses blush. They want people to have a good time and that’s all there is to it. By side-stepping typical club trends and sticking to their guns, they’ve ensured Pop Bubble Rock has developed a loud, proud, peacockish personality that makes it stand out from the competition.

The youthful exuberance of the 10th birthday celebrations demonstrated why PBR has been one of Manchester’s most popular independent club nights since Ben Hiard held that first party at Scu Bar back in 2006.

It’s a warm, friendly, fun event designed by nice, genuine people, and it’s great to hear there are no plans to stop the party just yet. It’s back on Halloween weekend with an ingeniously tweaked moniker – Pop Bubble Shock.

Joshua Brooks again plays host with the bar set to stock a selection of spooky cocktails for the occasion. So if you’re looking for a Happy Halloween in every sense of the phrase, joining Ben and co on Princess Street on 29th October could be the answer.