Heartbreaking news for Manchester’s residents as iconic dancing legend Ray Boddington of Piccadilly Rats fame is in intensive care after being hit by a tram in Manchester city centre.

The collision happened on High Street just outside the Arndale on Wednesday at around 7pm – after he is believed to have finished performing at the Northern Quarter’s Millstone Pub.

After paramedics and police responded to the incident, Ray was taken to Salford Royal hospital where his son Daniel has confirmed he remains in a life threatening condition and is being kept alive by a ventilator.

In an emotional Facebook post, Daniel confirmed the extent of his dad’s injuries, which includes a shattered spine and significant head injuries.

Until now Ray remains unresponsive to attempts to wake him from his coma, with nurses confirming if he remains in this state until Saturday, the best course of action would be to withdraw life support. 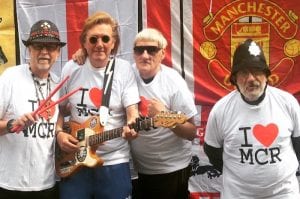 “My dad got hit m[b]y a tram, he has a shattered spine and his skull cannot be operated on as it’s that bad,” wrote Daniel.

“He has broken bones and they said the machine is keeping him alive.

“He is not reacting to any treatments to wake him up. He’s in a coma and his brain is damaged to the point it can’t be fixed.

“The nurse said if he has not responded by Saturday morning, it is best to turn the machines off that’s breathing for him as after there tests and x-rays etc he won’t be able to survive as the injuries are so bad.

“It hurts writing this but my dad would want his friends to know.

“If you know my dad you know he loved everyone… he loved life.”

Ray has developed an army of fans over the years. If you’re not familiar with his name, you’ve probably seen him on TV as he has appeared on both The X Factor and Judge Rinder. 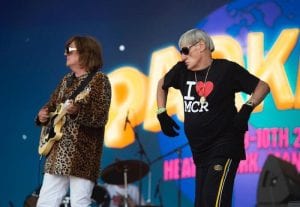 Just last year, the retired hairdresser and his Piccadilly Rats band mates were given the opportunity to perform at Parklife.

The festival founder Sacha has spoken out about the incident. Taking to twitter he wrote: “I hope he pulls through. Everyone loves Ray and the Piccadilly Rats. Market St Legends. He’s a real Manchester character. Come on Ray!”

I hope he pulls through. Everyone loves Ray and the Piccadilly Rats. Market St Legends. He’s a real Manchester character. Come on Ray! https://t.co/z6gRe8pHCL

The Piccadilly Rats are made up of founders Ray Boddington and Gaz Stanley and several other friends including Tommy Trouble, Alan Jones, and Robert Branch.

The thoughts and prayers of everyone here at I Love MCR HQ are with Ray and his family during this tragic time.