An alternative report into the future of Manchester’s Mayfield district, a 24 acre site behind Piccadilly train station, has been launched by The Mayfield Imaginarium Collaborative (MIC).

The report, which incorporates the views of over 500 members of the public, reveals that public aspirations are vastly different to the conclusions of an earlier report conducted by Manchester City Council.

The top five words used when people were asked what they would like to see Mayfield become were creative, exciting, green, innovative and unique.

Many people would like to see Mayfield have its own unique architectural style which valued its heritage whilst preserving the Star and Garter as an independent business. 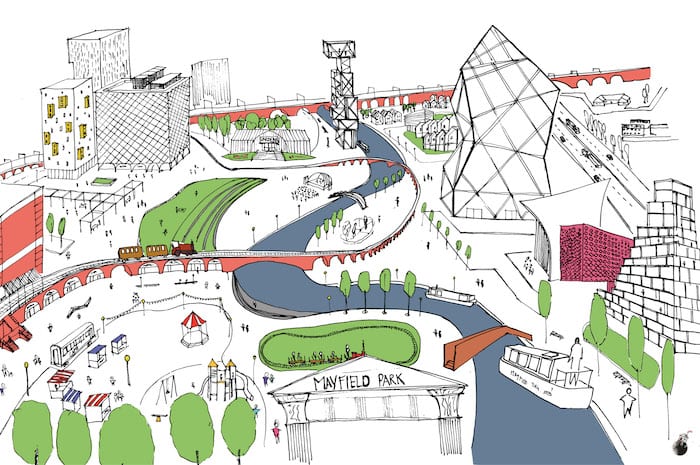 MIC hopes the development will incorporate the community’s aspirations for the area including the re-use and preservation of heritage, long-term community infrastructure and investment in the creativity, innovation and health of all aspects of this new neighbourhood.

The group, which includes academics, architects, planners, artists and campaigners, has asked to meet CEO Richard Upton of developers U+I to present some of its findings at an upcoming MIPIM presentation.

Upton has said the regeneration will deliver something world class for Manchester and that U+I will work with a range of professional, academic, third sector, civic and community groups to ensure the Mayfield development reaches its optimum potential.

Daniel Kelso from ‘architecture: unknown’, the group that collected and summarised the public’s opinions for the report, said: “Our findings differ greatly to the Strategic Regeneration Framework findings of Manchester City Council. Those reports suggested the removal of Mayfield’s history, mainly advocating the demolition of the site.

“The word affordable was not once used in that report regarding housing. Their report did not cover creative bases which our public research has found, which illustrated that people hope, and dream Mayfield can be unique.”

Adam Prince from civic empowerment pressure movement Manchester Shield said: “There is great discord in the city at the moment regarding how consultation and engagement are being handled by politicians and other developers.

“Mayfield is a vital opportunity to work with an incredible developer in a completely new district of Manchester. But more than that and beyond Mayfield, we will now be working to advocate new models of engagement and consultation, valuing citizens rather than ostracising them.”