He bangs the drums: meet the drummer from not one but two amazing Manchester bands 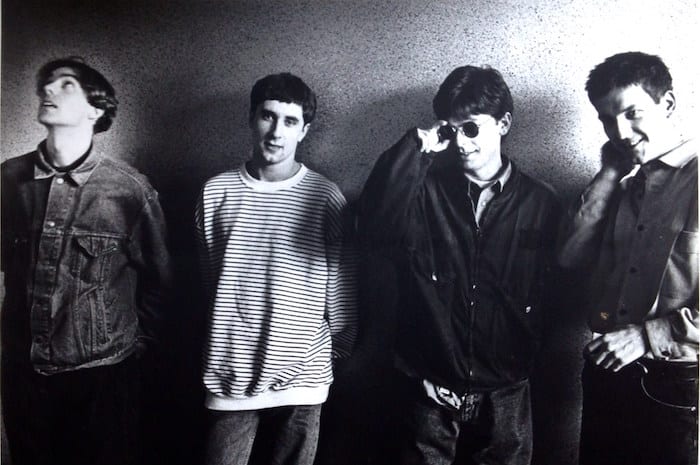 Four tracks by The Waterfront and The High have been lovingly remastered as part of a special Record Store Day release. Proceeds from sales of The Waterfront releases will go to The Christie.

Although the band never gigged, they recorded two tracks in a small studio in Dukinfield. A handful of cassettes were distributed among friends and to local venues.

Andy and John later formed the Stone Roses, with Mani joining a few years later. Chris ended up in numerous bands before having success with Andy, John Matthews, and Simon Davies in The High.

They signed to London Records after only one gig. Their highly acclaimed debut album Somewhere Soon was released in 1990 and received rave reviews. The High had three minor UK chart singles before hitting the top 30 with the re-vamped infectious box set Go.

The band split in 1993 and reformed in 2015 with Tony Meehan replacing Simon Davies and Jack Couzens taking over from Chris on drums.

I was fortunate enough to have a chat with Chris Goodwin who was right there at the birth of both of these bands. Right in the thick of it when the Hacienda was in full flow. Here’s what he had to say.

So, Chris Goodwin, drummer of not one but two amazing bands. How did The High come about?

We only actually played a few gigs and got signed up quite quickly. First gig was at The Ritz. We got signed up at the Hacienda, did about three or four gigs then signed to London Records. Made a couple of albums, one that didn’t get released, one that did.

How did it go from what you were doing, drumming for The Waterfront to The High?

Me, Andy and Simon were backing Steve Diggle from The Buzzcocks. He had a band called Flag of Convenience, or Buzzcock FOC as he called it then, and we did a couple of singles with him, toured a bit and then, in typical Manchester fashion, we all fell out. So then Andy, myself and Simon got John Matthews on board and formed The High. I knew Andy from the Waterfont days anyway.

Do you still see them? Have you all made up now?

Yeah I do. I went to see them play. The High have reformed now. I didn’t reform with them but I did get to see them in Manchester the other week.

And how was it?

Good. Very good actually. It was weird though looking at it from the other side. I also had another band called One Summer. Me and John were in that band and we did a gig recently, just a one off for Vinyl Revivals and that was a sell-out as well. So that was pretty good.

Do you miss being in a band?

I do and I don’t. I kind of fell out with music after One Summer. Moved away from Manchester, moved up towards Southport and got a proper job. Oh actually, no I did some stuff with Electronic with Johnny Marr and was on Top of the Pops with them, couple of videos. So it was a good way to end my music career in a way.

I bet you have some stories.

Did you get involved at all with the writing of songs or anything?

We used to record over at Andy Couzens house over in the Adlington area. Just all get together. John would have some lyrics, Andy would come up with a riff and we’d just jam it out, fit it all together. Somewhere Soon for example took about a year, year and half. Loads of practices. We ending up rehearsing at Beehive Mill where Sankeys was and actually recorded at Richard Branson’s house in Oxford.

Didn’t try and get you up in his hot air balloon did he?

No he didn’t. Nice fella though. Good time for us that. Didn’t have jobs, Hacienda was in full flow. Hacienda pretty much every night.

I would have loved to have been around when all that was going on. Do you look back on it fondly now?

Yeah it was amazing for us, especially as we didn’t have jobs, so we could go out most nights if we weren’t doing anything. Partying all the time. John and I pretty much lived in the city centre. We were right in the thick of it from day one.

Do you get to Manchester much now?

I love it. I love the place. I remember when I moved up here I got a bit homesick. But Manchester is even better now when I go, and I do go quite a lot. Quite a few gigs, a lot of my mates live there. It’s developing so quickly, stuff going up everything, cranes everywhere. It’s a fantastic place.

I’m from Wigan myself and I love the place also.

We’ve probably been on the same Southport train.

Probably yeah. So gigs in Manchester, where in your opinion are the best places to go?

Gorilla is quite good. I personally always loved The Ritz. Academy. Depends who you’re going to go and see.

Where was the place to go back in the day that you’d wished you’d played, apart from the Hacienda?

The Boardwalk was brilliant. Just local lads into football, fashion and music. Shaun Ryder, Bez etc. You could see the scene building from there, even before the Hacienda.

Do you have any inspirations yourself, either drumming or just for yourself?

We were all into early REM. The look and his style was always pretty cool. But Donald Johnson from A Certain Ratio, loved his drumming and still do. Went to see them the other week at The Ritz in Manchester.

If you could drum for any band who would you drum for?

There used to be this place in Hulme called The Kitchen and it’s just these two flats knocked together. Sometimes there’d been this reggae band like rastas with a guitar, some drums, amps and that was it. There was this one night, which is in Shaun Ryder’s book by the way. He was there, Hooky (Peter Hook), Bernard Sumner and myself decided to speak to these rastas. “Give us a go on the drums and the guitar,” we said, pissed up. Anyway they let us have a go and we decided to cover Age of Consent by New Order and I just thought what a perfect band to be in this would be in. Sean on vocals, Bernard and Hooky and me on drums.

What about best places in Manchester to go now?

I don’t get in that much. I’m fifty odd mate I probably couldn’t tell you. Ruby Lounge is good, Fab Cafe, and probably Night and Day.

When you come into town do you get stopped all the time?

Yeah I do a bit. Especially back in the day, I couldn’t move for bumping into people.

I bet that’s why you moved away isn’t it?

The remastering of The Waterfront and The High’s tracks, what prompted that.

Well it’s for a good cause isn’t it but it was Colin White of the Vinyl Revival saying I’d love to get the Waterfront’s tracks on the next one but I don’t think the lads in the Roses would be up for it, but he managed to turn it around. It’s amazing for it to come out after all this time. The remastered version is a lot better, I mean the original was recorded in someone’s front room in Dukinfield so yeah it’s a lot better.

Normandy (On the Beach) and Where the Wind Blows by The Waterfront and Say it Now and Sugarpuff by The High are available on Saturday, April 21, Record Store Day.