National Football Museum: You Don’t Have To Be A Football Fan

The National Football Museum has become a big fixture for both visitors and residents of Manchester, with almost 1.5 million visitors since opening in the iconic Urbis building nearly three years ago.

“not all of our visitors will
be football fans themselves
so we make sure that
everything is as engaging
as possible for all ages.”

Now a new collaboration between the museum and Mancunian photo-bloggers The Mancorialist has put those visitors at the heart of the attraction’s latest ad campaign.

“Over the last few years we’ve spotted what a great mixture of visitors we have, helping make the museum a unique place to visit,” explained NFM marketing manager, Philippa Duxbury.

“People from all over the world are drawn to Manchester because of the city’s relationship with football. But it’s the visitors from near and far who you don’t necessarily expect to be football fans who also catch our eye.”

The work with The Mancorialist was born from a desire to reflect the variety of those visitors. The images feature old and young, male and female visitors from a wide range of backgrounds and locations. Families, tourists, football fanatics and museum-lovers are all in there, painting a uniquely Mancunian picture of this must-visit attraction in the city centre. 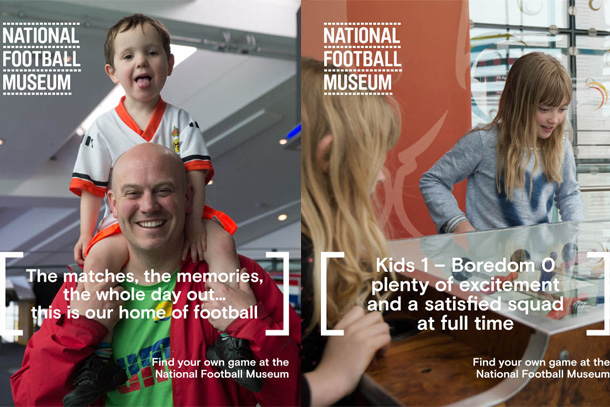 The museum isn’t afraid to look at football from different angles, both as a sport and a cultural phenomenon. As an independent charity it can look at and reflect organisations like FIFA, the FA and the Premier League with the same detachment as football fans, recognising the good, but not afraid to show the bad.

So treasured memories from FA Cups and World Cups past are in the galleries alongside poignant reminders of those who died in stadium disasters, and weapons seized on terraces during darker days.

A new exhibition, Out Of Play: Technology & Football, explores the impact of tech on how we all enjoy the beautiful game. Displays include a series of hacked gifs showing El Hadji Diouf being fouled by various opponents, an energy-generating ball, a footballing robot and the world premiere of an artwork that shows the World Cup final via thousands of tweeted images. It’s an innovative and creative approach that reflects the museum and its visitors.

“We’re now commissioning new artworks inspired by the world’s most popular sport”, explained Duxbury, “as well as continuing to care for its greatest heritage collection.

“And this approach reflects the visitors we see here every day. Some love the history, some love the new ideas and perspectives we can offer. We’re aware that not all of our visitors will be football fans themselves so we make sure that everything is as engaging as possible for all ages.”

With a collection that’s the best in the world, some fascinating new displays, and the genuinely absorbing exhibition The Greater Game: Football & The First World War running until September (£1 admission, free for under 16s), now is the perfect time to join the crowd at a Manchester landmark to be proud of – whatever you think of the beautiful game.