Based in the North, his delicious, healthy food is inspired by a love of the varied flavours and cultures found in The Levant – a crossroads of western Asia, the eastern Mediterranean and northeast Africa.

With MorMor proving a massive hit at street food venues across the UK, Hugo, who now works with his older brother, Josh, has his sights set even higher, launching a third venue and two new food ventures.

Working in a bar, Hugo would visit the Middle Eastern restaurant adjacent and try different dishes.

His passion for this type of cuisine led him to cook it for his friends at dinner parties and he started to consider if he could turn it into a business.

At this time, Josh was living in Sweden, managing bars, something he has done throughout his career.

Speaking about the launch of MorMor Manchester, Hugo said: “I visited a street food spot called Dinerama in Shoreditch and saw the potential for the food I’d been cooking for friends and family.

“I decided to approach Ben Davy, who was the development chef at Belgrave Music Hall in Leeds at the time, about doing a pop-up there.

“He told me to go away and think about what the brand would look like, choose a name and work on a menu.

“He loaned me some equipment to get me started.” 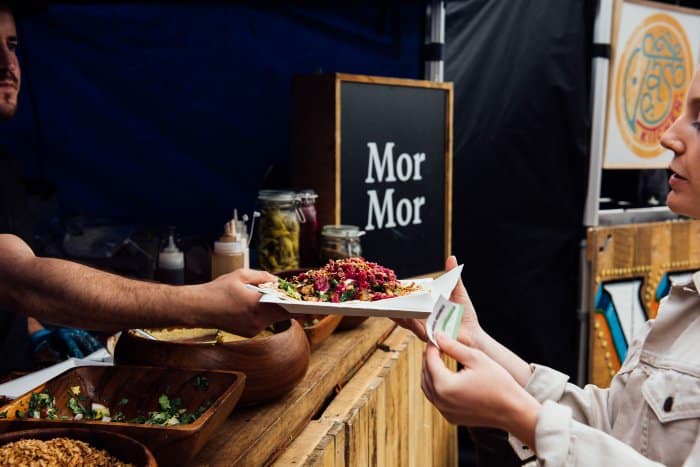 Hugo and Josh’s heritage is a mix of Eastern European and Danish. They were brought up on a culturally diverse diet, with cooking and food ever present in their family kitchen.

It’s no surprise that Hugo started MorMor from his mum’s kitchen, and drew inspiration for the name from the Danish word for Grandmother, MorMor.

He jokes about her being the inspiration for his choice to cook Middle Eastern cuisine.

“I did about 56 events between launching MorMor in 2018 and March 2019 so I knew I was doing something right,” says Hugo.

“I had found a niche cuisine that people liked. 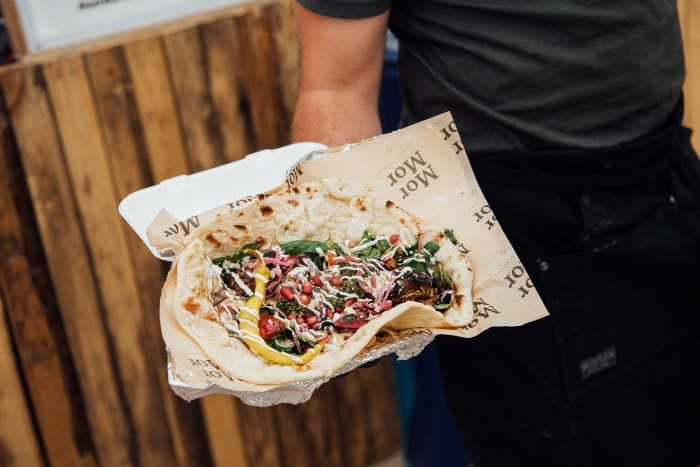 “At the time things were a bit hectic and I was prepping solo for around 14 hours a day, out of my mum’s kitchen, before I moved into a proper prep kitchen with James from Little Bao Boy.”

Josh moved back from Sweden in late 2018, and because Hugo wanted MorMor to develop and to attend more street food events, he asked him to help out.

It wasn’t until MorMor was invited to take a last minute residency spot at Kommune in Sheffield in 2019 that they decided to partner up full time and really push the brand forward.

With two heads better than one, and more hands on deck to prep the food, MorMor went on to win the British Street Food Award for the Northern heat in June 2019.

They also came second in their category at the finals heat in London.

These accolades spurred them on and, for the next year, they continued to appear at Kommune before achieving a second permanent residency at Hatch in Manchester.

“We had totally smashed it in our first year of working together,” says Josh.

“Confirmation of the residency at Hatch in Manchester was really exciting because, at the same time, we took on a warehouse space that we turned into a prep kitchen and we were looking forward to 2020 being a year full of music festivals and events.

“We were ready and raring to go, but then COVID hit and those plans got massively put on the back burner.”

With the pandemic hitting MorMor in much the same way as it hit the entire hospitality industry, the brothers took this time to come up with new concepts for their brand.

Noticing another gap in the market, they hit upon the idea of a pasta/Italian trattoria idea called Paisano, based on their love of Italian food, and a second, smash burger concept, called Good Boy Burger.

Both of these can be found at food events all over the North this summer, served from their new, to them, 1967 Fiat food truck.

“Hatch has been in the pipeline for a while, but got shelved twice,” says Josh.

“However, over that time we’ve upped from a tiny courtyard space to a triple container, so we’re going to be able to offer so much more to our customers.

“Hugo is the madman in this partnership. I try to reign him in with my managerial head, but his passion for what he does, and his non-stop attitude spurs him on to seek out new opportunities all of the time.

“We’ve recently taken on another site in Liverpool and will be launching our third MorMor at the end of May.

“With the hospitality sector finally waking up from its long slumber, we’re ready and raring to go with all three, and to continue to push our two new food ventures.

“It’s crazy that we went from barely seeing each other for ten years to living and working together over the last two years.

“It has been a wild ride so far with some pretty cool things to come.”