Miller & Carter Reviewed – Why go out for a Burger when you can have Steak?

Everybody loves steak. Apart from vegetarians.

When Hollywood actor Paul Newman was once asked why he was faithful to his wife, his reply was, why go out for a burger when you can have steak at home?

“The best steak in Manchester?”

He probably wasn’t being sexist. He was just comparing the women who made themselves available to him unfavourably with his wife. He was also suggesting burgers are inferior to steak.

After all, the humble burger was once steak’s poor relation. For a start, it was cheaper because it often contained cheaper ingredients.

Then it went upmarket and became 100% pure ground beef. Then it got dressed up and became as expensive as steak. 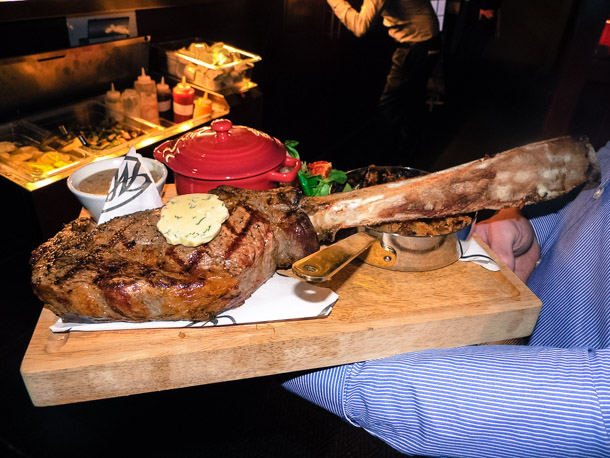 Now it seems that the burger has become our favourite dish. Manchester’s been going burger mad for a while now. There are hundreds of places you can get a big fat gourmet burger with all the trimmings.

Steak used to be the height of luxury. But now that we’re all much more sophisticated about food, when we’re not eating £15 burgers we like to dine out on salmon poached in a liquorice gel or turbot cooked in fermented cabbage with a raspberry coulis.

Now we like a good burger and we like truffle-poached chicken with baby artichokes, too. But steak and chips was our first love and as such will always have a special place in our hearts. And stomachs.

And we’re not the only ones. Dinner Date on ITV2 is a cross between Come Dine With Me and Blind Date in which one lucky person is presented with five menus from which to choose three blind dates. The men always pick the menu which offers steak. And it’s probably still most footballers’ favourite dish, too.

Miller and Carter sounds like a comedy double act but it’s actually a chain of steakhouses which seems to occupy the middle ground between Beefeater and Gaucho. Its first Manchester restaurant recently opened in what used to be the private banking area of the old Lloyds Bank building on the corner of Cross Street and King Street. 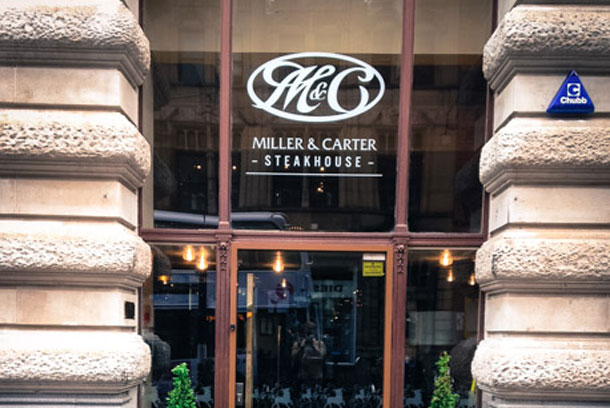 No exposed floorboards or brickwork here. The decor is traditional and comfortable with carpets, banquettes and lots of deep reds and browns.

Although the restaurant specialises in 28-day aged British steaks, there are lots of other dishes to choose from including lemon and chilli roast Shropshire chicken (£12.50), grilled goat’s cheese tart (£9.95) and baked sea bass (£14.95). They even do prime burgers (£10.50). In fact, we were spoilt for choice.

I chose sirloin (rare) and chips and my companion chose ribeye (medium) and baked potato. The steaks were accompanied by a slice of onion loaf, a refreshing iceberg lettuce wedge with a choice of dressing and a choice of steak sauce. My steak could have been warmer and the bordelaise sauce wasn’t to my liking but the steaks were tender, succulent and full of flavour and the onion loaf was tasty. 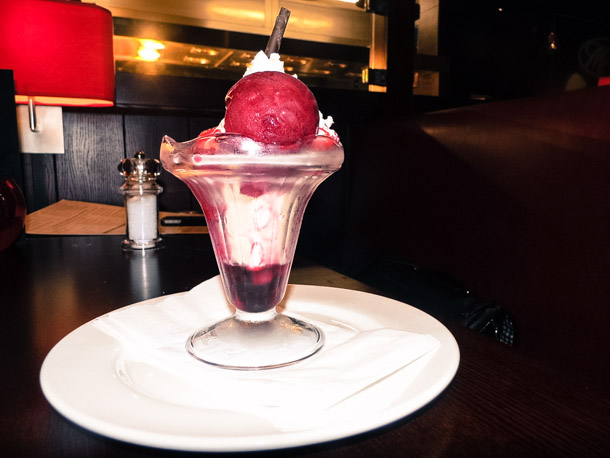 For dessert we chose a Belgian chocolate ganache (£6.25) and a summer berry and white chocolate sundae (£5.95) which were both delicious.

The best steak in Manchester? Probably not, no. Did we like it? Yes we did. Would we go back? Yes we would.

Miller and Carter isn’t Gaucho but neither are the prices.

Why go out for a burger when you can have steak?