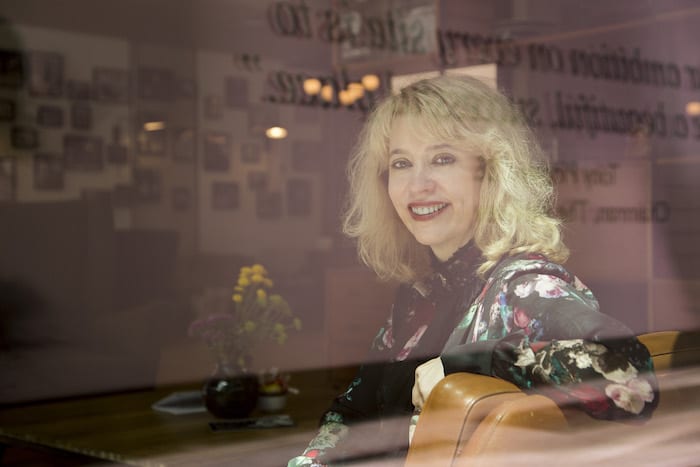 Stockport-born director Carol Morley made a splash in 2011 with her semi-documentary Dreams of a Life about Joyce Carol Vincent, who died in her London bedsit in 2003 but was not discovered for more than two years.

She followed that with The Falling, a mystery at an all-girls school that starred Game of Thrones’ Maisie Williams and Florence Pugh (in her debut role), alongside Maxine Peake.

Her new film Out of Blue continues the vein of mystery that runs throughout her films.

Adapted from the Martin Amis novel Night Train and inspired by Morley’s love of film noir, the film stars Patricia Clarkson (Sharp Objects) as Mike Hoolihan, a homicide detective investigating the shooting of a leading astrophysicist.

Carol has nothing but praise for her leading lady.

“She’s very classy, is Patricia. She brings a gravitas to that role and you feel that things are going on under the surface with her. She brings Mike to life in a way that feels very authentic to a homicide detective.

“Somebody who saw the film in Toronto said to me, ‘I started the film not liking Mike, in the middle I felt bad I didn’t like her, and by the end I loved her.’ I thought that was quite good – she brings nuance, Patricia, which is quite difficult. She’s not afraid to be unlikeable.”

One co-star was less well-behaved, however. There’s a scene in the film where a cat stares straight directly into the camera, as if deeply resenting the camera crew’s incursion into its personal space.

Was Carol tempted to fire the cat?

“We did fire the cat!”, she laughs. “There is actually stuff with the cat where it wasn’t looking, so that was a deliberate editorial choice. But there were two cats in the film and I did fire a cat, because it was crap. Not that one, though.”

Carol readily acknowledges that mystery plays a big part in each of her films.

“I suppose Out of Blue, The Falling and Dreams of a Life all circulate around a dead woman. I like missing person stories, but I suppose it’s more about not knowing someone and the brutality of that, and then trying to piece someone together. And The Alcohol Years [her documentary about the five years she lost to drinking as a teenager in Manchester] is that as well, in a different way.

“When someone goes missing, or dies before their time or unexpectedly, I think everyone can become quite drawn to that conundrum, of piecing them together. When I was eleven and my dad killed himself, that was such a shock. And thinking about it, that must have something to do with my interest in this idea of trying to piece things together with whatever you’ve got that remains.”

Another element that links Carol’s films is that each one presents a search for the truth, yet none of them provide a concrete answer.

“I think it’s disrespectful to arrive at a truth, sometimes”, Carol explains. “It’s not like we’re not interested in the truth, but I’m always more interested in authenticity than the truth. Truth is only a version of somebody’s truth – there’s never *a* truth, I don’t think. And I never want to close down a film like that, saying this is the truth.

“I think in that way, people can bring themselves to it a lot more and almost solve it themselves, in the way they need to or want to.”

The mention of Carol’s film The Alcohol Years leads us onto her memories of The Hacienda, which opened in 1982 – the same year Carol left school at 16.

“I remember when it opened”, Carol says, “nobody went at the beginning. It was really empty, but brilliant. It wasn’t a dance club then – it was a huge capacity youth club, in many ways.

“What was amazing about it was the range of people you met. It didn’t feel like youth culture, because you’d get people of all ages – you’d meet someone who was 70 in there. It was people from 15 to 80. And I loved that, because it was just such a mix of people and it felt full of possibility.

“I remember people would come from London and Europe and America and be jealous of it, because what they all did – Tony Wilson and The Factory and New Order – was pretty impressive. So you’d be down in the cocktail bar, the Gay Traitor, and Siouxsie and the Banshees would come in, because they’d played the Apollo.”

“Everyone would gravitate and come in there. I remember meeting Martin Fry in there, Boy George, I remember seeing William Burroughs. You couldn’t really understand him, because the sound system was terrible and he didn’t really enunciate.”

And her worst memories of The Hacienda?

“The worst memory is that it’s closed”, she grins. “I suppose, looking back, which The Alcohol Years touches on, it was quite a boys’ town.

“The women had a lot of fun, but a lot that emerged from out of that time was male – the music, the filmmakers, the people that made videos and stuff. So there was a tendency of the white working class guy to reign. Although Tony Wilson was the mill owner. He was the posh one – well, he’d gone to Cambridge, so it was like, wow.

“I remember the first time I ever saw a filofax, it was Tony Wilson’s. He had this jacket on and it came out and it was enormous.”

Looking back, Carol cites the atmosphere of creativity of The Hacienda as a key influence in her future career.

“The heart of it all, and what everyone spoke about, were ideas. There was a lot of talk about ideas. I mean, you didn’t know what you were going to do with those ideas, or where they were going to go, but I knew I desperately wanted to do something.

“I definitely think it was completely formative, to be around that energy of people of all different ages. It wasn’t just youth – I don’t know how old William Burroughs was at the time, but you’re seeing a legend of the literary scene in your home town.

“I mean, you can’t get better than that.”

Out of Blue is in cinemas across Manchester from 29th March.