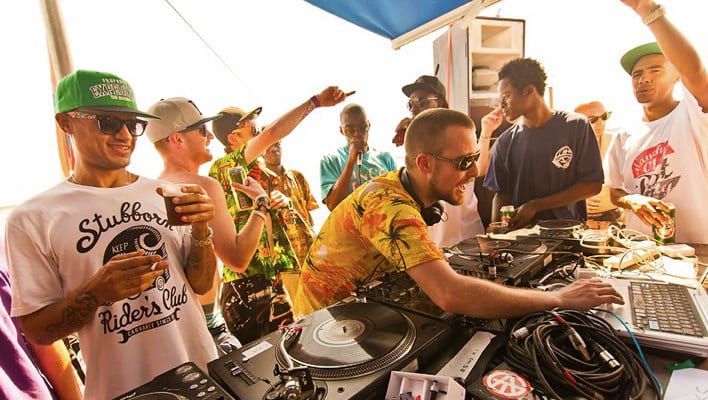 Promoter Rich Reason is bringing students and locals together to party with a purpose this weekend.

Food 4 Thought: Manchester is the world’s first festival which allows you to pay with non-perishable food and toiletries that will go directly to local food banks.

Manchester talents including MC DRS, Chimpo, The Mason Collective, Biome and Children of Zeus’ Konny Kon have taken time out of their busy schedules to perform at the event on Saturday.

And city centre distillery Manchester Three Rivers have also got involved, donating bottles of their gin for performing artists on the day.

We had a chat with organiser Rich Reason to find out what inspired him to put the festival together.

When did you first start getting involved in organising fundraising nights for the community?

The very first night I ever promoted was at uni back in 2002. Yes, I’m that ancient. It was called Tribal Beats and raised money for Link Community Development, a charity that helps develop education in sub-Saharan Africa. I’ve always done charity nights, a lot for Medicins San Frontieres over the years especially, often in response to crises like the Japan tsunami or the Palestinian situation. So I think from the start I’ve always wanted to party with a purpose. Shouts to my Mum and Dad. They have had me fund-raising doing runs, swims and sponsored silences as long as I can remember.

What made you want to set up Food 4 Thought and how has the concept developed since its inception?

None of us can fail to have noticed the exponential increase in homelessness since the Conservatives came to power in 2010. What is shocking is that not only are there more people on the streets, there are many, many more on the cusp of homelessness and hopelessness, despite many having jobs. Or the hidden homeless moving from friend’s couch to friend’s couch for months or years on end. Over 50% of food parcels given out by food banks go to those with jobs.

In sunnier economic times, it was perhaps natural to think more of those suffering abroad. But now we have stark, real, absolute poverty on our doorstep, so I wanted to do something in response to this.

I think people have connected with it due to the novelty of queueing up to get into a club with 4 tins of beans and some pasta rather than the usual ticket or tenner, and seeing the Foodbank staff directly load it into the back of their vans.

Since we started at Antwerp Mansion in 2015 we have done half-a-dozen events in Manchester – 50% Hit & Run and 50% LEVELZ ones.

What was the reaction from people when you approached them to get involved?

Manchester’s musical community has an exceptionally large heart, and without fail those I approach agree to play unless they have a prior commitment. I think the fact that many of the musicians actually struggle a bit in the increasingly tough landscape that is the underground music industry makes them even more empathetic to anyone who struggles to make ends meet. It’s a sad fact that, in general, the richest 20% give 1.3% of their wealth to charity, whilst, slightly more heart-warmingly, the poorest 20% give 3.2% of theirs to those who need it most.

It shows that Manchester’s musicians have great wealth in spirit – the greatest riches of all.

How much have you raised to date and what do you hope to achieve as a result of the weekend’s festival?

We’re waiting for the exact figures back off Foodbank, but I do know it’s tonnes of food and thousands of pounds – especially when you factor in all the other Food 4 Thought events run by our bass music partners across the north west.

I think the amount we raise is somewhat weather dependent if I’m honest. I do know the Foodbank team are very grateful for whatever they do receive as they see the positive impact even the smallest donations make every day.

Where will all the food and proceeds go after Saturday’s festival?

All of it goes to Manchester Central Foodbank, which is run by the Trussell Trust, the UK’s largest food bank network. They run a network of over 400 food banks, giving emergency food and support to people in crisis across the UK, where thirteen million people now live below the poverty line. Last year they gave 1.3m three-day emergency food supplies to people in crisis.

If people want to make an extra financial donation how can they do this?

You can buy a ticket even if you can’t make it or donate directly to The Trussell Trust.

Can we look forward to more Food 4 Thought events in the future?

As long as there’s a need for them, I plan to keep putting them on. There has been one Hit & Run one LEVELZ event per year, and can’t see that changing any time soon. Shout out to my LEVELZ brothers, they are all charitable souls and have played countless Food 4 Thought and other charity events across the north west for nowt time and time again.

Do you think events like Food 4 Thought make people more aware of how they can help local people in need?

I think we’re very blessed that Manchester is a very community-minded city. Hopefully, there is a trend across the city and country that creativity, community and charity can be mixed in entertaining and innovative ways.

My partners in this festival, Love For The Streets, have been doing this exceptionally well since they started last September, and it’s great seeing these students caring so much about the communities where they are living for the three years they are here. Seeing what they do, and with such élan, it was completely natural to ask them to come and do this together.

On a slight tangent, I also think the best nights are always a healthy mix of backgrounds, genders, ages, sexualities etc. So the more we can bring the students and locals together, the better the atmosphere I’ve always found.

Hit & Run and Love For The Streets present Food 4 Thought Festival on Saturday 12th May at 256 Fallowfield, 2pm – 2.30am. A minimum of five non-perishable items (more is always welcome) is required to gain entry.  Or you can buy a ticket.