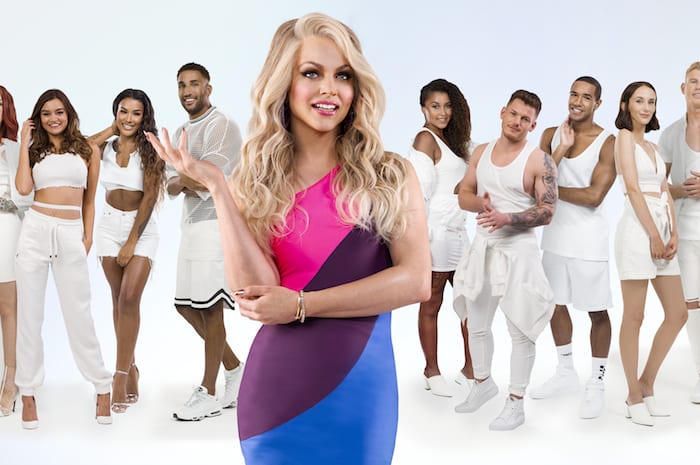 The Bi Life is a ten-part dating series which follows a group of bisexual or questioning British singletons on an adventure to explore their sexuality and find love.

Living together in a villa, the cast help each other navigate the difficult terrain of bisexual dating – while also partying and having fun together along the way.

As a group they support and encourage each other to meet and date new people with the show exploring the highs and lows as they embark on the UK’s first ever bisexual dating show.

With many misconceptions and a lack of understanding about bisexuality, The Bi Life aims to set the record straight – well, you know what I mean.

The Bi Life premieres on 25th October at 9pm on E! Meet the Manchester contestants. 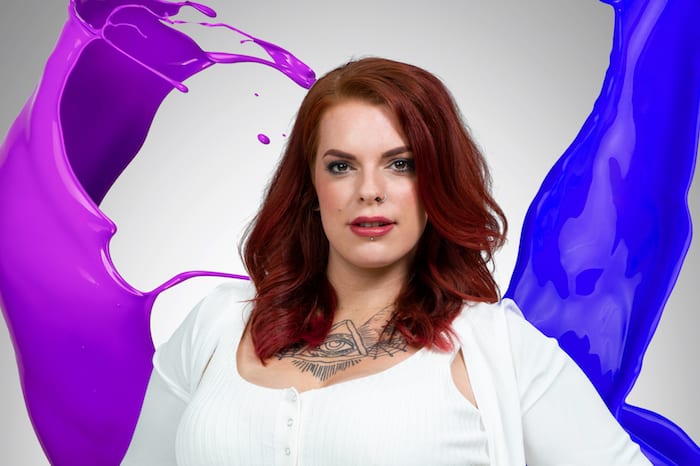 Describing herself as a hopeless romantic, Salford-based Daisie hasn’t been in a relationship for over five years. The adopted Mancunian moved from Nantwich to Manchester eight years ago and is taking part in the show because she’s been hurt in past relationships and wants to let go of the past. “I’m quite comfortable in my sexuality, I’ve always known that I was bisexual, so I wasn’t looking to find out who I am, I was more looking for love.” says Daisie.

“It’s hard being bisexual because we’re really misunderstood. People constantly say that we’re greedy – or ask for threesomes etc. That’s why this show is so good, because it really does educate people on what being bisexual is all about. There’s also non-binary, pansexual etc – there’s actually a pansexual person on the show.”

Talking about the dating scene for bisexuals, Daisie tells us that it can be tough, and she finds especially with guys it’s more of a “smash and dash” when they find out she’s bisexual.

“I’ve dated a lot more men but that’s because it’s hard to date women. How do you know if a feminine girl is attracted to women? Unless you’re in a gay bar you wouldn’t really be able to sell who they’re into – so it’s so very difficult.”

Daisie, who alongside working in fraud prevention is also a part time model – says you never see curvy girls on dating shows and she wanted to change that perception.

“When you watch Love Island or any of the other shows like that, you don’t see someone that’s curvy, they’re always skinny and gym fit. People go through some ridiculous things because of weight and body image, so I think that it’s really important to get the message across that not everybody looks like that – and that’s perfectly normal.”

During the series, Daisie goes on five different dates but is keeping tight-lipped on what happened.

“Meeting everybody and seeing them all grow as people within their sexuality, sharing their coming out stories and other aspects of their lives – that’s definitely been my favourite part. People should tune into the show to educate themselves about bisexuals and to learn that it’s ok to be who you are.”

“If I could do it again, I definitely would – hopefully there will be a season 2!”

“I went on five dates in total. One of them was very difficult and you’ll see that on tonight’s premiere. Lots of tears, lots of laughter and lots of drama – it’s very juicy. Did I find love? You’ll have to tune in to find out.” 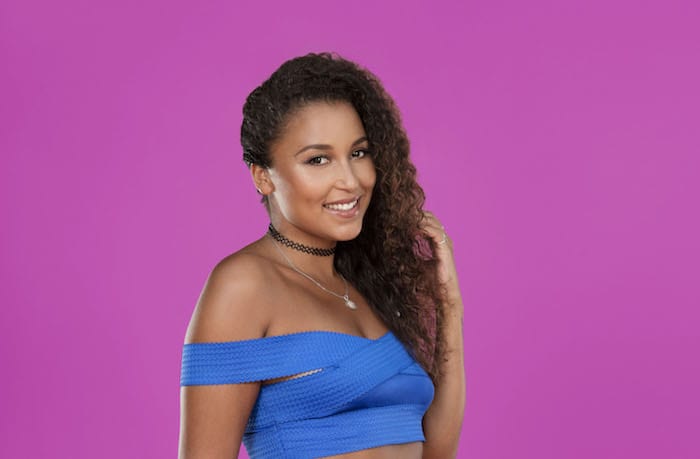 Free spirit Leonnie doesn’t want to rush finding somebody and very much enjoys the party lifestyle, having just got back from working a season in Ibiza.

Describing her love life as unlucky in love, the club promoter often gets bored and is very picky when it comes to relationships – she hasn’t had a relationship for seven years.

“While I was out in Ibiza looking for a new adventure, I came across the advert for The Bi Life, so I decided to apply,” says Leonnie. “I’ve known that I’m bisexual for quite a while, but the majority of my family don’t know that about me. It’s something that I wanted to get more comfortable with and it’s been a long time coming.

“I’m quite an outrageous person, so I don’t think my sexuality would surprise many people. When it first came out in the press that I was part of the show, my family were sending it round to each other, but nobody was really shocked by it to be honest. My mum already knew but my dad didn’t.”

Having lived in Manchester for four years, the self-confessed social butterfly regularly dates guys and girls and admits that instead of having a quiet life she wants a partner who can share wild times with her.

“I’d describe it as a rollercoaster of an experience. Since leaving the show it’s made me a lot more comfortable with being bisexual. When I went into the show I’d say I was 50/50 but now after the show I’d say I’m definitely more towards girls.

“I went in with an open mind, but I wasn’t expecting to find any deep connections. But I did go on some really amazing dates and connect with a few people along the way.”

In touch with her spiritual side, she doesn’t like materialistic people and adds that even when she is rich and famous, you will still find her in the reduced aisle.

“My highlight was becoming so close with the other people on the show – we’re like a big family and have become amazing friends. I feel very proud of myself and my sexuality now and it’s great. It’s going to make history because it’s the first UK bisexual dating show and I’m really excited and happy to be a part of that.” 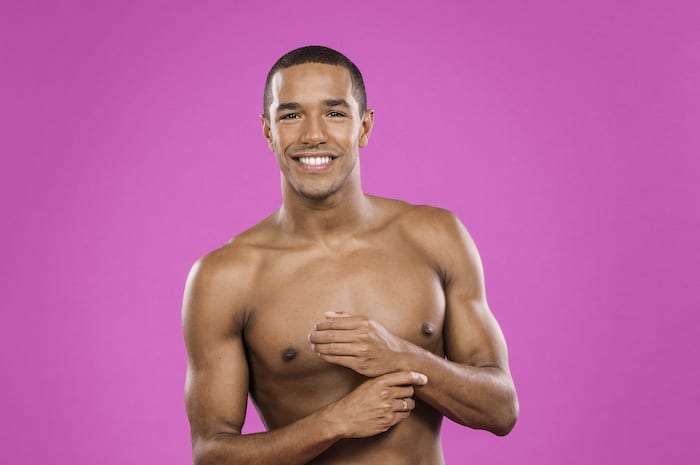 New to the world of dating, Michael has never been on a date before. His commitment to swimming has meant this his dating life has taken a back seat – until now.

Wanting to explore his sexuality, Michael’s main reason for joining the show was to learn more about himself – and he’s most scared of having his heart broken.

“The show appealed to me because of its unique bisexual aspect. I’d never been on a date before, so to be put out in Barcelona, in a friendly environment where you can just be yourself really appealed to me,” says Michael.

“I guess I was looking to both explore my sexuality and also find love. I fantasise over the perfect relationship and meeting someone, but it was mainly to experience the bisexual dating scene because it was all so new to me. And everyone in the villa was so amazing and really supported me.”

The international swimmer has lived in Manchester for around three years. Having competed for Great Britain, he is now part of the Jamaican team and hopes to swim for team Jamaica at the 2020 Olympics.

Talking about his time on the show, Michael tells us that he had a very up and down journey.

“Having never dated before – it’s a rocky road for me. There’s no prize money, we aren’t competing against each other – we’re all in them for our own personal journeys. Growing up I didn’t have any LGBT people in my life that I could look up to, so the show completely opened my eyes to the world of dating and bisexuals giving me a completely new and different perspective on dating.”

Giving us more of an insight into the show’s dynamic, Michael tells us that the contestants don’t actually date each other.

“We don’t date each other on the show – we date outside of the villa. We have an in house app that we can select dates, double dates, blind dates. Obviously there can be attractions in the villa and you can date people in the villa if you want to, but the majority really was sharing the experience with the group inside the villa but dating people outside of it.”

And is Michael glad that he signed up to the show?   “100%. Everybody on the show has their own unique stories and it really is a great series.” 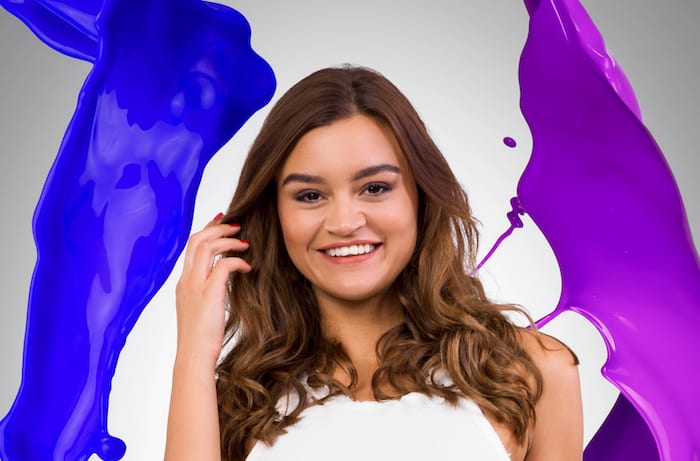 Joining the dating show in Episode 6, Carmen has been a model since the age of 14. She says that being a model, she finds a lot of judgement on her sexuality as people have ideas of what a female model should be – and generally being bisexual doesn’t fit into it.

“Because people have this preconception about models, I found it very difficult to come out. And one of my main reasons for going on the show was to help other people by telling my story to hopefully inspire others that want to come out but are worried that they can’t.” says Carmen.

“I was very open-minded with the show and looking for love. Going in I was questioning whether I am even still attracted to men anymore, so I wanted to go in and explore my options really.”

The Salford-born model who currently lives in Kearsley always knew that she had an attraction to women.

“I dated guys all of my life and about a year and a half ago started dating women through dating apps.”

Carmen’s coming out story is one that is unique. When she came out as bisexual to her family, her mum, dad and sister all came out and said that they were bisexual too.

Telling us about her time on the show, Carmen says she made a few amazing connections and she can’t wait for people to see what happens on the show.

“My first date was a blind date, so I had no idea of the person’s sex or what they looked like so I was really nervous going into that situation, but I was really pleasantly surprised by it.

“The show is so current and fresh, it should have happened a lot sooner. It’s really exciting and everyone has an amazing story to tell. You get to see each other’s stories unfold throughout the series and it’s very endearing.”