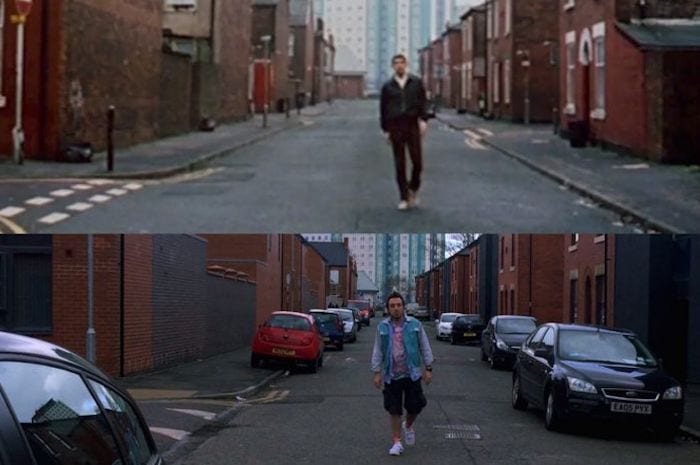 Take one of Manchester’s most iconic films and revisit some of its famous scenes using the original locations, local people, and experimental filming. The result? 24 Hour Party People: Redux.

It’s a retelling of the 2002 comedy drama about the rise and fall of Factory Records which starred Steve Coogan as Tony Wilson.

The redux version was filmed on a shoestring budget using local people and featured as many of the original locations as possible, including Old Granada Studios and outside the Hacienda.

Richard DeDomenici started The Redux Project in 2013. Since then he’s made over 50 films including Cloud Atlas and Jurassic  Park. The remakes have been described as some of the smartest and subversive pieces of film you’ll ever see.

“After being asked by Dave Moutrey from HOME, Tamsin Drury helped me to find nine different locations to use in the 24 Hour Party People: Redux – the most we’ve ever tried to do,” says Richard.

“We tried to film all the bits that are possible to film, though 24 Hour Party People includes a number of locations that no longer exist.

“We shot it all in two days using 30-40 local participants. There was loads of interest and volunteers. Then I had to start thinking about casting. We cast some women in male roles, men in female roles. It’s usual for the Redux Project. We like to mix things up a bit.

“It was exciting to film outside the old Hacienda and create a queue of people pretending to get in. However, it is modern apartments now and we were worried that we may be moved along so we filmed that really quickly and then ran away.  To go in Old Granada Studios was fantastic too.

“It’s been an exciting and lengthy process. I’m involved in it all – from finding the locations to filming it. Kind of directing too even though I have no director training – I’m an enthusiastic amateur, that’s what it’s all about. Involving real normal people is art at its most interesting.

“It’s a long film though and ambitious. Most of my reduxes last about 5 minutes, but at 12 minutes this is the longest. The  previous one was my redux of Superman 4 which came in at 10 minutes and was filmed in Milton Keynes last summer.

“I’d say the process of the redux was actually about 90 per cent research, 9 per cent editing and just 1 per cent filming. All this from something that started out when I was in Bangkok to make a piece of performance art and remade a bit of local film. I redid a Thai romcom and people actually preferred it. Then I tried a redux again in Glasgow and it was still critically well-received.”

The Redux Project has been to Manchester before with Queer As Yolk here last year. Other films with Manchester locations which could receive the redux treatment in the future include the most recent version of Alfie (shot on Soap Street), Captain America (Dale Street) and Sherlock Holmes (Northern Quarter).

Richard is already thinking ahead to his next project in two weeks time – filming a redux of Withnall and I at the original Cumbrian location.

And having averaged 15 reduxes a year so far, he hopes to mark his 80th film with Around the World in 80 Reduxes.

“I’m still trying to work out why people prefer these versions. Through fake versions of fakery – which films are – we may come to a greater truth. It’s become unexpectedly popular, participatory and scaleable too.

“It’s also a way of talking about representation in mainstream cinema. Everyone has a camera in their pocket and it inspires people to create things of their own. I want, hopefully, to inspire a critical mass of people to be active producers rather than passive consumers.”