‘Mancunians get criticised for having a bit of swagger, but wouldn’t you if you were from Manchester?’ 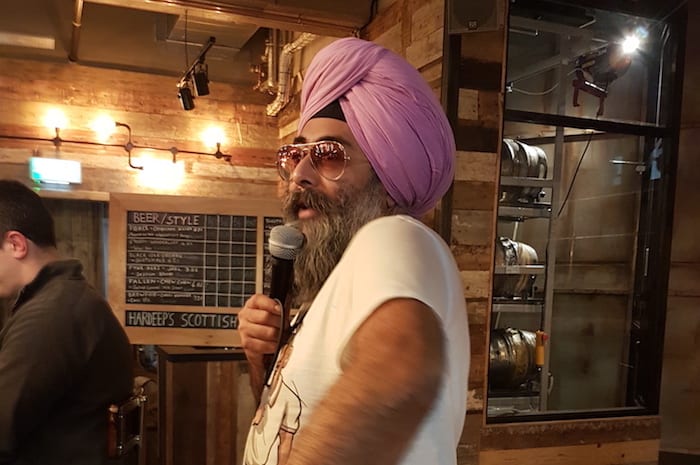 I’m at The Gasworks talking to broadcaster Hardeep Singh Kohli. I’ve managed to catch him before he heads into the kitchen to prepare for a night of his favourite beer and food. So I ask the question. Why Manchester?

I had no interest in going to London. I’d been to London as a kid to see family, and it was shitty the London I saw – Hounslow, Southall, Wembley. I love Glasgow, I love Scotland, but Manchester because I love music and the great football here as well. And the great political history of Manchester means it’s like Glasgow in lots of ways.

I wanted to come to live here and that dream was realised in the early nineties. I came here with the BBC in 92/93 and lived here on Whitworth Street in Granby Village. I think we were amongst the first 20-25 people to live in the city centre in that iteration of Manchester.

There’s something magic about this city, that isn’t an apparent magic. It’s a bit like a beautiful woman or girl that not everyone gets is beautiful, but there’s something about them, and if you invest a little time…

And if you come from a second city like I do, Glasgow is the second city to Edinburgh, there is a little thing of ‘Look at us, look at us, we’re good too.’ Manchester doesn’t do that. Manchester is one of the best kept secrets even from Mancunians. They get criticised for having a bit of swagger about them and stuff, but wouldn’t you if you were from Manchester?

A city is nothing more than its people. I liked the place and came back later in the nineties, working for Granada, and ended up living in Salford – which isn’t the Salford of today, it’s the Salford of twenty years ago. But again, there’s an honesty about this city. If you’re an idiot, they’ll call you and if you’re not, they’ll buy you a pint. Perhaps it’s not as outwardly friendly as Glasgow, but I do like it.

I’ve been coming back here since the BBC was based here, and latterly Media City, but it’s just such an incredible city that has understood how to regenerate.

We’re sitting in The Gasworks and it’s perfect for this part of town. Spinningfields, Castlefield, it’s all been done really well, not in an excessive way, not the way London does things. London f***ing pisses in its own water a little bit. Manchester doesn’t.

At this point, Hardeep’s poetic delivery is interrupted by a sample of the 8 beers on the board. We pause to sample the beers. 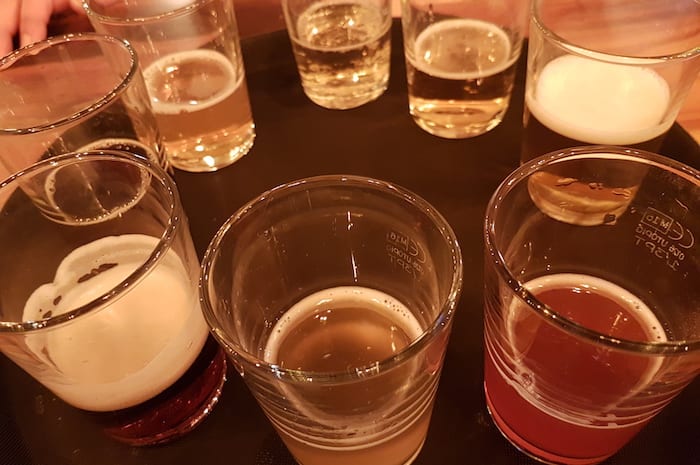 Over in Media City, there’s the The Dockyard. Now, the truth is, when you’ve got a captive audience, as you do in Media City, there are no pubs around. As a punter you look and kind of think, ‘well they’re not going to put on much of an effort are they? They aren’t going to source the finest of the brewing world.’ And then you go in and you think ‘F**k!’

They have astonishing beers. I generally walk into a bar, a good bar, and maybe decide on eight or nine beers I want to narrow down to the three I’m going to have that session. With The Dockyard, it’s like 26, and then the barman moves out of the way and there’s a whole fridge full I hadn’t considered.

And maybe it’s just luck that they’ve got so many of my favourites but maybe it’s also a desire to bring the best to the market. 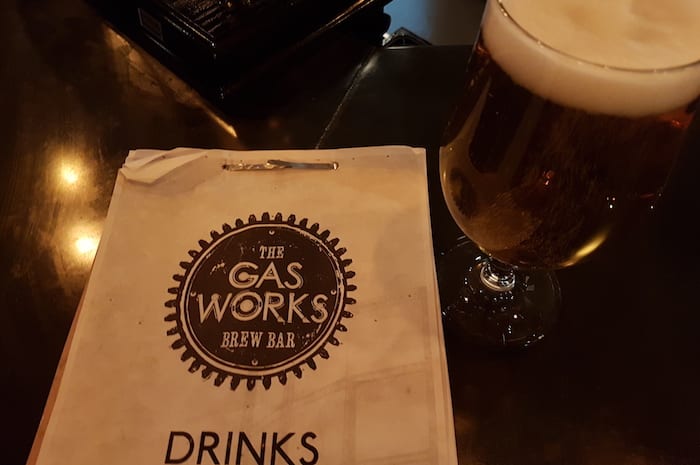 So there’s a young guy behind the bar, and I look at the selection of stouts, and I’d just hosted the Scottish Beer Awards, and Fallen had won an award, and one of my favourites is their Salted Caramel Chew Chew. And I’m speaking to this guy, a young Irish guy and of course stouts come up in conversation very quickly. I say to him you should get a hold of that, and if you have any problems, I know the guys, and that they’d love to be in here, surrounded by these great beers and excellent service and the great food.

That’s the other thing about The Dockyard, the food. These places are like Manchester microcosmically. They’re honest, really hard working, and what they do, they do incredibly well.

Now you could walk by and think that’s just pub food, but you can taste the best buttermilk wings I’ve ever had, really good burgers, great ribs. It’s dirty pub food, but the chef has worked to Michelin standard and everything’s impeccable, so it’s been great to work with him on the pop-up tonight. Anyway, so me and this guy Baz get talking. He didn’t know who I was, I didn’t know who he was. Just two men in a pub talking.

So I tweeted about the experience and he worked out who I was and he thanked me for taking the time to talk and I thanked him for being so amenable. We got on really well, and I said I want to come and do a tap takeover. And you know there’s a Manchester thing where everything is doable.

It’s a little bit like Sir Alex Ferguson. Manchester United didn’t get beaten, they just ran out of time. Everything’s yes here. It’s quite hard to explain, but it’ll get done – everyone’ll have a f***ing moan on the way, but it’ll get done.

Little more than six weeks later, here we are. You’ve just tasted 9 beers, chef is preparing the haggis pakora, I’ve got to go back in the kitchen and finish off the beer for dinner. Things get done here in a way that takes ages to plan in London.

But also the thing about The Gasworks, the thing that I should mention, is that I don’t come to Manchester very often. I come four times a year. I’m in London all the time, but this is the first of a series of pop-ups we’re doing here. We’re taking the existing menu and spicing it up, and eventually we’ll do a seven course tasting paired menu with great beer. It’s a tiny kitchen, but they bang out amazing food. 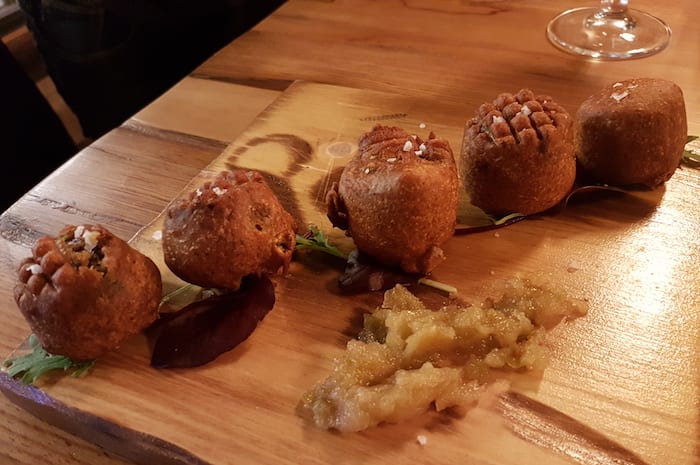 Where did your love of food and beer come from?

I’ve loved food since I was born. Food to me is about family and community coming together. And also in the Sikh religion food is central to worship. So on a Sunday after service, everyone sits together and eats. The richest woman and the poorest man will sit and eat a modest vegetarian meal that’s always delicious.

Food for me has always been central to community, to family and faith. I’m not a particularly religious person, but I think a mutual appreciation of food will bring us together.

There’s an honesty about food. It doesn’t really matter who the f**k you are, the food will talk. The great analogy to strike with that is in an increasingly consumer age, judging people by how they look, you can’t look at someone and know what their relationship with food is. That’s how I get to walk in all the kitchens.

I had an ex-girlfriend once who when we split up – totally amicably – her only complaint was that I spent more time in kitchens in restaurants than I did with her. F**k that, I can take that criticism.

I just think food is a great leveller. It crosses boundaries, political boundaries, religious boundaries. There are no boundaries in food, and that’s what I love about it.

I wasn’t into beer most of my life. About three or four years ago, I went into business, opened my own restaurant in Edinburgh – the first craft beer and curry bar in the world. And all the beers and lagers I’d had before were really gassy and they weren’t about flavour. And then you connect with this brewing concept, this brewing way of life, that has nothing to do with money, it has nothing to do with profit and loss, it’s about passion. How can you not want more of that? How can you not want to support an industry where it’s people following their dreams? Brewers aren’t imagining how much money they’re going to make, they’re imagining the looks of the faces of the men and women who are going to drink it.

It was all about the flavour. It used to be a joke, when I was married, my son would say to me ‘Have you had your second beer of the year yet, Dad?’. Now I’ll have two beers at breakfast. I just think we’re doing what we do brilliantly well in this country, but Scotland pound for pound is the best brewing country in the world, considering what we turn out.

And what we’re seeing is a gender equality in the world of beer – women have three times as many taste receptors as men have and ergo they cannot be excluded. If you exclude women you are excluding a great demographic from your business. They taste more than we do. I don’t give a f**k what gender you are, what colour you are, you can brew me beer.