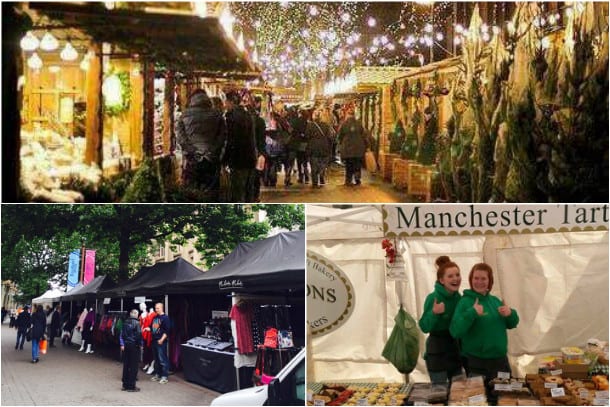 Manchester’s Christmas Markets are back so let the annual scrum for eye-wateringly expensive sausage and not-quite-a-pint of lager begin, says Simon Binns…

And so the annual debate about whether the Christmas Markets are good or bad for business will start to flare among the local food and drink businesses in the city centre – especially those who can see, hear or smell the market stalls outside their window.

The Christmas markets bring people to Manchester from all over the place, in a way that Birmingham’s and Liverpool’s just don’t.

I was in Copenhagen last November, expecting to see Christmas Markets that would rival and possibly dwarf our own, but the reality was that the Danish capital’s festive market offering would have fitted in the main bar of the Albert Square outpost. With plenty of room to spare.

It’s a numbers game isn’t it? According to city centre spokesman and Manchester’s director of Christmas, Pat Karney, the markets bring in around 538 million people and generate the entire annual turnover of Spain during the five or so weeks that they trade.

Some bars and restaurants complain they take customers away. Others, such as new ventures like Quill on King Street, will pick up some passing trade from the stratospheric rise in footfall in pockets of the city centre like King Street. The Corn Exchange will benefit from the markets site at Cathedral Gardens.

It probably evens out. Some would argue that the onus is actually on existing food and drink businesses in the city centre to capitalise on that footfall and lure market customers who might be tired of dropping the best part of £20 on a pint, a deposit for a glass, some hot wine and a deposit for a mug, with some better value offers in surroundings where you are less likely to freeze your tits off, get elbowed by an overexcited surveyor who’s had one too many gluhweins or run over by a pram.

They say a dog isn’t just for Christmas. Neither should our markets be. We need to realise just how great the markets that we have near us all year round actually are.

Some of you may have noticed that Altrincham Market recently picked up an Observer Food Monthly award – richly deserved and confirming what anyone who has been there since former Urban Splasher Nick Johnson and his team took over more than two years ago already knew.

But let’s not forget traditional markets in places like Bury, Levenshulme, Stockport, Ashton and others. Smaller, more artisan makers markets also exist in and around the city centre, including the Northern Quarter and St John’s. Salford Quays has upped its game significantly with food festivals and markets, too.

They are thriving, hopefully because consumers want something different and – especially with food and drink – are more conscious of provenance. Independent food and drink traders and the markets in which they gather are putting the emphasis on quality and authenticity.

Do the Christmas markets in a large city centre like Manchester do that? Sometimes, but a lot of the traders there are more focussed on volume. Make hay while the sun don’t shine, if you will.

So take them as you find them and manage your own expectations about what a market should be based on where and when it trades.

The markets that have landed in our city for the next few weeks are a tourist attraction more than anything else – and a very lucrative one at that.

But they might also convert a few people to the way of the market stall. And given that Greater Manchester has lots to offer on that front all year round, that has to be a good thing. Now, where did I put that plastic pint pot?