Is this Manchester’s most entertaining bus journey?

It’s National Catch the Bus Week. If you travel regularly by bus you’ll know how entertaining it can be. The characters, the conversations, the carrier bags.

Now one of Manchester’s most popular buses has had a play written about it.

The 43 is a new play set entirely on the Stagecoach bus of the same number and its journey from the city centre to Manchester Airport via the University, Rusholme, Fallowfield, Withington, West Didsbury, Northenden, Benchill, Woodhouse Park, and Wythenshawe.

Writers Aiden Ryan and Ben Baxter, co-founders of Salford theatre company Cheeky Peacocks, were inspired by the characters they found on the 43.

The play takes you on a journey into the conversations of assorted Mancunians and features everyone from a bickering old couple to a group of youngsters and long-suffering driver Kev. 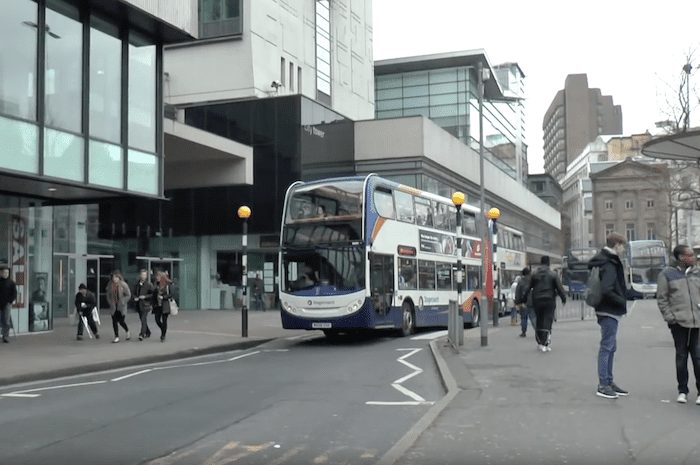 All the characters are played by just three actors – Ben, Calum Scott and Anna Riley.

We spoke to Ben about buses and The 43.

Where did you get the idea from?

Aiden, the co-writer and director, had the idea whilst sat on the bus, noticing so many different stories. Also a source of inspiration was Jim Cartwright’s Two –  a comedy set in a pub with the main characters being bartenders and looking at the different people around them – 14 characters and just 2 actors. We’ve got 16 characters and 3 actors – so the transitions are sure to be funny. The whole point is representing the range of characters in and around the city.

Why the 43 bus in particular?

Ultimately it’s one of the most popular –  starting at the airport to the city centre, it takes in lots of places and areas – Wythenshawe, Fallowfield, Withington – plus picking up students especially in the Rusholme area, so you get a real variety of people.

What can people expect from the production?

Expect a good warm hearty comedy that really represents Manchester, lots of different characters and themes, including romance and drama. In terms of themes, there’s a couple who represent the old people who bicker at the front of the bus, then there’s the youths at the back MCing. A funny one too is a guy on his way to the X Factor auditions. He loves Take That but can’t sing.

That’s the thing about this play and the impact of buses. It helps highlight all the amazing things that happen in the city from big events like concerts to small personal moments. Take the boy who likes a girl but never gets the chance to talk to her at college. His only opportunity is on the bus.

Lots of other things are reflected on too. There’s a character who talks about Manchester and compares it to the city in the 80s, including areas like the Northern Quarter.

What we want the audience to take away – and using the setting of a bus we can get away with anything, so many themes and personalities –  is, no matter what age you are, come along as there will something for you to love – and most of all you will love Manchester.

Why should people appreciate buses rather than take them for granted?

Buses have been going for over 200 years now and are a big part of British culture. I also suppose one of the biggest themes in the play is that the bus driver is worried that trams are taking over, and it is the competition amongst public transport which is worth thinking about. Buses are a staple of society and have their own culture. Everyone has ‘their’ bus don’t they, in a way?

Name one of the weirdest experiences you have had on a Manchester bus?

This one experience was weird in a funny way rather than a really weird way. A woman was sitting next to me on the phone. She kept answering then she’d put the phone down and it would ring again. Every time she would wind down the conversation – and bear in mind the full bus could hear – she’d say “bye, bye, bye, bye” about ten times in a really loud way.

Whats your favourite place to catch a bus in Manchester?

I used to get the bus from Chapel Street a lot, but I have to say one my favourite places is Piccadilly Gardens. If you look out at the gardens, you see the real variety of people who make up Manchester.  This is a multi-cultural and interesting city.

Catch a 43 bus at Piccadilly Gardens 24 hours a day, every ten minutes or better at peak times.