Godspell is one of the lesser known musicals of yesteryear. It’s based on stories in the Gospel of Matthew but is nowhere near as well-known as Jesus Christ Superstar, which has spawned thousands of productions and its own reality TV show.

However, it has a broader musical range than Superstar, from pop to classic vaudeville, and a score which has been described as ‘poignant and beautiful’ by those who have heard it.

The show has finally risen from its tomb thanks to students from the University of Manchester Musical Theatre Society who will be performing it at this year’s Edinburgh Fringe Festival.

The team is made up of over twenty young theatre and music makers who have been working on the project for over ten months.

Their hard work seems to have paid off.  After a sell-out run in November, Godspell was nominated for four National Operatic and Dramatic Association Awards. 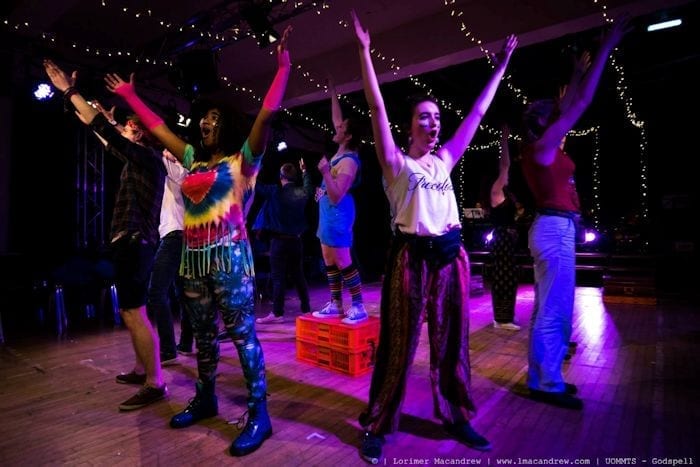 The production was originally a traditional one. Performed in the imposing council chambers above the university, the stage was against the back wall, meaning the audience could only watch from one side.

However, the creative team decided to switch to a theatre in the round style, performing the show right in the centre of the audience.

Though this creates a more intimate, engaging atmosphere, it’s also famously difficult to perform as the audience can see every mistake an actor makes. For a show that usually requires ten people to remain onstage for the entire show – eleven in this production – that could be a huge risk.

“What is so special about the script is that Godspell is a musical that relies on a strong ensemble and also allows every performer to have their moment in the spotlight,” director Maddie Brooks told us.

“At the start of the rehearsal period, there was a challenge ensuring that every actor knew exactly what they were doing every second of their time onstage. But once we got past the initial blocking, it has been such a fantastic experience working on such a collaborative piece.” 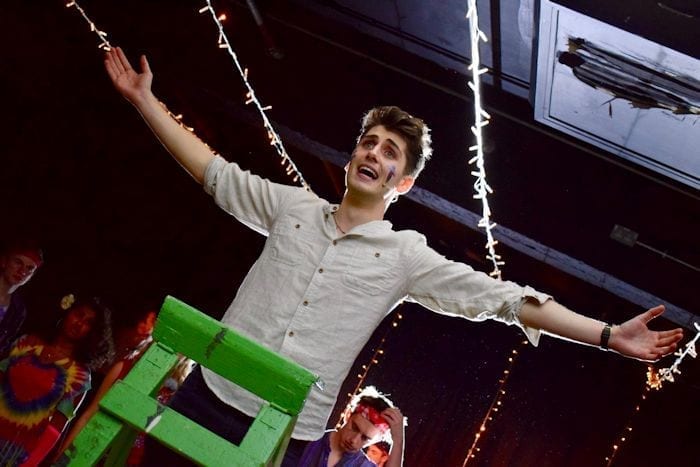 The team also experienced problems with funding. Although the props are minimal – and often self-made – equipment and venue costs almost stopped the production cold.

“Raising the money to fund it has been the hardest thing.  Even though the set is literally four crates which we’re borrowing from Rev’s in Fallowfield, and costumes are just things that the cast would wear if they went to a festival, you still need so much money to simply pay for the venue, rights and microphones.  We’ve relied on the kindness of everyone who has donated.”

Marina Jenkins, head of the University’s Drama Society, explained how the festival could open doors to Manchester’s students.

“As students we normally perform to our peers and lecturers,” she told me, “but going up to Edinburgh will widen our audience to people from all generations and from across the world.”

You don’t need to be religious to enjoy the show. Although based loosely on Christian parables, the story mainly focuses on the themes of right, wrong, kindness and tolerance.

Expect spectacle, energy and colour, incredible voices and a ridiculously funky onstage band. Godspell is for anyone who wants to leave a theatre feeling like they’ve been on a theatrical journey of a festival-themed musical extravaganza.

So if you’re going to the Edinburgh Fringe and looking for a couple of hours of laughter, music, faultless harmonies and an uplifting storyline, then Godspell could be the show for you.