Manchester set to become the UK capital of beer (and cider)

Manchester Beer and Cider Festival is back again this month featuring beers from over 100 breweries, a huge selection of foreign beers, and one of the largest selections of cider and perry ever assembled.

The festival, which has become an essential entry in most beer and cider lovers’ diaries, will this year offer 30% more floorspace – and more seating – than ever before.

There will be a record number of brewery bars where festival goers will have the chance to meet brewers, talk all things beer – and drink it, too. Of the 13 breweries showcasing their beers, more than half are local, reflecting Greater Manchester’s position in the brewing industry.

The selection will include championship winners, traditional favourites, key-keg conditioned and some new beers never seen before.

Local breweries exhibiting include favourites like Marble Beers, instrumental in putting Manchester on the brewing map for the last two decades, Blackjack Beers and Runaway Brewery, as well as less well known breweries. Brewsmith, an award-winning 10-barrel family microbrewery from Ramsbottom will be launching Galaxy, a new beer, at the festival. Wildside, a new local entrant, will be at Manchester Central with a range of beers which promise some intriguing and unusual flavours, as will Outstanding Beers, whose beer attracts discerning drinkers wherever it is served. 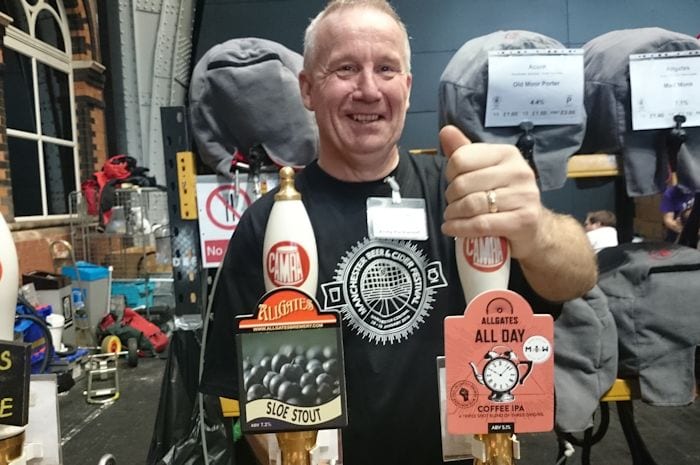 If you’re a fan of proper cider rather than the carbonated, pasteurised dreck which fills the shelves in most supermarkets and too many bars, there will be lots to choose from, including the greatest selection of northern ciders on sale anywhere – and seven made in Greater Manchester.

Among the treats in store are the current national silver medal holders Dunkerton’s cider from Herefordshire at 7% ABV. Many ciders are considerably stronger than ales, with Green Valley’s Rum Tiddly Tum from Devon eclipsing this at 7.5%.

If you’re popping in for a quick lunchtime drink, less alcoholic fruit ciders will also be available including Celtic Marches’ Raspberry from Bishops Frome and Hogan’s Elderflower from Warwickshire (both 4%) . Making a welcome return to the festival is the national gold medalist Two Trees Perry from Gwynt Y Ddraig in Pontypridd, Glamorgan.

Cider bar manager Mike Robinson said: “Our perrys are a world away from the dubiously-named ‘pear ciders’ you may see on supermarket shelves. I’d encourage all festival goers to sample the excellent examples and maybe we’ll convert a few ale aficionados to apples and pears!”