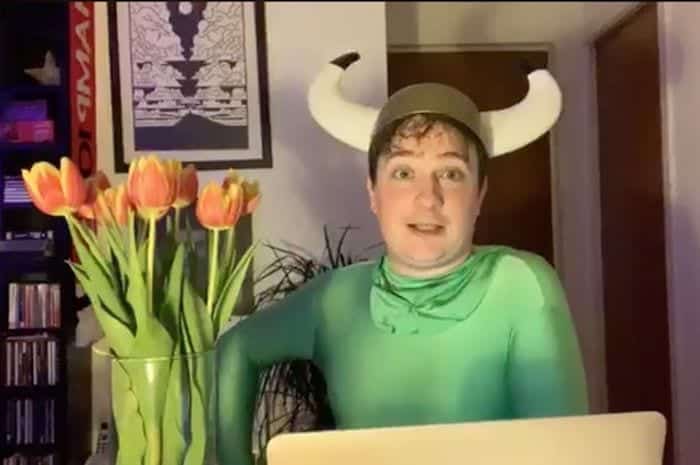 Facing quarantine boredom, one Manchester pub quiz host is bringing some much-needed cheer to us all as we self-isolate in the midst of the coronavirus pandemic.

Daniel Savage usually runs The Quiz That Came From Space at the Deaf Institute, something he has been doing every month for the past two and a half years.

His next was due to take place this Tuesday 17th but, due to the Deaf Institute closing its doors amid new government advice urging us all to adopt social distancing practices, for a moment it didn’t look like it was going to happen.

So, feeling a little glum and frustrated in quarantine, he took it online instead – hosting the quiz through Facebook Live in the hopes of alleviating his own boredom and entertaining his friends.

Donning a green alien suit and a horned Viking helmet, in the first video released this week he invited his Facebook friends to grab a paper and pen and get involved in what he’s calling ‘The Quiz That Came From Quarantine.’

“I was expecting maybe ten of my friends to join in […] but people seem to love quizzing,” Daniel tells us.

“The quiz at Deaf been going two and a half years now, just once a month – it’s been decent, a few regulars every month. Weirdly, this is more successful.

“I’ve switched it up a bit. The rounds are the same, the one at Deaf is a bit longer […] but I have worn that alien costume live before. It’s mainly just an excuse to ramble on and have a few pints and ask people questions. It’s translated really well to being online.”

Since going live on Tuesday he’s been inundated with requests from people messaging and asking if their friends can join in, too.

So he’s made a dedicated Facebook page, appropriately called The Quarantine Show, so that anyone can watch and take part in the new weekly Tuesday quizzes.

He’s also going to begin hosting Friday evening streams “for people who are bored, miss the pub, and want to talk.”

Starting tonight from 7.30pm, he tells us the Friday sessions will be “less of a quiz, more of a Friday night hang out and chat.

“I’ve set up a phone number so people can phone in, almost like having a call-in show.  Just worked out the technology yesterday.

“I’m working on a game called ‘What’s in the box?’, where people can phone in and ask three questions where I’ll say yes or no. After three they’ll get to guess.

“I don’t know how it will translate through live stream, but people liked Deal or no Deal and that’s just opening boxes,” he adds.

He’s even gone so far as to set up a quarantine hotline which for now just sounds like it’s engaged but, when the show goes live tonight, will put people on hold in a queue for him to bring online as and when.

“Hopefully we can get some interesting stories, see how people are coping in isolation, dealing with kids back home, chats from friends who are doctors or teachers, but it’s mainly about having fun and ignoring the real world for an hour or two.”

As well as hosting his pub quiz, Daniel normally DJs on Fridays at the Deaf Institute, but with the venue shut has been spending a lot more time at home. He also works for a charity part-time which he is continuing to do remotely.

“I work for a charity part-time, as well. I’m fortunate in that regard that I can use this time to do other things and hopefully entertain the rest as bored as I am.”

Telling us he plans to stay in the flat for the foreseeable, he adds lightheartedly: “I can’t really help on the front line of things […] the best I can do is be silly for other people.

“What I expected to be a bit silly in front of my friends in my flat […] has become a different beast, but it’s exciting.”

Tune into The Quarantine Show from 7.30pm tonight, and put a note in your diary to check out the next quiz on Tuesday.