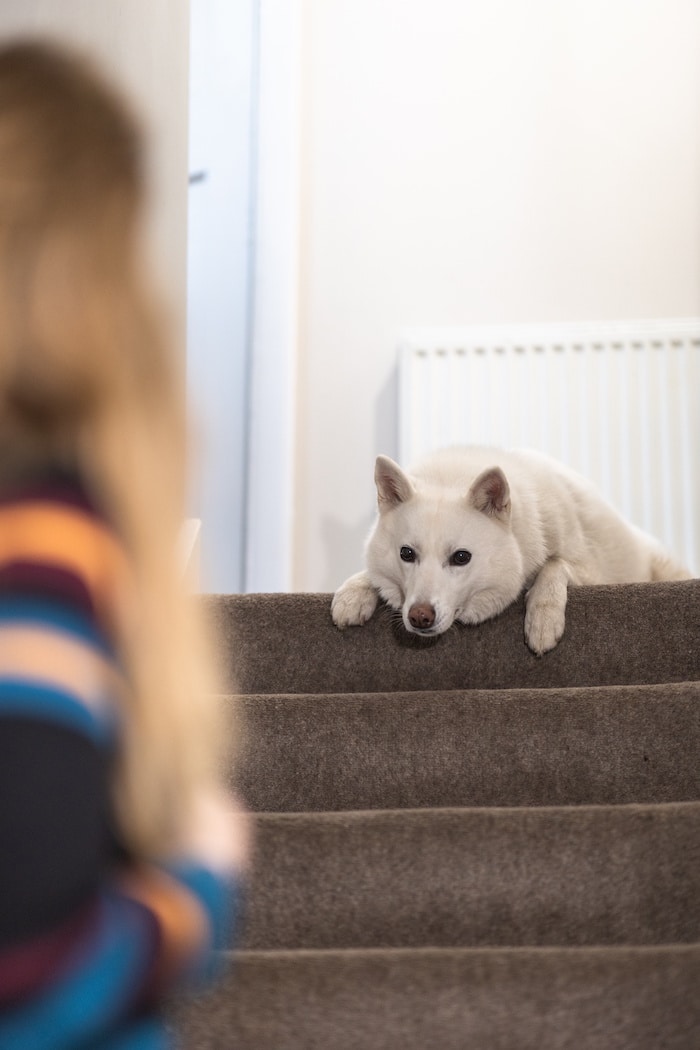 Siberian Husky Zoe sniffed out the first floor of a holiday apartment she visited in Ashton with her owners but then refused to walk back down the stairs.

Ashleigh Hargrave and her husband Paul, both 51, tried to coax her down with treats but she refused to budge.

When she was still stranded the following morning, the couple were forced to call for help over fears that making Zoe move might make her more distressed.

Ashleigh said: “We first realised that she was scared to come down the stairs when we were getting ready to take her for her evening walk. She was too scared to go back down and treats and coaxing just weren’t working.

“Zoe was really agitated and we were afraid she would lash out and bite, the stairs were open and steep, so we didn’t want to try and carry her, especially in the distressed state she was in as it could have caused an accident.

“She wouldn’t accept any attempts to try and move her, and it was clear that she was staying put, and was too scared to move a muscle.”

Ashleigh, a university programme manager from Coventry, West Mids, called a local vet who referred her to pet behaviorist Rachel Bean who is from Manchester.

Rachel is also the Manchester co-ordinator for Street Paws, who help provide veterinary treatment for Manchester’s homeless community for free.

Rachel raced to the holiday home in Ashton Under Lyne, where she used a special ‘confident handling’ behavioural technique, which empowered Zoe to climb down the stairs herself after hours of fear and upset.

Ashleigh, who has cared for Zoe for 18 months after adopting her from the charity Suki’s Canine Rescue, added: “When Rachel came it all ended really quickly and for Zoe it was like nothing had ever happened.

“Rachel went up to the top of the stairs and used a technique that she has used on street dogs in Thailand, which allowed Zoe to focus on moving forward, but coming down at her own pace.

“It was a massive relief because Zoe had been really scared until that point, and we were really worried because she hadn’t been able to go out since the night before. It is horrible to see your dog in a situation like that, but Rachel was wonderful.”

Before being adopted by Ashleigh and Paul, Zoe had been an outside dog, and had not been exposed to different situations as a young pup.

Canine behaviourist and qualified veterinary nurse Rachel Bean, 52, who lives in nearby Grotton, Greater Manchester, said: “Poor Zoe had a complete mental block, and the key was to get her to move forward gently, and do the descent eventually by herself.

“I have worked with dogs in situations like this before, and it’s always scary for both the dog and the owners, as all the usual things that they use to help their dog relax don’t work.”

It was lucky that the incident happened where it did. As Rachel is one of the UK’s leading behaviourists, and wrote the iPET Network’s qualification in canine first aid.

Ashleigh added: “Zoe recovered from it straight away, she went out for a big walk later that day and it was like it never happened.

“But the next time we are booking somewhere to stay we will definitely make sure there are no spiral staircases.”