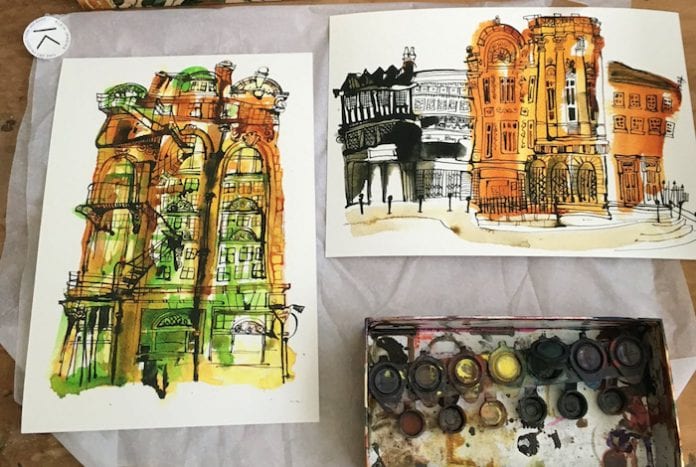 Andrea Joseph is a self-taught illustrator who both lives and works in Manchester. Originally from south Wales, her mother had roots here and as a young child Andrea would spend her holidays with family in Wythenshawe.

She began drawing 12 years ago and is now a self-confessed drawing obsessive, working as a professional illustrator. She also draws the city’s architecture and altering skylines with and without her partner, Salford-based artist David Lowther; draws people in their Sunday best once a month at Stockport Vintage Village; draws in prison where she is a visual note-taker; runs drawing workshops with charities and women’s groups across the city; and as part of the Urban Sketchers drawing group.  That’s an awful lot of drawing.

Andrea is most influenced by the city’s architecture and its people, and that’s what she likes to draw. Her sketches are drawn as quickly as possible – sometimes in the cold, sometimes in the rain, but more often than not in a warm café with a coffee.

Let’s take a stroll through the city with some of our favourite sketches.

Peveril Of The Peak 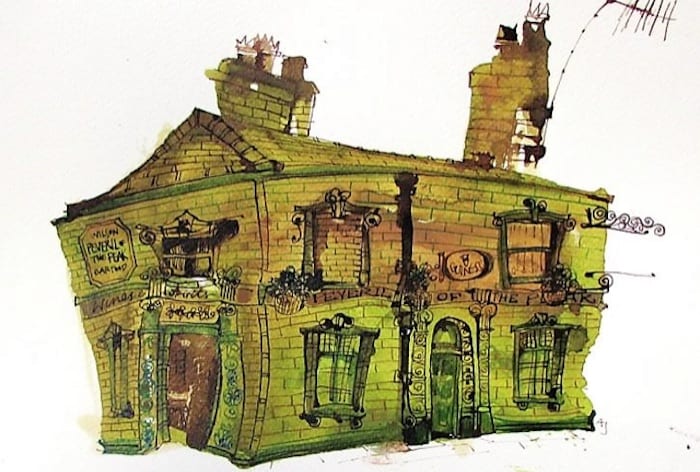 Andrea loves to draw the old pubs with character that still trade in our city today. This has to be one of the prettiest of the lot. With its green and yellow tiled exterior, this Grade II listed Victorian building is instantly recognisable and remains a popular local for all ages with decent beer, games and music throughout the week. 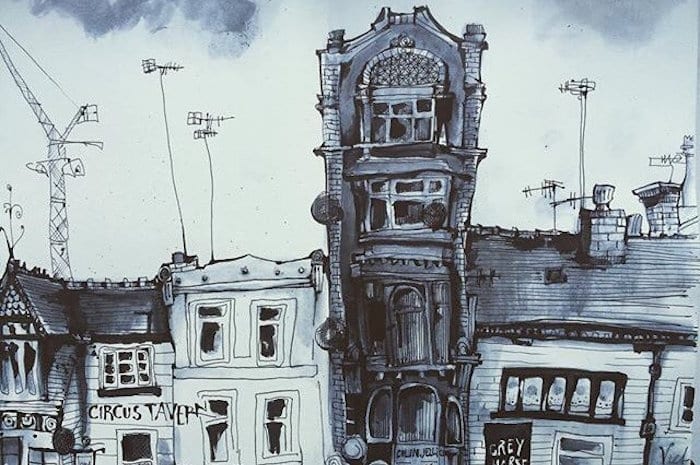 In Andrea’s own words: “I absolutely love this building that was once home to Colin Jellicoe’s Gallery (a Manchester artist who became director of his own gallery). It looks so precarious. I fear for this lovely old building’s future as I’ve watched and drawn the demolition of so many beautiful buildings here. I hope she can survive.” 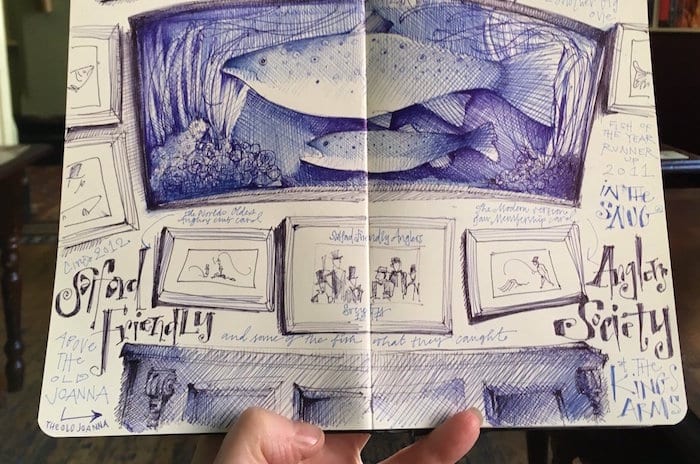 Another pub. We’re beginning to see a bit of a pattern here – but they are some of the most interesting places, we have to agree. What we love about this sketch is that although The Kings Arms is another fine looking building, it actually focuses on the details – the bits that make up the character of a place. Drawn in biro, it captures the quirkiness of this arts- based venue still thriving in an area that has seen many changes over the years. 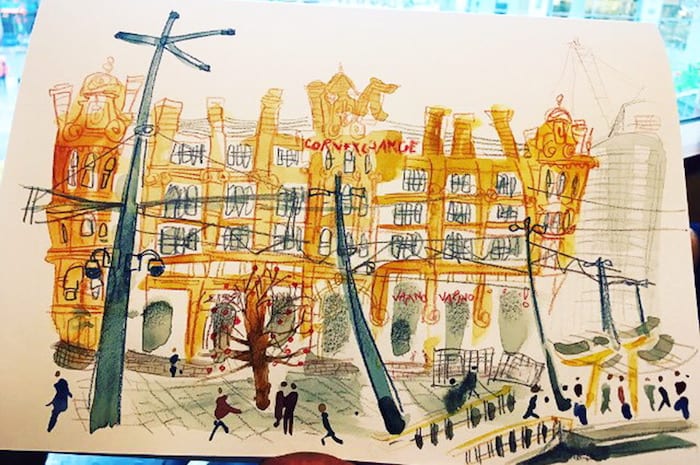 Another building that has been through multi-uses and change, especially in the last 20 years. The building was originally used as a corn exchange, but by the end of the Second World War trade had declined so much the building fell into disuse. The mid-eighties saw the building play host to an alternative market, and renovated as a modern shopping centre and re-named The Triangle following the 1996 IRA bomb.  In its latest iteration, the building was re-launched as a dining destination and given back its old name. Drawn on a wintry day, the view is from upstairs in Starbucks giving the impression of people ice-skating through Exchange Square. 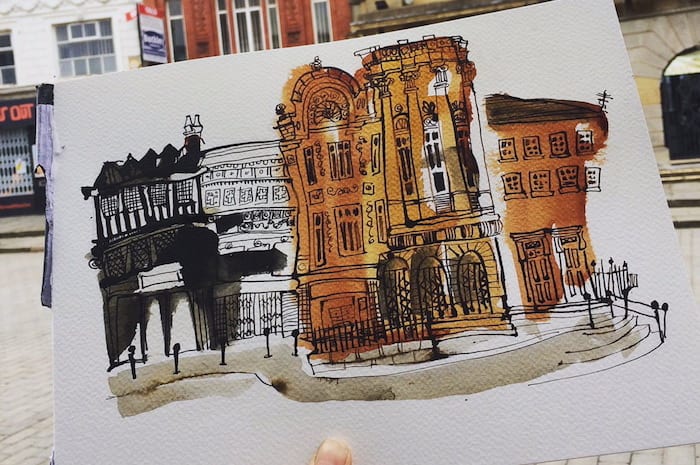 Andrea is based at Stockport marketplace for the vintage market every month. She will pitch up with her pens, pencils and paints and create quick-fire portraits of the shoppers. Each one takes fifteen minutes and it’s a chance for her to hear peoples fascinating, and often surprising stories. 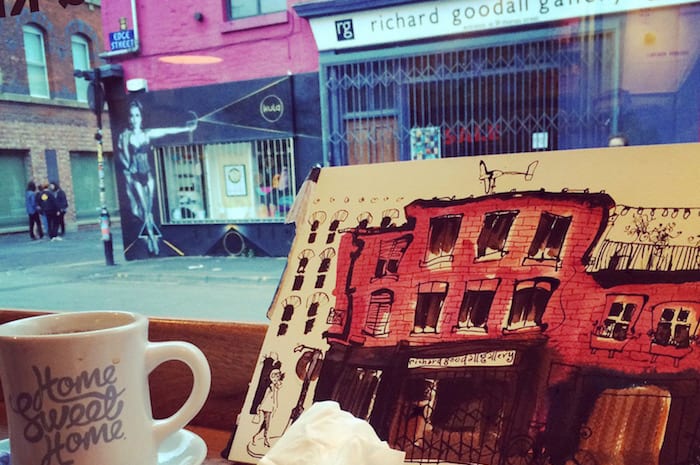 Drawn from the warmth of Home Sweet Home, this ink drawing of Richard Goodall Gallery perfectly represents the vibrancy of the Northern Quarter where Andrea originally began documenting the area’s demolition and re-development. Her Instagram account is aptly called @northernquartersketcher 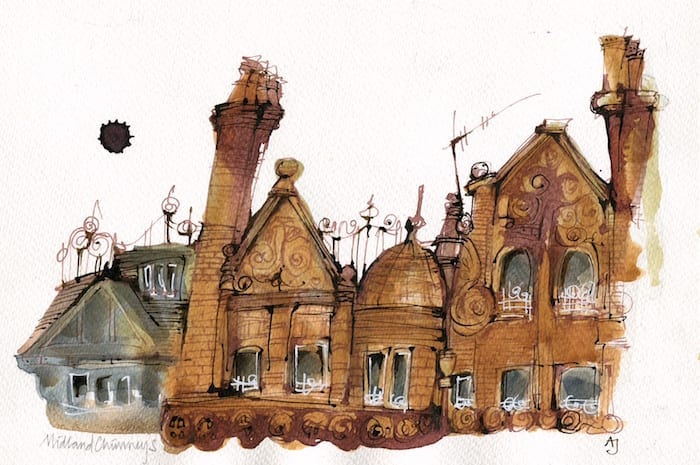 One of our most iconic landmarks, this grand Edwardian hotel designed by Charles Trubshaw opened in 1903. The impressive Grade II listed building is often depicted by artists, but not often from this view across the chimneys from Central Library.

Drinker in The Marble Arch 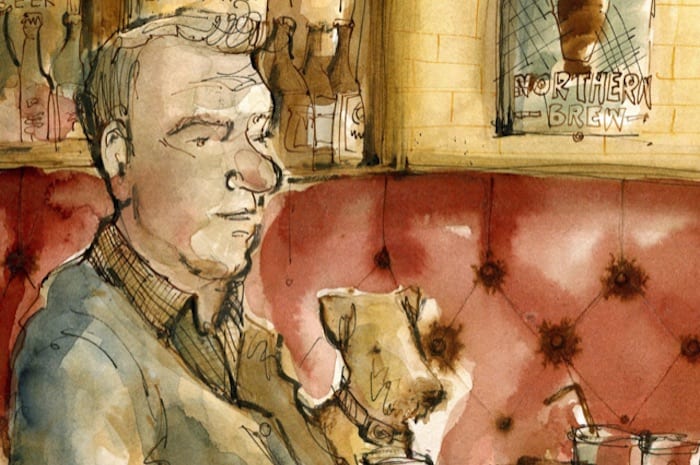 Andrea is also a portrait artist. Here we see her love of buildings and people brought together in a picture drawn in The Marble Arch on Rochdale Road, where she says she “has to be a lot more sneaky” – and quick, perhaps – to capture them both.

You can see more of Andrea’s sketches at the exhibition Two Point Perspective at the Stockport War Memorial Art Gallery until October 2nd, featuring iconic buildings drawn by both Andrea and her partner, David Lowther. Find her portfolio of drawings on Instagram @northernquartersketcher. 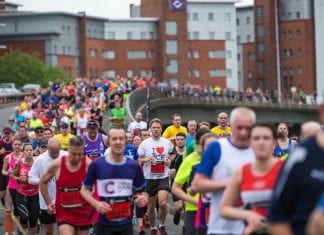