Manchester Histories Festival – celebrating the past and illuminating the present 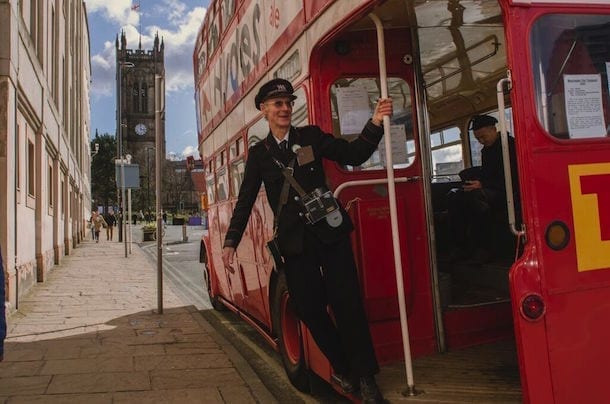 If you’re after playing online games, a queer review, sharing ordinary people’s stories from diverse communities, being part of making tomorrow’s histories, exploring reggae in the city, discussing the issue of homelessness now and then, walking tours, bike tours, running tours, or listening to an artist’s historical soundscape, there’s something for you at this year’s Manchester Histories Festival.

With ten days of music, film, debate, a digital game, talks, theatre and performance, tours, exhibitions and more, the festival celebrates the familiar and reveals new and hidden histories from across Greater Manchester.

There are more than 180 events and activities to choose from, many of them free, so there’s something for everyone, history fan or not. Here’s just a taste of what to expect.

The Battle for the Ballot

Singer-songwriter Quiet Loner tells the story of how working people came to have a vote. Using original songs alongside images this show crosses the centuries to show how the right to vote was won. Beginning in the Industrial Revolution the story will take in events like the Peterloo Massacre and introduce the people – Chartists, politicians and Suffragettes – who fought for the ideal of ‘Universal Suffrage’. Matt Hill aka Quiet Loner is the People’s History Museum Songwriter in Residence for 2016. 2-3pm Saturday 4 June. People’s History Museum, Left Bank, Spinningfields M3 3ER. FREE / BOOKING RECOMMENDED

Screening of fascinating and rarely seen documentary and private film footage that tells the journeys of Irish people between Ireland and Manchester from the 1930s to the 1980s. Drawn from the collections of the Northwest Film Archive at MMU, this collection of short films from a variety of sources, offers a unique view into the history, heritage, landscapes and social life of Ireland and the Irish, at work and at play, in the mid-twentieth century. 6:30pm Sunday 5 June. Irish World Heritage Centre, 1 Irish Town Way, Cheetham M8 0RY. £3 / £1.50 12+ / BOOKING RECOMMENDED

Stick your oar in

As part of Minecrafting in Salford, an ambitious new project which is inviting men living in communities along the Bridgewater Canal to utilise their skills and creativity to build a ‘Starvationer’ boat, like those once used in the Duke of Bridgewater’s coal mines that led to the development of the canal back in 1761. The project was developed by Salford City Council’s regeneration team in response to research that found that isolation and loneliness is more common in the UK in older men than women. The group are now inviting anyone wanting to be part of this project to this companion workshop. Participants will spend the day learning wood-crafting skills and making a paddle which they can take away with them. All levels of experience welcome. 10am- 3pm Wednesday 8 June. Duke’s Drive Country Park, off Parrin Lane, Monton, Salford M30 8AP. FREE / BOOKING ESSENTIAL

An Audience with FA Cup Heroes

Born 10 April 1918 in Bury, lifelong activist Betty Tebbs has worked tirelessly for women’s rights, worker’s rights and the campaign for peace. In the early 1950s she successfully led women in the first ever strike for equal pay. She spent 17 years creating a trade union that fought for equal rights across the board. She has been involved in international peace negotiations, she was the President of the National Assembly for Women, and has been banned from America. When she was 89 she was arrested for her anti-Trident protests and at 98 continues to campaign. Join Betty and a special guest presenter to talk about her extraordinary life. 6-9pm Thursday 9 June. People’s History Museum, Left Bank, Spinningfields M3 3ER. FREE / BOOKING RECOMMENDED

Edgar Wood: Middleton Architect Guided Walk Edgar Wood was an architect, artist and draftsman who practised from Manchester at the turn of the 20th century and was regarded as a proponent of the Arts and Crafts movement. He designed over twenty buildings that survive today in Middleton, including the spectacular Arts & Crafts Church (Long Street Methodist) and several grand homes along Rochdale Road. People are rediscovering the genius of Wood and Middleton is uniquely placed as a living museum of his work. 12 noon Sunday 12 June. Starting Outside Middleton Post Office, 53 Manchester New Road, Middleton M24 1SQ. £8 + £1 booking fee / BOOKING ESSENTIAL

Manchester Ballads In the 19th century, the news was presented as single sheets of paper printed with a ballad to be sung of the day’s happenings. Manchester was one of the most important centres for the production of this cheaply produced street literature which was sold to ordinary people in the city streets, and Chetham’s Library holds a large collection of these printed ballads. For MHF Band on the Wall is hosting a day of performances, films, exhibitions and talks, featuring social archaeologist David Jennings; producer of Edward II’s Manchester’s Improving Daily, Gavin Sharp; pre-eminent broadside balladress Jennifer Reid; folk singer’s Mark Dowding and Chris Pollington; and The Fosbrooks. A day for all ages. 1pm-5:30pm Sunday 12 June. Band on the Wall, 25 Swan St M4 5JZ. FREE/ BOOKING RECOMMENDED

MHF Celebration Day Bringing together nearly 100 histories and heritage organisations from across Greater Manchester including Back on Track, Greater Manchester Fire Service Museum, Gallery Oldham, Jodrell Bank, the Ramblers, the Royal National Lifeboat Institute, Royal Northern College of Music, Wood Street Mission, amongst many more. With exhibition stands, games, heritage bus rides, craft activities, film screenings, performances and talks, there will be something for all the family, plus it provides a perfect opportunity to find out how to get involved with these organisations that celebrate, preserve and explore Greater Manchester’s past. 10:30-4pm Saturday 11 June. Manchester Town Hall, Albert Square M60 2LA & Central Library, St Peter’s Square M2 5PD. FREE / DROP-IN [TALKS / BOOKING RECOMMENDED]

The full festival programme is now available online at manchesterhistories.co.uk