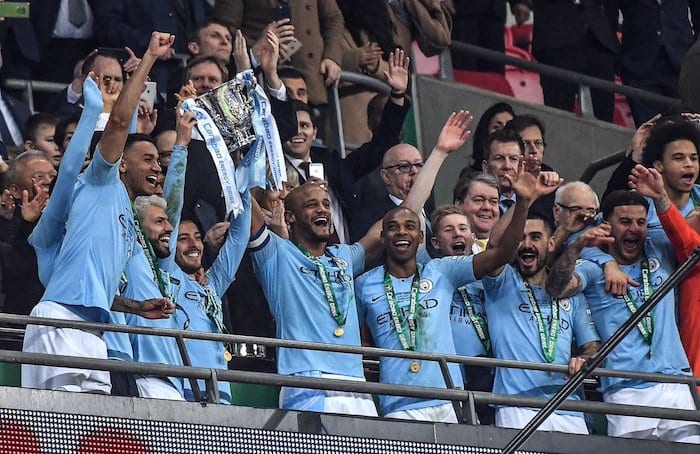 A stunning weekend of sunshine with temperatures twice the average for this time of year saw Manchester City produce two historic cup results in both the men’s and women’s games.

On Saturday, the women’s team beat Arsenal on penalties to lift the Continental Cup thanks to the heroics of goalkeeper Karen Bardsley.

Yesterday’s Wembley Carabao Cup showdown against Chelsea was also decided by a penalty shoot-out with Raheem Sterling stepping up to score the decisive penalty into the roof of the net via the underside of the crossbar.

It was fitting that Sterling be the one to settle the shoot-out – currently in the form of his life he has recently enjoyed some rare praise from the English media.

Wow nice headlines….. gonna make a screenshot of these cause it might not happen soon again 😅😅 https://t.co/ark369UeZ5

Although colleague and friend Leroy Sane had given him confidence prior to the penalty kick Sterling confirmed the manager told him afterwards he hadn’t watched.

“It’s a great feeling. I’m home, I’m at Wembley, in my city,” Sterling told Sky Sports. “It was a tough game but an amazing feeling. The boys were brilliant today.

“I spoke to Leroy (before the penalty) and he said make sure that if I scored it was the winner. That was all the confidence I needed. Pep said he didn’t watch it – he said where did it go? I just told him ‘top bins’.

“It’s one trophy down and now we just need to keep winning games and that’s it.”

The victory meant that manager Pep Guardiola and his players managed to retain a major trophy for the first time in the club’s history.

Half-time saw City forced into their first substitution with Aymeric Laporte suffering a hamstring injury which gave Vincent Kompany the opportunity to step in and make some history of his own.

The first piece of silverware of the season it may be but it was the sixth time they had lifted the trophy and Kompany’s fourth time as skipper – overtaking John Terry and Graeme Souness.

The penalty shoot-out very nearly took an interesting turn during the late stages of extra-time when Chelsea keeper Kepa Arrizabalaga appeared to suffer cramp twice in quick succession leading to manager Maurizio Sarri to signal the substitution of the keeper.

Chelsea had former Manchester City stopper Willy Caballero on the bench ready to come on against his former club, but Kepa appeared to refuse to leave the field – much to City fans’ relief. They are all too aware of the exploits of Caballero in League Cup penalty shoot-outs. In 2016, he saved three against Liverpool in the final to secure a City victory.

With the first piece of silverware now secured, conversation quickly returned to whether or not the Blues could do what Kevin De Bruyne earlier in the week described as ‘almost impossible’ and go on to become the first team to complete the quadruple in a single season.

Following City’s dramatic late win last Wednesday night away to Schalke in the Champions League, OddsMonkey had cut the odds on a City quad to 10/1. And the fact that Guardiola’s side managed a win despite not being anywhere near their best will give the team a boost.

They are back in action on Wednesday night when they host an in-form West Ham at the Etihad as they continue to attempt to put as much pressure on a Liverpool side who have a one-point lead and are chasing their first league title in twenty-nine years.

The Blues have an opportunity to progress in the Champions League on March 12 as they host Schalke for the second leg of their last 16 tie with the advantage of having scored three away goals.

The FA Cup Quarter Final draw sees the Blues take to the road again as they visit Swansea City in an attempt to win the trophy for the first time since Guardiola arrived at the Etihad.

Let’s hope the injuries sustained by Fernandinho and Laporte on Sunday won’t prove to be too serious. If City are to continue to successfully chase the quad they are going to need all of their squad, especially such key individuals.