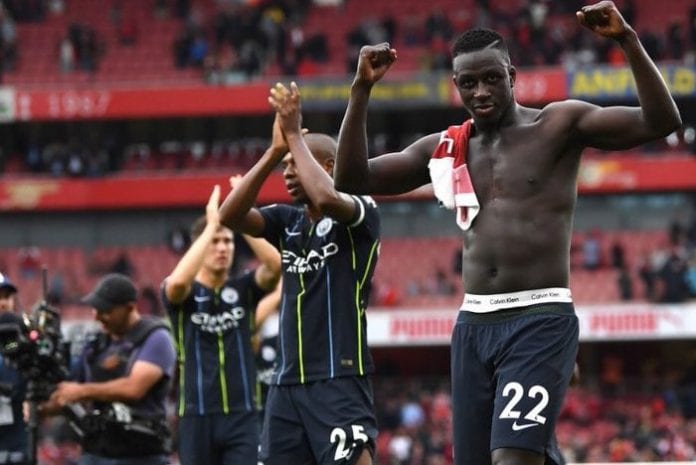 “Mendy is Mendy”. That was Pep Guardiola’s comment following Manchester City’s victory over Arsenal at the Emirates yesterday.

After missing most of last season through injury, Mendy was thrown into action in the first game of the season. And although the Frenchman made a couple of mistakes, he also added two assists to his name.

The World Cup winner set up Raheem Sterling for the opening goal of the game then Bernardo Silva for City’s second.

Last year, we saw the bromance between Silva and Mendy blossom on several occasions – none more so than when Mendy tweeted ‘he loves me more than his girlfriend’.

“I said many times, our average level is high, you cannot deny that,” said Guardiola. “I have a feeling we can improve. Like inserting Mendy into the group.

“Today our pressing was different than Chelsea. To understand that needs time. But in general, I am more than satisfied what I saw against Chelsea and Arsenal.

“Mendy is Mendy. Sometimes we want to kill him and sometimes you think ‘wow what a player we have’. He gives us energy.

“Mendy has a lot of things to improve and hopefully we can convince him to forget a little bit the social media and improve a few things.”

Pep was alluding to the left back’s presence on social media.  Mendy kept his followers entertained with his tweets last season. Let’s face it, he didn’t have much else to do.

Now, though, with so many top quality players fighting for places, he will need to concentrate on his contribution to the team

Although his two assists on Sunday will have done him no harm, there was still room for improvement – something that will come as he gets more games under his belt.

In the past, Guardiola has said that, when available, David Silva is the first name on the team sheet – how could he not be? – but that he expects his playing time to reduce this season due to his age.

The man they call Merlin has always been at the centre of everything City do well. His ability to create space and chances are absolute key to the way Guardiola wants us to play.

With Bernardo Silva showing signs of being able to take up the mantle when his namesake leaves, the Arsenal game will have alleviated many fans’ fears about finding a replacement.

Bernardo gave a very good account of himself in the pre-season tour and has carried that form on against Chelsea and Arsenal.

These past few weeks he has run the show and is providing Guardiola with yet more team selection headaches.

Perhaps more importantly than the goals we scored was the fact we didn’t concede. Last season scoring wasn’t an issue but keeping a clean sheet was.

John Stones gave a great performance and was the main reason for the Blues keeping a clean sheet.

Laporte also gave a good account of himself and having Mendy back in the squad provides that extra bit of energy we need.

Last season the Blues ran away with the league and all of the other title contenders will be looking to put a dent in City’s attempts to win back-to-back titles.

Convincing victories over Chelsea and Arsenal have shown City mean business and are not resting on their laurels.