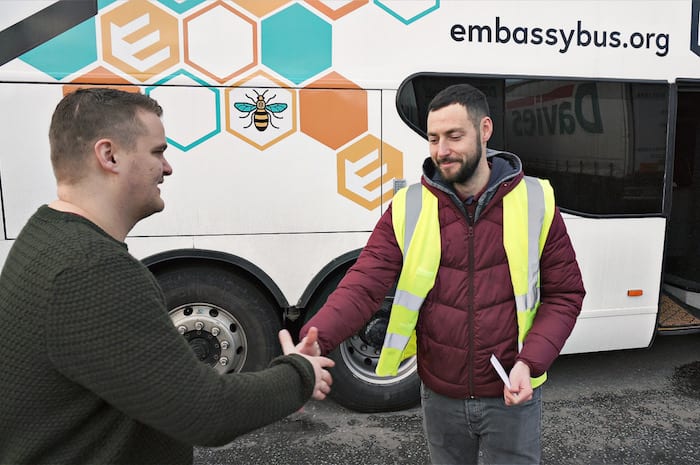 The boss of a Manchester charity had his prayers answered when the vehicle it uses to provide emergency beds for the city’s rough sleepers broke down, blocking junction 1 of the M60.

Sid Williams, founder of Embassy, was praying for help when property entrepreneur Samuel Leeds rang to say he was on his way with a donation. Not only that, it was the exact amount the charity needed to repair the bus.

“I reckoned it would cost £2,000 to repair it, but knew we didn’t have the money, so I started praying for help,” said Sid.

“Then the next thing I get a call out of the blue from Samuel saying he was heading my way with a cheque for that amount. I just couldn’t believe it.

“In the end the garage offered to do the repairs for free, so this cash will now pay for 95 nights’ off the street for the homeless which is amazing. Over 400 people died through sleeping out in the cold in the UK last year, so this donation may save some lives.”

Samuel is the multi-millionaire chairman of Property Investors UK, which teaches thousands of people each year how to achieve financial independence through buying and renting out houses.

The £2,000 donation was the amount left over from a challenge he had accepted when more than 10,000 people on his social media challenged him to prove he could build up his portfolio again from scratch.

The 27-year-old is a committed Christian who became a property millionaire at the age of just 21 and now owns 30 houses, including a historic country mansion.

His philosophy is not just to encourage people to make as much money as they can, but also to ensure others benefit from their success. He practices what he preaches, with his Midlands-based business raising thousands of pounds each year for charities at home and overseas.

One of his proudest achievements was to supply fresh water to a remote Ugandan village where children were suffering badly after having to drink from a lake.

The luxury bus, formerly used to ferry top groups such as Coldplay to venues, now provides beds for 14 people a night. It is staffed with a permanent manager and a team of volunteers.

The bus provides homeless people with food, drink and a comfy bed. It also has washing and cooking facilities plus a lounge. People are welcome to remain on the bus until suitable alternative accommodation has been found. Staff work with drug and addiction agencies to ensure clients get the support they need.

The Embassy charity, which has been backed by Mayor of Greater Manchester Andy Burnham, is hoping to buy more buses to reduce the number of rough sleepers on Manchester’s streets if it can attract enough corporate sponsorship.

“If 30 companies could offer us ongoing sponsorship, it would make an incredible difference to us – even if it is just a couple of thousand pounds a year,” said Sid.