Small local brewers whom have turned a hobby into successful businesses. 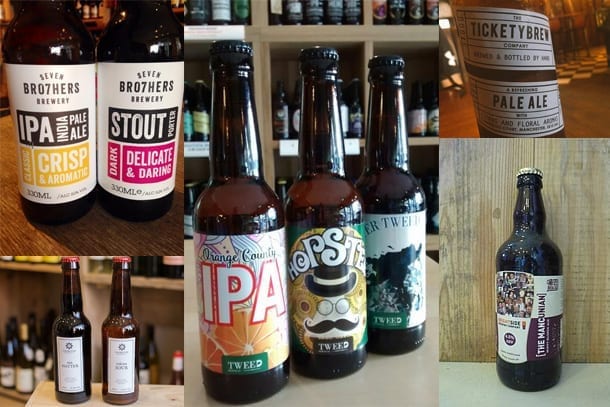 Twenty years ago, in one of the most memorable advertising campaigns of all time, Melanie Sykes served a pint of Boddingtons to a bloke in a leotard and asked him, “Do you want a Flake in that love?” Back then, the market was dominated by a handful of big breweries and Boddingtons was the cream of Manchester.

How times have changed. The Boddingtons brewery is now a car park. Some big local brewers are still going strong, of course, but they’ve been joined by a host of small local brewers, many of whom have turned a hobby into successful businesses.

Here are 20 local brewers in no particular order. Wacky names, quirky labels, delicious flavours. It’s not a comprehensive list, so please forgive us if you’re a microbrewer and we’ve missed you out. No offence. Cheers!

Radcliffe-based family bakers who decided to put the yeast to better use. Manchester Icons range of beers includes Manchester Blonde, B-Side, (a tribute to the Manchester music scene), and Manchester Skyline (“Not a bad drop at all!!! Lovely flavours!!!” (@PeterAtkinson2))

Yes, they really are seven brothers. We are unable to confirm whether they need seven brides. Watermelon beer!!?? It’s actually rather good, apparently. “The rumours are true! Seven Bro7thers know how to brew a fine session ale” (@thecooktwit)

Two students start selling homebrew at parties then go on to live the dream making American style hop-forward beers for the people of Manchester. Their IPA is “lush” (@TheBayHorsePub)

Not afraid to mix it up and experiment with far out flavours. Oatmeal Pale a “great use of hops. Love it.” (@pasteyh2g2)

One man and his garage. In a hurry? No time for breakfast? Why not try a Bottled Breakfast? Everything you need for breakfast in a bottle. Coffee, oatmeal and alcohol. Better than a breakfast bar.

‘Every beer we ever make will be unfiltered, unpasteurised and unfined.’ Contemporary seasonal sour beer inspired by Germanic traditions. Farmhouse IPA “a most wonderful and magnificent beast. Absolutely stunning” (@TheBeerHawk)

New kid on the block. “I don’t think Alphabet is capable of making a bad beer. Crate Digger Toffee Stout is “fantastic” (@mrben)

Specialists in modern, seasonal beer. “Grisette is a peachy delight. It doesn’t get more summery” (@BeerFinderGen)

One of the older local microbreweries. Started back in 2007 when owner Kevin began brewing in the airing cupboard. Thought that’s what airing cupboards were for. Orange Blossom a “nice and easy drinking ale with fruity edge” (@SirGawain82)

Beer in Stockport has changed. Dedicated to experimentation. ‘We do not pasteurise. We do not filter. The beer comes first.’ “The best” (@EuanSummers)